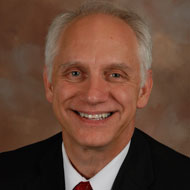 Dr. Chris Calkins, Professor of Animal Science at the University of Nebraska, is a world-renowned meat scientist who specializes in meat quality. He’s been a major professor to more than 50 graduate students who have excelled in academia, industry and government.

Dr. Calkins co-led the muscle profiling research that identified the Flat Iron steak and other value cuts with an annual U.S. impact of $1.5 billion. He is widely published and holds five patents. A former president of the American Meat Science Association (AMSA), Dr. Calkins has given numerous invited presentations in North America, South America, Europe and Asia.