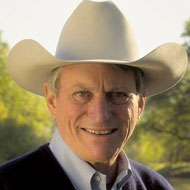 Harris Farms, Inc. was founded in 1937 by John Harris’ parents, Jack and Teresa. John Harris graduated from the University of California-Davis in 1965 with a degree in Agricultural Production, and when his father passed away in 1981, he continued to grow the diversified agricultural businesses. He expanded and revitalized beef processing and the sales force and expanded the feedyard.

Under John’s leadership, Harris Ranch has pioneered several innovations, including creating one of the first branded beef programs in 1982 more closely focusing on uniform cattle on feed, launching a line of fresh and frozen ground beef products in 1995, and pioneering the development of heat-andserve beef entrees in 2000.

Harris Farms sold its beef operations to Central Valley Meat Co. in April 2019, but Harris continues in livestock ventures today. Harris is proud to be an advocate for cattle ranching and beef production, hosting many industry and educational groups at his ranches, and he stresses that beef is a wonderful nutritious product that can also benefit the environment.