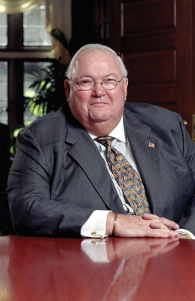 Herb Lotman, 80, husband, father, successful entrepreneur, and philanthropist, died Thursday, May 8, 2014 from complications of heart failure. Mr. Lotman was the founder of Keystone Foods, supplier of McDonald's burger patties, poultry and fish. Today, Keystone Foods is one of the world's largest food companies.

A Philadelphia native, Herb Lotman began his career in the food industry with his family's wholesale beef business. In the late 1960's Mr. Lotman and his partners pioneered cryogenics for McDonald's and developed a mass-production system for the manufacture of frozen hamburgers. By the late 60's the company was selling its new and innovative product to the Golden Arches. Keystone Foods developed and provided the first total distribution concept in the McDonald's system, enabling restaurant owners to save time and focus on customer service. They were also instrumental in helping develop the Chicken McNugget in the1980's. Lotman built the company over 40 years from scratch to one that was generating more than $5 billion in sales annually. Keystone opened operations in over 15 countries around the world and was rated 45 on Forbes' list of America's Largest Private Companies in 2010.

Six years ago Mr. Lotman retired from Keystone Foods to spend his time working tirelessly for the causes he believed in most. He was never too busy to advise or help young entrepreneurs, and there were many that came to him for guidance over the years. He was an active member of the board and shared his management expertise with several charitable organizations including the Philadelphia College of Osteopathic Medicine (where he served as Chairman for 15 years), The Children's Cancer Research Foundation, The International Board of the Ronald McDonald's House Charities, and most recently with revival of the Prince Music Theater in Philadelphia.

Mr. Lotman also co-founded the McDonald's LPGA Championship, a major women's professional golf association tournament, which directly benefited Ronald McDonald House Charities. This event raised more $48 million for the RMHC in the 29 years since its inauguration, making it the largest single fundraiser in all of golf. He also served on the International Board of the Ronald McDonald's House Charities, which supports initiatives for the benefit and well being of children worldwide.

Herb and his wife Karen established the Macula Vision Research Foundation, which is dedicated to finding a cure and restoring the vision for people who are affected by retinal and macula diseases. The foundation has provided nearly $20 million to fund groundbreaking research projects conducted by the worlds top scientists with the promise of helping millions of people affected by visual impairment. The Macula Vision Research Foundation unique is unique in that every dollar donated goes directly to find a cure, all administrative and fundraising expenses are underwritten by the Karen and Herbert Lotman Foundation.

Although he often said, "I'm just a butcher," it is clear that Mr. Lotman was an inspiration to many generations. Countless people from all walks of life benefited from his business sense and steadfast generosity. He was extremely dedicated to his family and to giving back to the community.

Services will be held at Main Line Reform Temple on Monday the 12th of May at 1pm and the interment will strictly be for immediate family members only. The family respectful requests that, in lieu of flowers, contributions in his memory may be made to Macula Vision Research Foundation, 100 Front St., Suite 300 W. Conshohocken PA 19428.

The art of tracking reusable packaging with polymer fusion labels