Beef Checkoff asks, “What’s Your Dinner Made Of?” 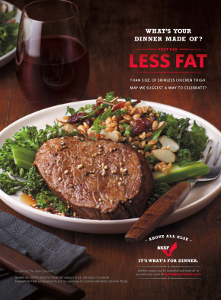 The new "Beef. It's What's For Dinner." consumer advertising campaign is premiering this month, bringing the recognizable tagline to older millennials and Gen-Xers. The new campaign, funded by the beef checkoff, will feature sizzling beef recipes, juicy details about essential nutrients and the voice of one of Hollywood's most promising new talents.

"This campaign builds upon the core benefits that only beef offers -- its great taste and 10 essential nutrients. While most folks just look at beef for its sizzle or great flavor, it's made up of more than that. Its nutrients are what make it the most powerful protein and what makes beef above all else," said Michele Murray, consumer marketing executive director, for the National Cattlemen's Beef Association, which contracts to manage advertising for the beef checkoff. "It doesn't hurt that the voice delivering the message on the other side of the radio epitomizes health and sizzle too."

The new "Above All Else" campaign aims to reach the next generation of beef eaters – the older millennial and Gen-Xer, aged 25 to 44 – who care about food and nutrition.

While keeping many brand mainstays, such as Aaron Copeland's "Rodeo" music, the new beef campaign will switch up the voice behind the famous words, "Beef. It's What's For Dinner." Sparking a new interest for the older millennial and Gen-X target, Garrett Hedlund's voice will take a starring role in the campaign's radio spots. Garrett personally represents healthful living, and his strong, warm voice is perfect for provoking new understanding about beef. "I'm proud to represent America's farmers and ranchers," noted Hedlund. "I grew up on my father's cattle operation, so I'm right at home as the new voice of beef."

Born in Roseau, Minn., Garrett spent his early years on a cattle operation. He was just 18 when he landed a role in the epic film Troy (2004) playing opposite Brad Pitt. Following his debut in Troy, Garrett went on to Friday Night Lights (2004) and Tron Legacy (2010). His latest roles include Country Strong (2011), in which he plays a rising young country star opposite Gwyneth Paltrow, as well as On the Road, in theaters now.

That's the question each "Beef. It's What's For Dinner" print advertisements asks. It's answered with bold copy highlighting the nutritional benefits of beef along with tantalizing food photography reminding the consumer that delicious can, and does, go right alongside nutritious. Each advertisement calls out an individual essential nutrient, like protein: "The Strip steak has lots of protein…and your appetite's attention." Another ad reminds you that a dinner with beef "has iron. The most lean, delicious and tender iron known to man."