With its "One Smithfield" initiative well under way, Smithfield Foods has rallied around building a company-wide culture of innovation to drive its future as a more versatile, CPG-focused, global business.

For decades, Smithfield Foods operated as one of the primary powerhouse acquirers in the meat and poultry industries, snapping up brands and businesses throughout the better part of the last 40 years. During that time, the Independent Operating Companies (IOC) strategy, by which Smithfield operated as a group of standalone, brand-oriented divisions, was developed and followed almost religiously.

But the last five years have brought a methodical avalanche of change to that legacy approach and the future path. In 2013, WH Group Ltd. (then named Shuanghui International) acquired Smithfield Foods, a move that offered the business better access to growing Chinese pork demand, but also signaled change ahead. In February 2015, the company announced the “One Smithfield” initiative, phasing out the IOC model in favor of a structure organized more closely around customer needs than brands. Ken Sullivan — who took over as president and CEO at the end of 2015 — was instrumental in the initiation of “One Smithfield” and has championed it from the very beginning.

Today, Sullivan says, with the initiative well under way, Smithfield Foods has embarked on a new path.

“The ‘One Smithfield’ initiative has been a real catalyst for improving our bottom line, but how do we grow our top line?” Sullivan says. First, Smithfield tapped company-veteran Joe Weber to be the new executive vice president of Growth and Business Development.

“I needed someone who would be focused all the time on how Smithfield gets bigger and better,” Sullivan explains. “If you don’t focus on [growth], it will have a harder time happening.”

Smithfield wasted little time developing its strategic plan for the future. When all is said and done, Sullivan says this new path will lead Smithfield Foods to being more of a consumer-packaged goods business than a traditional meat-processing company.

In the early stages of the transition, Weber collected several dozen potential action items, which were presented to a large team of company executives. That team refined and contextualized those ideas into a working plan. Each initiative in the plan (Sullivan says there are nearly 40 initiatives on the list) fits into one of several categories, from organic growth to continuous improvement, from mergers and acquisition to pivots in strategy — yet every one of them require Smithfield to be ultra-focused on innovation in some fashion.

“If we’re going to evolve, … we have to have innovation as part of our company DNA; but it can’t be something where we say it, we have to actually do it,” Sullivan says. “We’ve got to get people thinking, ‘It’s part of my job every day to think about new ways to do something,’ whether they’re in finance, support, a plant or anywhere else in the company.”

“This is not Will Brunt and the innovation team innovating, this is us teaching people how to innovate, think outside the box and challenge themselves to change,” he says. “We’re in the process of building an Innovator’s Toolkit, because we want innovation to be equally accessible to everyone.

“We’re basically trying to democratize innovation and make it everybody’s responsibility,” Brunt adds. Part of this new era of innovation revolves around acceptance of one of those age-old baseball analogies applied to the business world.

“Everyone wants the big home run, but innovation is a lot of singles,” Brunt says. “There are nine people in a lineup, and maybe one or two are swinging for the fences. Everyone else is trying to just get on base.”

To that end, Sullivan says nothing in Smithfield’s “playbook” has been off limits for the innovative thinkers in the company.

“You can’t process a pig without getting 50 pounds of ham, but the bone-in ham business is frankly a dying business in America because consumers don’t use it that way anymore,” he says. “We certainly want to migrate away from the lower-margin categories that have been the historical roots of the company.”

Sullivan points to the Smithfield Anytime Favorites brand as an example through which the company can add margin and offer value-added products that consumers prefer over the legacy products.

“We’ve got to entertain those ideas,” he says. “If you have blinders on and you’re only thinking about [the old ways], then you’re not going to be very innovative.”

Smithfield also has itself pointed toward the convenience-store channel. Sullivan sees consumers making more purchases and trips to C-stores for a wider variety of offerings.

“[C-store growth] should frighten a lot of chain businesses out there, because consumers who are there to get gas, while they’re there, can get a lunch that’s as good as any quick-service restaurant and pick up a couple grocery items too,” he says. “That’s a channel I’ve got my eye on, and we’re going to focus on pretty heavily because the paradigm of where people buy their food is changing.” 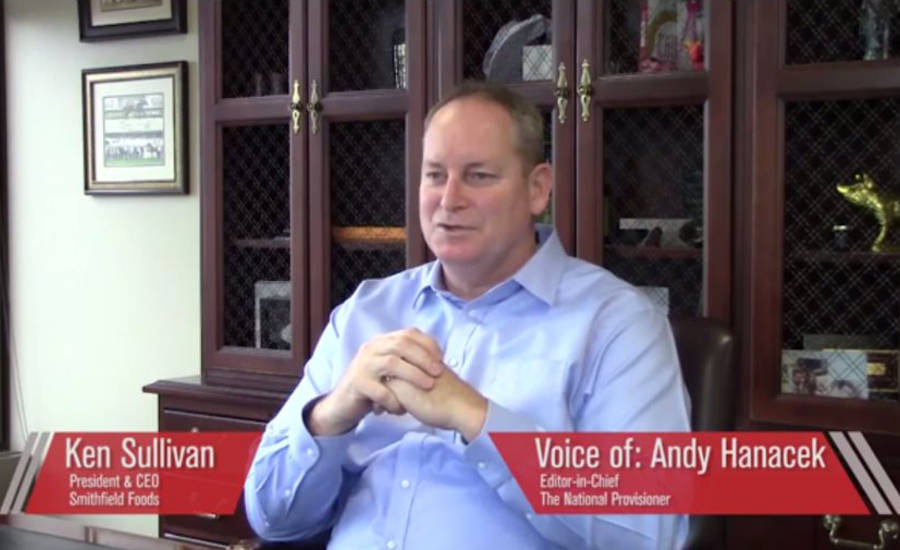 MORE OF THE STORY: Ken Sullivan, president and CEO of Smithfield Foods, spoke about the company’s new ROI Awards, a program designed to reward employees for bringing innovative ideas forward, which provided some excellent results in its first year.
Watch the video.

Although innovation often can be most evident in the products a company carries and the channels it serves, Brunt proudly talks about the innovative work being done at the operations level as well. At the Smithfield, Va., Innovation Center, the company seeks opportunities to test new configurations of equipment, new technology and improved concepts to test all the time. At the time of The National Provisioner’s visit to the center, Smithfield was considering a test on new product-conveyor technology its employees had seen demonstrated at a recent trade show, and had begun tests on new vacuum-packaging equipment, among other things.

Smithfield has taken big steps to encourage its employees to bring innovative ideas to the team. Soon, recognition will be given to any employee who offers an idea — no matter how big or small, no matter whether the idea is adopted or not. Additionally, Brunt says, the company has worked to instill a culture in which employees have the freedom to suggest ideas that could fail.

Another incentive Smithfield has offered its employees are the new ROI Awards, through which employees who served up the top innovative ideas each year are rewarded and given company-wide recognition.

Brunt calls it an exciting time to work for Smithfield because the team is poised to take the next few steps.

“You set a vision, and it’s an achievable, obtainable vision that will take a lot of work,” he explains. “We’ve done the ‘One Smithfield’ work and [most of] the transformation work, and we’re right at the cusp of the next level.”

Sullivan agrees, and relays a message he shared at the company’s first “One Smithfield” national sales meeting — the first time most of the former IOC-positioned salespeople got together as part of the same team.

“We have an ambitious plan and vision for the company that has the potential to significantly improve and grow our business,” he says. “There was an energy and spirit [at the meeting], and I have told everybody that we’re at the threshold of the golden age of Smithfield.”

By embracing and democratizing innovation, and keeping its eyes open across a wider field of opportunities, Smithfield Foods doesn’t expect it to take very long to establish itself among the top global CPG companies — a change that, just a decade ago, would seem quite out of step for a legacy pork-producing and processing powerhouse comfortable with its position and success. NP