The average hot carcass weight of U.S. pork carcasses has increased from 82 kg to 96 kg since 1995, representing an increase of approximately 17 percent. If this increase remains steady, pork carcasses are projected to weigh on average 105 kg by 2030 and more than 118 kg by 2050. Although this represents an increase in efficiency within the pork industry, there are concerns with future production. If we look at the poultry industry during the same time, we see an increase in live broiler weight from 2.13 kg to 2.86 kg, which represents a 34 percent increase in body weight. This increase in body weight often has been quoted as the source of increased adverse muscle conditions such as woody breast syndrome, muscle striping and pale, soft and exudative (PSE) meat. These conditions have led to poor eating experiences and reduced consumer confidence of poultry. This raises concerns that with the trend of increasing carcass weights within the pork industry, we might run into similar issues with quality and consumer confidence. It is important to note, however, that the weight increase in the poultry industry was twice the magnitude as that seen in the pork industry while the time it took to get to market weight simultaneously decreased.

Increased weight and size of heavy pigs has the potential to create an array of challenges with the rate of temperature decline and pork quality. Heavier carcasses have a smaller surface area to volume ratio, causing them to chill slower than lighter carcasses. Past research has shown that loins and hams from carcasses weighing 105 kg chilled slower than loins and hams from carcasses weighing 85 kg. Furthermore, slower chilled loins were paler in color, had less perceived marbling, but were more tender compared with loins that chilled more rapidly. Therefore, the objective was to characterize pork quality of carcasses ranging from 78 to 145 kg with a mean weight of 119 kg. All subsets of the population utilized the same mean weight of 119 kg.

A total of 976 pigs (PIC 327 boars mated to Camborough females) were used in a 160-day growth study focused on different space allowance and marketing strategies. Pigs were provided free access to feed and water throughout the study. The diets were corn-soybean meal-based and included 30 to 40 percent dried distiller’s grains with solubles until the final dietary phase.

The results of this study showed loin depth, back fat depth, loin weight, chop weight and ham weight increased as hot carcass weight increased. On the other hand, there was a decrease in estimated lean, which is most likely because of the increased back fat from heavier pigs. Furthermore, iodine value decreased as carcass weights increased. In regard to ham quality, increasing weights had no effect on gluteus medius pH, instrumental lightness, redness or yellowness. Similarly, increased weights had no effect on early loin or 14-day aged chop quality, including pH, instrumental lightness, redness, yellowness, visual color, marbling, firmness and chop moisture and lipid percentages. Increased carcass weights did, however, lead to a slight increase in early loin instrumental yellowness. While yellowness is something we measure as a part of quality, most consumers do not associate yellowness with fresh pork quality, therefore it is not a meaningful finding. Chops from heavier carcasses were more tender with less cook loss. Additionally, increased carcass weights had no effect on muscle fiber type percentages or fiber type area. 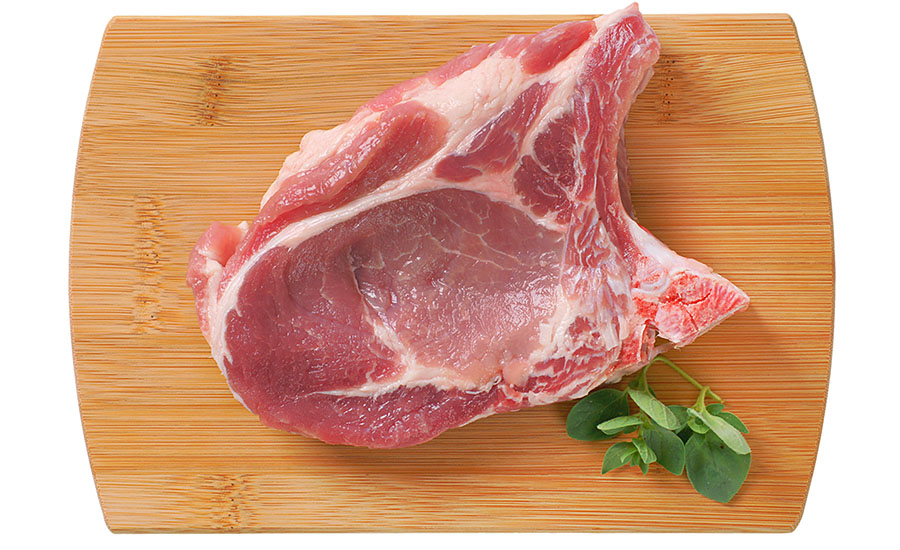 Despite the issues seen within the poultry industry from an increase in broiler weight and growth rate, the results from this study should help alleviate some of the concerns for the pork industry. Increased carcass weights had no or limited impact on pork quality traits such as pH, instrumental or visual color, water-holding capacity, or tenderness. NP

Hannah Price is a student at the University of Illinois and placed 2nd in the Master Research Competition at the American Meat Science Association’s 72nd RMC in Loveland, Colo., this past June.

Does quality, safety get a cold shoulder?

Get knocked down, get back up