The meat industry managed a successful 2021 in spite of the issues that will remain problematic in the New Year.

Despite multiple hurdles, the U.S. meat and poultry sector has achieved remarkable success in 2021.

Maintaining a stable labor force along with supply chain issues such as trucking, ingredient availability and CO2 availability were the greatest challenges for the meat industry this year, says Sarah Little, vice president of communications at the North American Meat Institute, in Washington, D.C. Unfortunately, supply chain disruptions such as port congestion will continue into 2022, she says.

“For most of this year, for the meat protein industry the traditional rules of supply and demand haven’t necessarily applied because we are not nearly producing at our current capacity and the limitations are not what they traditionally are,” explains Todd Southerland, Atlanta-based Truist’s senior vice president of food and agribusiness industry. “Usually, you see a cycle that’s driven by higher raw material prices, which are feed grains, higher corn and soybean prices. Those rising costs can result in livestock producers lowering their animal populations.”

Instead, the industry was not anywhere near capacity of processing animals per day of beef, pork and chicken, he says. From plant employees through transportation of product, Southerland says the lack of labor has made it difficult for processors to process and ship product.

Additionally, commodities are elevated and should remain elevated in 2022, Southerland says. With the supply chain not operating at full strength because of logistics slowdown, forecasting supply availability or quantifying foreign demand also has been difficult, he adds.

Exports play a major role in agriculture. Today, trade accounts for 10% to 30% of U.S. animal protein production, depending on type. For example, more than a quarter of U.S. processed pork left the country in most months this year. “Given the U.S. growing appetite for meat and moderation of supply base, it will be difficult to grow this portion of the balance sheet in the coming years,” Earnest says.

China has become a major destination for global proteins. But as the country’s domestic supplies rebound from being decimated by African Swine Fever (ASF), China’s reliance on U.S pork waned mid-year. Monthly, U.S. red meat and poultry exports to China went from roughly 20 to 30 million pounds from 2015 to 2018, to peaking at 350 million pounds in 2020. Demand scaled back to less than 150 million pounds per month since then, Earnest says.

“As large-scale hog farming grows in China and domestic supplies recover from ASF, reliance on U.S. pork and poultry is not likely to rebound in 2022; however, U.S. beef exports to China have grown exponentially,” he says. 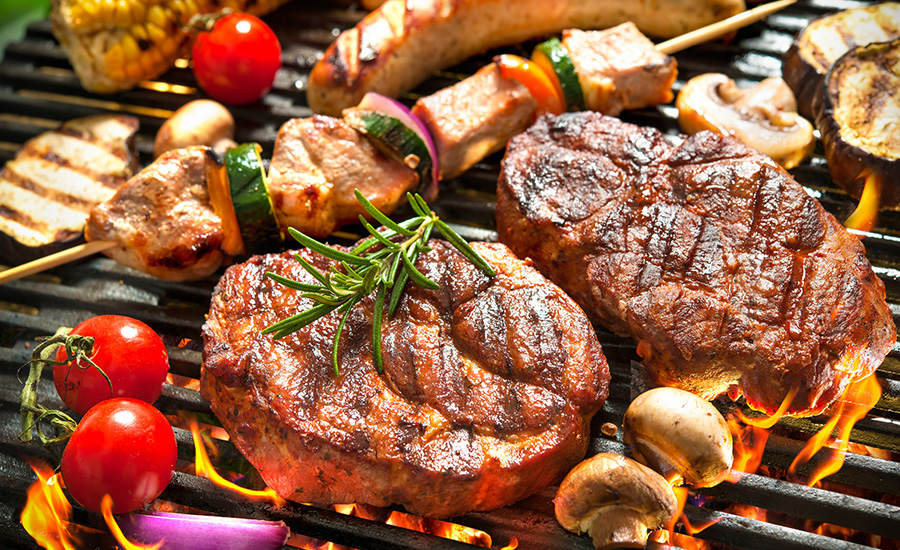 Domestically, this year saw the kick-off to grilling season coincide with a push to reopen the dining segment as restrictions eased following a perceived drop in COVID-19 risk, Earnest says. Both were beneficial to meat and poultry demand. This winter will likely be challenging for the restaurant sector as COVID-19 remains a consideration among dining patrons.

Tracking trends across red meat and poultry items, freezer inventories have been drawn down more than 16 percent from a year ago, to decade-low levels, despite accumulation to record-high levels in some items, such as breast and leg meat along with pork loins in 2020, Earnest says.

Key meat items such as chicken breasts and ground beef have maintained elevated price levels, which has helped to offset elevated grain and labor costs. “Consumer sentiment has yet to reflect the entirety of wholesale inflation as it is slow to transition through grocery aisles and menus,” Earnest says.

Unfortunately, meat and poultry production is a labor-intensive good. Earnest says it is not uncommon within the industry to hear of processors raising wages 20% to 25%or even higher when compared with pre-COVID pandemic levels. “Keeping plants fully staffed was a challenge prior to 2020,” he says. “Some areas will likely have to deal with staffing levels down 15% to 20% from pre-pandemic levels for quite some time.”

During the pandemic, the most common response of employers was to raise wages, Southerland says. Cost of an employee now averages $18 to $20 an hour in some regions, and these additional costs have a direct impact on retail food prices, he says. Not surprisingly, these labor challenges coupled with higher commodity prices have caused food prices in grocery stores to increase, which isn’t necessarily a bad thing for the meat and poultry industries.

“Our food system is rooted in commodity industries, but it is also the most diverse and differentiated food supply in the world, which drives significant value with consumers,” Southerland says. “The reality is that a good share of today’s price increases will have lasting effects long past this commodity cycle, which is perfectly acceptable because the revenues are being directed to the right people: farmers, ranchers, laborers and other producers that have struggled historically due to receiving a disproportionate share of industry revenues. In that respect, if food manufacturers can embrace and leverage the power of their supply chains and these critical commodity partnerships, the rising tide will have a way of lifting all boats.”

While the meat sector saw plant capacity not fully used in 2020 or 2021, more production will be brought online in the years to come, Earnest says. “There have been multiple proposals for new beef packing facilities publicized this year, but adding plants will likely increase competition for labor, further complicating staffing,” he explains. “In addition, the cyclicality of cattle supplies suggests reduced cattle to process beyond 2021.”

In turn, the World Agricultural Outlook Board forecasts moderation of total red meat and poultry production for 2021 and 2022 with 2020 totals. Within the sectors, broiler production is seen at a moderate rise, up about 1% in 2022, while beef production is forecast to fall roughly 3% in 2022 after peaking in 2021. U.S. pork production is seen relatively flat.