Texture ranks as one of the four compass points — along with flavor, appearance and aroma — that determine the success of a food product.

A coating uniquely embodies all the key traits in a finished food product — texture, appearance, flavor, and even, in most cases, aroma. With the increased demand for clean-label nutritious foods, developers are leveraging food coatings as a way to take those attributes and build healthfulness into texture in products designed to meet such requirements.

Today’s consumers are prioritizing convenience, affordability, and nutritional value when it comes to the foods they are purchasing. Consequently, frozen and prepared ready-to-eat (RTE) foods have become even more essential as people continue to balance health with economy and time. According to the American Frozen Food Institute, sales of frozen foods in the U.S. were up by 21% in 2020.

Consumers also continue to expand their palates and interests in new flavors, textures, and specialty diets. This has resulted in a greater call for innovative clean-label products. Moreover, they are ever more cognizant of the link between diet and immunity, leading to a heightened awareness of nutrient-based claims. As a result, snacks, meals, and sides with high nutritional value and “free from” claims — but also alluring flavors and textures — are now the rule.

One of the most prominent dietary restrictions among consumers today is gluten avoidance. The overwhelming demand for gluten-free products in every food and beverage category is now mainstream and here to stay. To meet the gluten-free criterion, dried vegetables (such as cauliflower and peas), along with whole-grain ingredients such as flours and starches from brown rice, corn, tubers, and ancient grains, are replacing traditional wheat flour to yield gluten-free breadings for even the most traditional products, such as chicken tenders and fish sticks.

Another area of interest in food coatings innovation is reduction of ingredients such as sugar, fat, and salt, along with removal of allergens. Accompanying this is an effort to fortify food coatings with functionally nutritious ingredients, such as seeds and ancient grains, including chia, quinoa, millet, hemp, flax, and amaranth.

Even in gluten-containing food coatings, the clean-label trend dominates, with the use of whole-grain wheat flour, spelt, oats, and barley gaining considerable popularity. In some cases, brands are also replacing starches with soluble fibers in order to reduce calories and make fiber-based front-of-package claims, such as net carb declarations and “keto-friendly” identifiers.

Developers must work through some key challenges when formulating a healthier coated or enwrapped food. Traditional starches, such as modified corn starch, offer predictable and reliable functionality. “These are the backbone of the formulation, holding the batter together and allowing it to set when cooked,” said Ryan Erwin, food chemist and innovation manager for natural foods manufacturer Fresca Foods Inc. “In breaded applications, starches are used to ensure that the breading adheres to the substrate throughout frying, freezing, and reheating. Starches are also the key to developing the crispy and crunchy texture of breaded and battered products.”

Animal protein substrates lead the coated foods category, with items such as chicken tenders, seafood, and fish being most common, both in retail and food service settings. Yet in 2020, 47% of U.S. consumers reported a desire to reduce their meat intake, and globally, other countries reported similar statistics. Consequently, the demand for plant-based meat and seafood alternatives has risen rapidly, challenging food manufacturers to innovate coatings for plant-based applications as well.

Plant-based protein sources, including pea, chickpea, mung bean, and fava bean, as well as mushrooms and even algae, are the main components used to create a substrate for food coatings. They typically are combined with starches, such as those from pea, chickpea, and tapioca, to carefully mimic the density and texture of animal proteins.

Animal proteins are easier to coat than plant-based proteins, and thus developers have the challenge of creating functional formulations of batters and breadings to ensure that consumers experience optimal appearance, taste, and mouthfeel in meat alternatives.

For plant-based battered or breaded products, such as vegetarian nuggets or vegan battered “shrimp,” developers can turn to a blend of clean-label starches that provide effective adhesion functionality, along with protective coating functionality to reduce oil pick-up and prevent sogginess. Native starches, such as tapioca starch, potato starch, and corn starch, have turned out to be effective replacers of refined modified starches, dextrins, and methylcellulose.

Still, some adjustments are needed when replacing traditional starches with clean-label soluble fibers, such as pea flour, corn flour, or brown rice flour. This is because these ingredients can alter the adhesive properties of the breading. The high heats used to set breadings and batters can cause fibers to break down in some formulations, reducing crispiness in the final product.

As functionality with less mainstream ingredients is far less predictable than in traditional formulas, developers making use of more novel ingredients in the food coatings space might require more extensive pilot-scale testing. They will find a distinct advantage in working more closely with available technical resources and expertise. 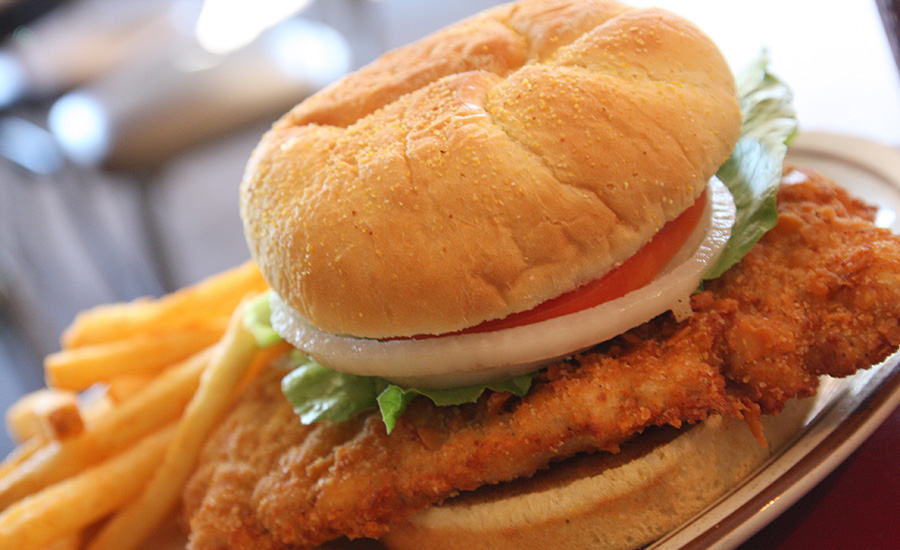 Reducing fat, sugar, and sodium is another major area of focus for product developers in the arena of better-for-you food coating formulations. Replacing traditional, hydrogenated fry oils with healthier vegetable oils is relatively easy for most developers, allowing for “0g trans-fat” and “0g saturated fat” claims that are highly sought after by consumers these days.

Sugar reduction can be aided by the addition of natural flavors, such as sweetness enhancers and modifiers. Similarly, the sodium content of a food coating may be drastically reduced by using umami-rich flavor boosters, such as light-colored soy sauce powders, yeast extracts, cheese powders, or mushroom powders.

Novel coatings and crusts, such as cornbread, parmesan, and tortilla strip crusts, may be utilized along with gluten-free, high-fiber, or high-protein flours to offer a diet-friendly breading that still allows a consumer to indulge in coated foods. Future opportunities will continue to arise in formulating vegetable-based and gluten-free coatings that entirely mimic traditional counterparts in terms of texture, appearance, and, of course, flavor.

The increased popularity of at-home air frying allows manufacturers to deliver on the desired crispy texture while drastically reducing the amount of fat in a formulation. The key to formulating a successful air-fried product is starch selection. Developers must ensure that the batter or breading will crisp up to the desired degree to mimic a deep-fried product. In some cases, this can require additional oil in the coating or batter matrix.

Still, with novel starches and flours in the mix, working with fat and oil suppliers to find the right oil for the product can ensure that functionality and health don’t clash. Many healthful oils tend to have lower smoke points than traditional frying oils. But there are sources that can serve both demands. Coconut oil is able to stand up to frying temperatures of around 365°F, but it also imparts its own flavor. That can be an advantage in sweet formulations, but might be less desirable in savory ones.

Olive oil and avocado oil have high smoke points, as do rice bran oil, sunflower oil, and sesame oil. The latter works especially well with Asian and Asian-style products. Chia oil has turned out to be a star oil for combining the high smoke-point functionality of frying with a healthful, high-omega profile.

As the health and wellness trends continue to dominate across food categories, innovative coatings, batters, and glazes using gluten-free and high-protein ingredients will become the rule rather than the exception in coated and battered products. Better-for-you whole-grain and native flours and starches from sources ranging from roots and tubers (tapioca, potatoes) to nuts, seeds, and ancient grains (quinoa, millet, amaranth) to dried vegetables and even protein crumbles also add to the halo. Even the right healthful oils with smoke points able to stand up to air fryer temperatures, such as from chia and avocado, lend a more attractive nutrition profile.

Olivia Conrad is a product development scientist and freelance science writer in Boulder, Colo., with a degree in Food Science from the University of Maine. She has extensive experience in natural foods product development in categories ranging from frozen desserts to meat snacks. She also is an expert in food safety with a strong working knowledge of FSMA and HACCP principles. She may be contacted at oconrad2013@gmail.com.

Olivia Conrad is a product development scientist and freelance science writer in Boulder, Colo., with a degree in Food Science from the University of Maine. She has extensive experience in natural foods product development in categories ranging from frozen desserts to meat snacks. She also is an expert in food safety with a strong working knowledge of FSMA and HACCP principles. She may be contacted at oconrad2013@gmail.com.