Gordon Bethune, former CEO and chairman of Continental Airlines, offered attendees at the keynote session Friday at the AMI Meat, Poultry & Seafood Convention and Exhibition insight into how he turned around the airline, which he called “the most dysfunctional company I’d ever seen” when he first arrived at the company.

When Bethune was asked by Continental’s board of directors to form a plan to revitalize the company, he developed a “Go Forward” plan — a four-point strategy that would turn Continental’s fortunes around rapidly. 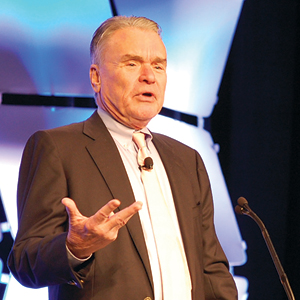 Go Forward, he says, included the typical market strategy and financial plans, but added product and people plans to provide backbone AND muscle to the first two strategies.