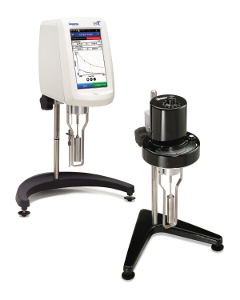 In 2014 Brookfield Engineering is celebrating 80 years of innovation and customer service. It began in 1933 when Donald Brookfield, Sr. envisioned a new, unconventional approach to measuring viscosity. His experimentation with motors and springs in the basement of his family’s home resulted in the creation of a single-speed instrument that would ultimately become known as “the world standard” in viscosity measurement and control.

Founding the business in 1934, Don made it his priority to offer “the highest quality instruments at the lowest possible price.”  Over the years he demonstrated this commitment to service by offering his loyal customers his newest innovations at little to no cost. Through the middle years Brookfield Engineering addressed issues of temperature control, small sample volumes and very low viscosities, continually adapting to the changing needs of industry. As technology marched forward, Brookfield answered the call by producing a wide range of digital and programmable viscometers & rheometers that operated in stand-alone or PC controlled modes.  They also developed a complete range of in-line Process Viscometers that enabled manufacturers to measure viscosity continuously during production.

In 2004 Brookfield entered the Texture Analysis market, providing a perfect complement to their line of R&D and QC testing instrumentation. The CT3 Texture Analyzer initially targeted the food manufacturing industry, but was later expanded to measure the mechanical flow properties of a wide variety of products in cosmetics, pharmaceuticals, and packaging. And in 2010, the PFT Powder Flow Tester made its debut, providing quick and easy analysis of powder flow behavior in industrial equipment.

Most recently, Brookfield has added touch screen technology to several of their most popular instruments, continuing to innovate and address their customers changing needs.

The art of tracking reusable packaging with polymer fusion labels