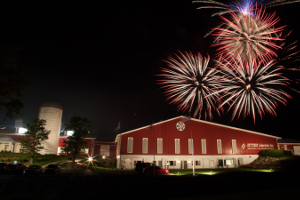 On September 20, 2014, Bettcher Industries marked its 70th anniversary with a big celebration at the company’s headquarters facilities in Birmingham, Oh.  The manufacturer of precision trimmers and other cutting tools for the food processing industry, foodservice establishments, industrial and medical applications has been a major employer in the Northeast Ohio region for decades.

The 70th Anniversary event was held at Bettcher’s corporate campus on the afternoon and evening of a weather-perfect Saturday.  An open invitation for members of the local community to join employees and their families, Bettcher retirees, business partners and suppliers in the festivities resulted in more than 1,000 people attending the event.

In addition to live music, great food and all sorts of activities for the kids, plant tours led by Bettcher employees gave attendees the opportunity to walk through the original “Bettcher barn” headquarters building dating from the early 1970s, as well as a second “twin” structure that opened in 2008 when the company completed a major corporate expansion.

The tour gave visitors the opportunity to view Bettcher equipment, watch product demonstrations and see the company’s state-of-the-art engineering design and manufacturing spaces.  Attendees were also treated to an impressive array of historical farm implements on display in the buildings – items personally collected by Bettcher’s retiring chairman Larry Bettcher over the past four decades.

The day’s activities culminated in a gigantic fireworks display that could be seen from miles away (and also an impressive eye-catching attraction for motorists passing by on the Ohio Turnpike adjacent to the campus).

Karin Hamrick, an Amherst resident who has worked at Bettcher for nearly 25 years, commented that quite a few visitors were surprised at the breadth of products manufactured by the company.  “People consider the barn-like Bettcher buildings distinctive landmarks due to their prominent location right on the Ohio Turnpike midway across the state from west to east,” she noted.

“They had always wondered what we make here, so they were very interested in seeing our products.  They were also surprised to learn that more than half of the products we manufacture are sold to customers outside the United States,” Hamrick continued.

Hamrick is emblematic of Bettcher’s experienced and loyal employee base.  With many longstanding workers in its ranks, the average employee tenure at the company is nearly 15 years.

Don Esch, Bettcher Industries’ recently appointed CEO, explained that the 70th Anniversary event had another purpose as well:  to celebrate the career of Larry Bettcher, the company’s chairman who announced his retirement on October 1, 2014.

“Larry was an integral part of this company and its successful track record of growth ever since joining the business in the late 1950s,” Esch noted.  “In recent years, it was an honor to work alongside Larry in strategically positioning the company for continued long-term growth and success worldwide.  And now, we look forward to the contributions Larry will continue to bring in his new role as a member of our board of directors,” he added.

Established in 1944, Bettcher Industries is a leading developer and manufacturer of innovative and precision cutting tools for food processing, foodservice, industrial and medical applications.  Based in Birmingham, OH, the company is an ISO 9001-certified company with direct distribution and service in more than 60 countries throughout the world.

As of October 1, 2014, Bettcher Industries completed its transition to becoming a 100% ESOP (employee-owned) company.