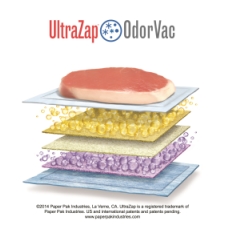 Paper Pak Industries, the leading manufacturer of active packaging technology for the food industry, has developed UltraZapOdorVac, a revolutionary active absorbent that simultaneously captures any confinement odors and reduces bacterial growth in the purge.

Confinement odors are generated from the breakdown of amino acids present in proteins, either by microbiological or by enzymatic action. The purge is rich in proteins so it can become a good source for the generation of volatile organic sulfur or nitrogen compounds (VOSCs or VONCs).

Jensen observed, “The purge is effectively trapped by the UltraZapOdorVac active absorbent, providing the opportunity for PPI’s proprietary mix of active ingredients to capture these odor-causing compounds. It is important to note that the active ingredients in UltraZapOdorVac are GRAS (Generally Regarded As Safe), comply with USDA regulations, and require no additional labeling modifications.”