Blockchain for the Beef chain

The IBM brand isn’t often associated with the cattle business. But that may change, thanks to the tech giant’s IBM Food Trust and its use of blockchain. That’s just what it sounds like: blocks of information that form a chain, linked via Internet to allow information sharing that is seamless, efficient and secure.

Its primary application is between partners across an industry striving to achieve improved transparency, traceability, sustainability — and ultimately even profitability.

Nigel Gopie, marketing leader for the IBM initiative, told 200 cattlemen at the late-summer Feeding Quality Forum in Sioux City, Iowa, the system offers trust and transparency in places where it either doesn’t exist or could be improved.

“In the food industry, in particular,” Gopie said, “there are a lot of concerns about food safety, food fraud, sustainability and others. We believe that, with blockchain, we can bring light to problems that have plagued us for centuries.”

Take food safety, for example. With blockchain, the source of contamination could be pinpointed easily — no more long-lasting scares like the one in late 2018, in which consumers were told to avoid romaine lettuce for months.

“With blockchain, we’re able to solve problems that we never could solve before,” Gopie said.

The benefits of sharing information works both directions.

While the audience of quality-focused cattlemen was intrigued, many had the same concern, voiced in a question: Is it secure? Gopie assured them it is. 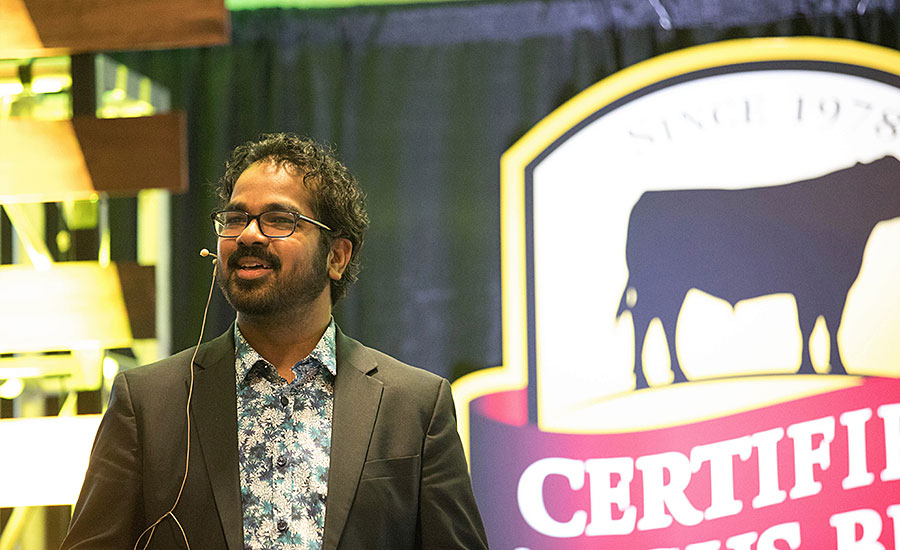 “With blockchain, your data belongs to you,” he said. “We believe your data does not belong to the solution, nor does it belong to your transaction partners. And so, your data is held in secure environments and it’s only shared when you want to share it. It’s encrypted and no one can get access to that data unless you permission it.”

He added cattlemen have flexibility when it comes to sharing, too.

And what about liability? Would a rancher or feeder be responsible if E. coli were traced back to his operation? What would that look like?

Gopie said blockchain is about fact-finding, not fault-finding. Beyond that, it’s important to remember an outbreak may not be related to time on the hoof anyway.

“It could’ve been any point during the supply chain, but by having the visibility, you’re able to help figure out where different paths cross, and then you’re able to identify the problem,” he said. “So, it may not be on a farm at all. However, if it is on your farm, wouldn’t you want to know? Secondly, if it was not on your farm, you’d also want to share that information. You would be able to say, ‘I understand it was Nigel’s farm that had that problem and we’re all there to help and ensure that doesn’t happen again. But also, my stuff is safe.’”

That’s only one part of the equation. In a much bigger sense, blockchain’s application can allow a new and better way for consumers to feel connected to their food from pasture to plate.

“A lot of us folks who live in a city love the idea of understanding where our food comes from, seeing pictures of where our cattle are raised. I think that sort of connection allows us to feel closer with the food that we’re eating, realize that the men and women who are raising these products really care about them, and it’s the same thing that they would feed their families at home,” Gopie said. “And so, it provides us with a little more trust about the entire system by allowing that connection to take place.”  NP

The forum was presented by the Certified Angus Beef (CAB) brand, with co-sponsors Where Food Comes From, Roto-Mix, Feedlot Magazine, Tyson Foods, Intellibond, Zoetis and Diamond V. For more information on the meeting proceedings, visit www.feedingqualityforum.com.

Blockchain technology and its potential for the meat and poultry industry