Burgers continue to innovate with new formats, flavors and patties.

Americans’ love affair with burgers isn’t over. In fact, it’s only just begun.

“Overall, it’s a classic — like fries, people love burgers,” says Maeve Webster, president of Menu Matters, based in Arlington, Vt. “They are easy but can be endlessly innovative, they resonate across all demographics, they come in a wide variety of sizes and flavor profiles and can be made to fit nearly any taste.”

They are affordable but high-end, premium options are also available. “I can’t imagine there will be a time anytime soon when chefs say, ‘That’s it … we’ve done all we can with this category,’” Webster says.

It’s hard to argue with the numbers: 97 percent of consumers report knowing about burgers, 93 percent have tried them and 48 percent have eaten burgers many times, according to Mark Brandau, group manager at Datassential, based in Chicago.

“Nearly every consumer surveyed is familiar with a burger and has tried one, with about half saying they’ve consumed a burger many times,” Brandau says. “Unsurprisingly, that puts burgers in the 99th percentile among consumers for experience with this item.”

Perhaps more important, 84 percent of consumers either love or like burgers.

“As a category, burger shows a lot of breadth as well as depth, because the menu penetration for things like veggie and turkey burgers, sliders and all the different flavor profiles contained within the most popular sauces on U.S. burger menus show a very diverse range of tastes and applications,” Brandau says.

Cheeseburgers, for example, are on more than half of all restaurant menus in the U.S., says Brandau. 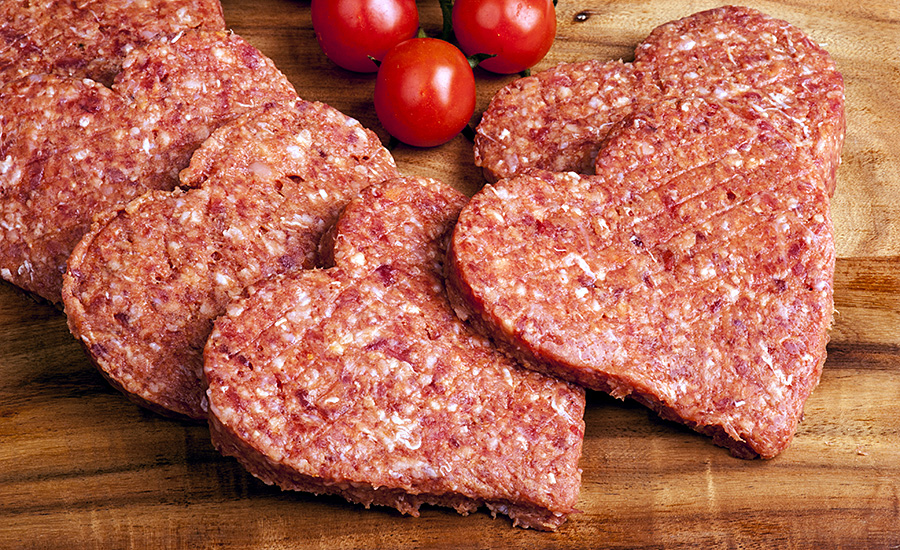 “About four-fifths (79 percent) of consumers order burgers away from home at least once a month; the burger LSR (limited service restaurant) category earns over $80 billion in total sales, far more than any other sector, and burgers are the fourth most common entree on Top 500 chain menus,” says Lizzy Freier, managing editor at Technomic, a Winsight Co. based in Chicago, referring to Technomic’s 2019 Burger Consumer Trend Report.

The result? “As such, the category is hyper competitive, with traditional chains and emerging players alike looking for what’s next to stand out in a crowded field,” Freier says.

Even the rise of plant-based burgers only serves to reinforce diners’ love of burgers.

“The ‘state of burgers’ is stronger than ever, because the rise of plant-based burgers is giving a new avenue to growth for a category that’s already one of the most loved and well-established in the U.S. restaurant industry,” Brandau says.

If anything, Webster says, plant-based burgers have increased interest in burgers overall, and will ultimately drive traffic from or back to animal-protein burgers.

“Currently, much focus is being placed on several disruptive forces, including plant-based burgers, third-party delivery, rising costs and ongoing demands for innovation,” says Freier. “Together, these are significantly impacting the burger sector, pressuring operators to continually update this classic sandwich while maintaining profitability.”

Operators’ ability to adapt to these trends without depleting their value proposition will be key as price increases for burgers have already been noticed by many consumers, often affecting their behavior, Freier says.

As it stands, most consumers buy burgers from Quick Service Restaurants due to their accessibility, notes Mintel’s Burger Trends - U.S. - April 2018 report. Fast casual restaurants struggle with standing out with their burger offerings, while full service concepts have to improve their convenience, said the report. 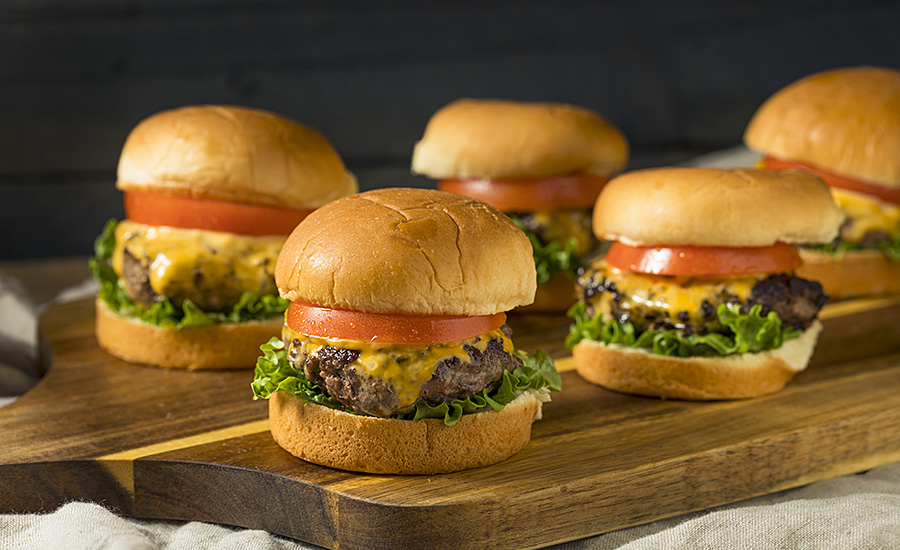 “Beyond the plant-based iterations, we’re seeing innovation in a few different ways,” says Webster. “Since it is such a popular format there are operators who are trying to make it work at breakfast and brunch with versions that include eggs as a garnish, sausage-style proteins (pork with sausage flavors, etc.) as the base, and other garnishes like hash browns, savory jam, etc.”

Breakfast burgers and brunch burgers have more than doubled their menu penetration, Brandau says. “This can mean both that the burger is expanding into the morning daypart or that breakfast flavors like a fried egg are showing up on burgers more,” he says.

Other operators are trying to stretch the versatility of menu items to work as garnishes, such as mac and cheese, fries, onion rings, etc.

WHAT'S IN THE BEEF?

“Certainly any on-trend produce, condiment or other flavor is being applied to burgers, including sriracha, beets, kale, pimiento cheese, etc.” Webster says. “These burgers can range from extremely innovative with several ingredients that are very early in the trend cycle to more traditional formats that include only one ‘out there’ ingredient.”

Generally, it appears most of burgers’ innovation today is around the garnishes and carriers, rather than the proteins — excluding the plant-based options that are making a splash, Webster says.

“And the 18 percent growth in ‘build your own’ shows greater adoption of customization in burger menus,” Brandau says. 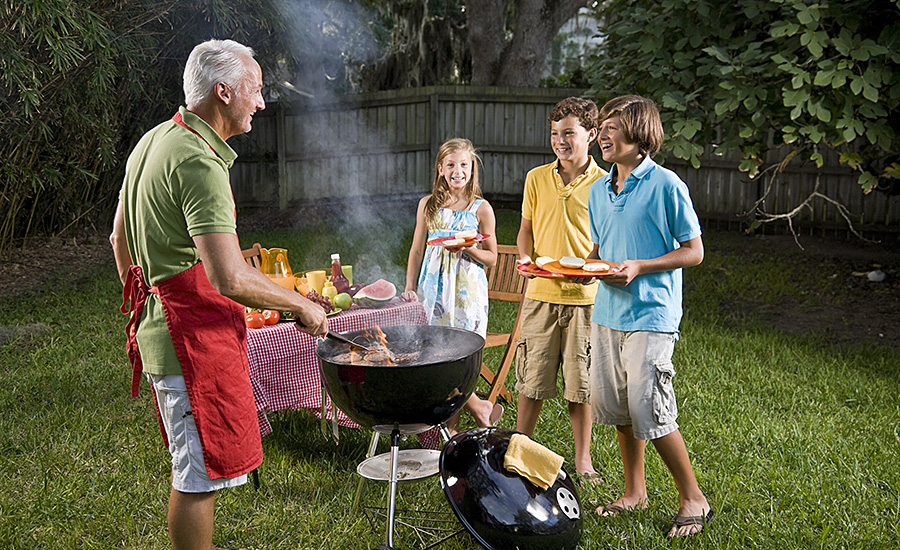 “I think it won’t come as any surprise that younger consumers have a significantly wider comfort zone than any other cohort, and that comfort zone will only continue to expand with each successive generation,” Webster says.

Gen Z, the youngest generation, is looking for something more interesting than standard burger options, such as world-cuisine-inspired or sourced garnishes and condiments.

“I think they are open to alternative proteins, but beef still reigns,” says Webster.

Overall, American palates are far more accepting of sour and bitter flavors as long as there’s a good balance.

“Burgers aren’t usually the typical platform for these flavors, but when incorporated in the right way with targeted cheeses or proteins — then balanced with other flavors — they can create unexpected burger experiences,” Webster says.

The hype around plant-based burger options may speak to consumers’ continued search for indulgent items that don’t make them feel guilty, says Webster. “They want their burger without feeling like they are really blowing it from a diet/nutrition point of view, and those burger options certainly fit the bill for the time being,” she says. 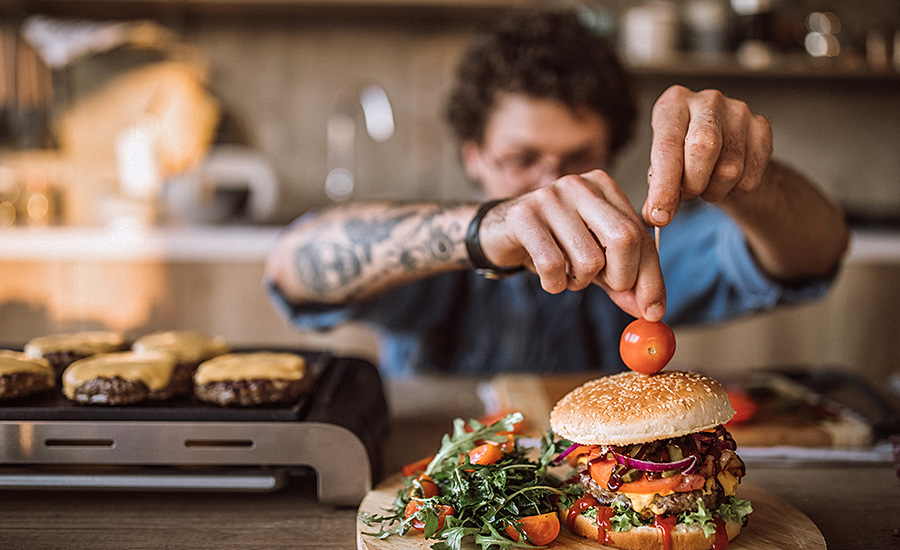 Restaurants continue to experiment with new, upscale proteins such as bison and chicken in creating burgers, Brandau says.

“Again, plant-based is far and away the fastest-growing type of burger patty, but more upscale, higher-quality types of beef are finding their way onto menus, often blended with other cuts of beef,” Brandau says.

Wagyu beef is growing faster than Kobe beef, which is decelerating on American menus. “And since they’re so similar, it’s hard to define what could be causing the opposite movement in trends for them,” Brandau says.

Black-bean burgers and veggie burgers are also growing in popularity, and technically are plant-based. “But the data here reveal that the term ‘plant-based’ in a menu description is particularly salient right now for consumers and for menu makers,” Brandau says.

Most of the time, a menu description of a burger will just include a generic “cheese,” often thought to be American cheese by default.

“But cheddar and Swiss are also popular, as is bleu cheese, which I didn’t expect to be that high (one in five American menus that have burgers),” says Brandau. “What’s interesting is that cheddar is growing so rapidly off an already high base, and what’s clearly resonating with consumers is a description of the origin of that cheddar. In this case, it’s Tillamook Cheddar from Oregon.”

Healthful-eating trends in burgers aren’t limited just to patties made from plants. “The menu penetration of gluten-free buns doubled over the past four years,” Brandau says. “The growth of ‘no bun’ burger descriptions also speaks to the sustained popularity of low-carb and ketogenic diets.”

Still, there’s plenty of enthusiasm for fancier breads and buns, such as brioche and multi-grain.

“The pretzel-bun craze on burger menus has likely subsided, but it’s leveled out to a healthy amount of menu penetration,” Brandau says.

Burgers will always be a favorite, and have many avenues to remain relevant and on trend. NP

“Plant-based burgers are the fastest-growing kind of burgers on American menus, and it’s not even close,” says Mark Brandau, group manager at Datassential, based in Chicago.

While veggie or bean burgers have been around for decades, the plant-based burger category has exploded in the past year with launches from the Impossible Burger, Beyond Burger and Awesome Burger — with more on the way. Their claim to fame is they taste like meat even though they are meatless.

It remains to be seen if these veggie patties will lead to a lasting change in the burger category or are just temporary shiny objects for health or eco-conscious consumers — or those just looking to try something new.

“This kind of item has a long way to go still to achieve the level of familiarity we have for cheeseburgers — or even for veggie burgers — so demand for this offering is likely to stay high for years to come,” says Brandau.

The sevenfold increase in menu penetration for “plant-based burgers” over the past four years puts it on par with some of the other fastest-growing flavors and dishes in the restaurant industry, such as avocado toast, Nashville hot chicken and kombucha, Brandau says.

“Forty-six percent of operators are selling more veggie burgers now compared to a year ago,” says Lizzy Freier, managing editor at Technomic, a Winsight Co. based in Chicago. “Forty-two percent of 18- to 34-year-old consumers expect restaurants to offer at least one plant-based burger option and 37 percent would like restaurants to offer a variety of veggie or plant-based burger patties,” according to Technomic’s 2019 Burger Consumer Trend Report.

That said, plant-based burgers still have very low penetration, so it’s hard to say how they really are doing. “There’s a ton of hype around the category with extremely high profile rollouts by major chains,” says Maeve Webster, president of Menu Matters, based in Arlington, Vt. “But I wonder how much of the traffic connected with these products are trial only rather than true conversion.”

According to Brandau, half of consumers have no opinion on plant-based burgers, “in contrast to consumers’ very formed opinions of burgers in general (84 percent like or love them, but only 4 percent dislike or hate them).”

“My guess is maybe most people who went in to try these products were curious about them because they are so unusual based on other plant-based options that preceded them, but you’ve got a very small share who are truly working them in to some or most of their burger occasions,” Webster says.

Plant-based alternatives to fish and poultry are also available or in the works.

“It will be interesting to see how long these last on the menu, whether consumers start questioning the true healthfulness or true sustainability of these products, and whether new iterations of traditional products that are a hybrid between whole food plant-based burgers and the ultra-processed current iterations strike a balance that’s more natural, healthier but still appealing to meat-eaters,” says Webster.