The development of food-safety interventions prior to slaughter and fabrication has seen a variety of alternatives, and a variety of results. 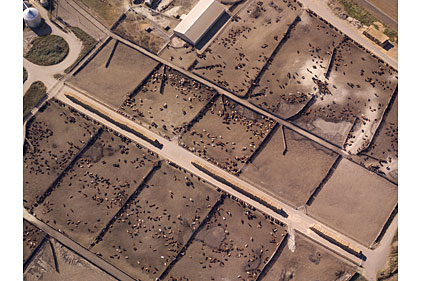 Cattle producers need a variety of tools in their pre-harvest toolbox to aid in food-safety interventions. Carcass wash, typically a reference to food-safety interventions that take place after the hide has been removed, has shown some recent improvements. The addition of bromine to carcass-wash systems is one.
“Bromine has shown very good efficacy in food-safety interventions for beef processing,” says Angie Siemens, vice president of technical services for Cargill, Wichita, Kan. Reduced water usage is another improvement. “Continued refinements of the carcass-wash systems have made them effective at lower water-usage rates,” she adds.
In regard to other pre-harvest food-safety interventions, the addition of probiotics in feed rations has helped with advancements.
“Probiotics have shown to be highly effective against bacteria that have the potential to cause foodborne illness,” Siemens says.
The use of the probiotic lactobacillus acidophilus as a direct-fed microbial, based on plant data, appears to work very well, agrees Keith Belk, a professor in the Department of Animal Sciences at Colorado State University in Fort Collins.
On the other hand, the benefit of vaccines, based on operations data, has been hit and miss.
“For some reason, there are populations of cattle in which they work really well, and then there are other populations of cattle in which they don’t work so well,” Belk says. “None of them have shown to be a silver bullet. Some of the best technologies that we’ve had available are still not ready for commercial use.”
The problem with vaccines is the difficulty and expense in showing efficacy, because of the luck of the draw of the prevalence of any particular pathogen in a herd of cattle. To show efficacy requires large, expensive studies, Belk says.
“There is potential for the vaccines to work, but they still have a ways to go,” he says.
Trained and skilled employees are the most important part of a food-safety program, including in the pre-harvest area. As for mechanical interventions, Siemens says that broadly applied interventions that are really working include hide-on-carcass washes, pre-evisceration washes followed by thermal or lactic treatment, carcass washes with bromine, and a thermal treatment (steam or hot water).
Additional and alternative mechanical interventions may be viable at a specific plant based on its geography, layout, or regulatory circumstances, Siemens adds.

Cargill continues to explore food-safety technology options under development that have promise for use as pre-harvest interventions to further enhance food-safety programs. But the industry continues to see delays in regulatory approval for pre-harvest technologies that could prove beneficial in reducing the risk of foodborne illness, Siemens says.
“We believe that with the efforts and research being placed on pre-harvest interventions there will be several breakthrough technologies that reduce the pathogen load on animals prior to slaughter,” Siemens says. “We encourage the expanded use of any science-based and proven technology that can provide significant improvement to public health by further reducing pathogens in beef.”
Belk agrees that unless companies are developing technologies on their own, not a lot of pre-harvest research funding is occurring with the exception of a few areas.
“There has been quite a lot of work pre-harvest-wise to address Salmonella, and more than anything that work has been conducted to characterize when, how, and how frequently cattle are contaminated with Salmonella,” Belk says.
Belk would like to see work on vaccines continue, because ultimately they have some merit, particularly if they can be made cost-effective.