For example, many companies are interested in vaccines for E. coli, says Jim Dickson, a professor in the Department of Animal Science at Iowa State University in Ames.

“There is some information that suggests the vaccines do work,” he says. “It’s not a cure all, because part of the issue with E. coli in cattle is the cow itself, but part of it is what’s coming in on the hide. The vaccines don’t do anything for that.”

Direct-fed microbials (DFMs) are continuing to evolve as pre-harvest food-safety interventions for both E. coli and Salmonella as well. The DFMs are cocktails of non-pathogenic fermented bacteria that are not designed to be pre-harvest interventions, but increase nutrient absorption in cattle feed, says Matthew Taylor, an associate professor of meat science at Texas A&M in College Station.

“While not designed for food safety, DFMs have a food-safety impact by decreasing the numbers of pathogenic E. coli and Salmonella shed by these animals in their feces,” he explains. “There is an opportunity that these types of products present to us in addition to the probiotic impact.”

In addition, pre-harvest interventions such as bacteriophages, viruses that attack specific bacteria, are beginning to make headway in the industry. Bacteriophages can be applied a few hours prior to harvest to reduce the presence of pathogens on the hide, says Sid Cunningham, director of food safety and quality assurance at Harris Ranch Beef Co., Selma, Calif.

Hot-water pasteurization is one of the main food-safety interventions used across the industry. Sanitary design and mechanical improvements have been made to hot-water pasteurization cabinets in recent years, Cunningham says. Additionally, pattern line focused interventions such as steam vacuums have progressed (items such as hock cleaners) and can now be applied to encompass a larger area of the carcass at one time. This improves the efficacy of the intervention, he adds.

Most of the major packers are doing both pre-evisceration washing after they have pulled the hides off the cattle or after scalding for pigs and post-evisceration before they go into coolers, Dickson says. As such, many carcasses are getting washed and sprayed twice with some type of antimicrobial on the slaughter floor, he says.

More companies also are looking at decontaminating the hide on the cattle after they have been stunned and bled out, so a carcass-wash step occurs before it ever comes out onto the kill floor where they start taking the hide off, Dickson says. In poultry processing, some equipment is now being adopted that applies antimicrobials after the water-cool step, which prevents antimicrobials being rinsed off, he adds.

The area that continues to advance the most is antimicrobial sprays or organic acids that can be applied to carcass or subprimal surface to aid the in the reduction of E. coli and Salmonella throughout both the harvest and fabrication process.

“These antimicrobials may be new blends of previously used antimicrobial or they may be emerging technologies that can be applied to the carcass’ surface using a novel approach,” Cunningham says.

Lauric arginate is one new antimicrobial being used, and cetylpyridinium chloride (CPC) is being used under certain conditions in the poultry industry, says Alejandro Castillo, an associate professor of meat science at Texas A&M University.

Castillo and Taylor are part of the STEC CAP grant to reduce the occurrence and public-health risks from eight targeted serogroups/serotypes of Shiga toxin-producing E. coli. They are studying intervention techniques to reduce STEC risks from cattle, hides and carcasses.

“A few years ago, everybody started to learn that the fact that you spray your carcass with an antimicrobial doesn’t mean that you are going reduce microorganisms,” he says. “There are a lot of factors, and one of the most important factors is how you make sure that … the antimicrobial [is] actually going to reach the microorganisms.”

In turn, some researchers are studying electrostatic spray to improve the coverage of carcass wash.

“People started to use electrostatic spray to reach those parts that are hard to reach by a regular spray, and they get it just by charging the solution electrically,” Castillo says. “So if there is any polarity, any electrical charge [in the surfaces that need to be washed], and the drops of the water of the solution are electrically charged, then they are going to be attracted. That way you can make sure … that when you have a crack or crevice or something like that, you still reach those hiding pockets and you have reached the bacteria.” 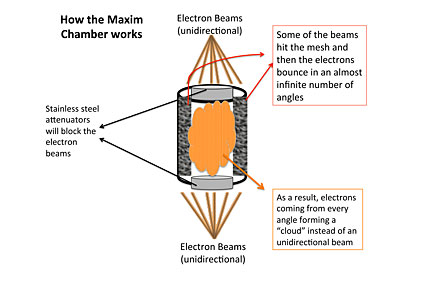 Castillo also points to carcass radiation as another invention being researched. Recently the American Meat Institute filed a petition to FSIS for approval of electron beam irradiation of carcasses. Electron beams have little penetration power, and it is possible to kill microorganisms and then later trim the radiated part that is mostly fat, Castillo says. FSIS denied the petition because electron beams are unidirectional, and with a carcass’s irregular surface, no way existed to control the dose, he says. Now, researchers have found a solution in Maxim’s Electron Scatter Chamber, which includes placing a stainless-steel mesh surrounding a cylindrical area where the carcass is placed.

“Essentially our prototype is a chamber where you apply the electron beams onto some parts of stainless-steel mesh,” Castillo explains. “When they bounce in the stainless-steel mesh, they are hitting the carcass from multi-directions, not unidirectional. That way we were able to have uniform distribution of the radiation dose over the carcass. We believe this would be the solution.”

Pre-harvest interventions are going through a consistent period of evolution, so there is a lot more to come from this area in the near and distant future.

Castillo also has hopes for a more automated system, so when a facility receives a carcass, processors would not have to stop except for the final FSIS inspection. He also anticipates improved antimicrobial treatments, whether it’s the application to increase the reach of the spray or antimicrobials that are modified to kill more microorganisms and have a broader spectrum.

“We’re getting closer to finding an effective way of applying sprays or washes to reach all bacteria,” Castillo says.

During the past 20 years, the industry has made major improvements in pre-harvest interventions.  The challenge now is all the “easy” stuff has been done, Dickson says.

“If you look at carcass contamination across any species, contamination rates have come down dramatically, so the challenge is now we are going to see less return for our investment,” he says. “It’s going to be more incremental improvements.”

Harris Ranch Beef Co.’s process of receiving clean cattle starts at its sister feedlot, Harris Feeding, with good pen maintenance and design that prevents cattle from becoming heavily soiled. Additionally, all cattle trailers are washed in its truck wash prior to being loaded, subsequently reducing build-up of organic material inside the trailer and preventing cross contamination between loads of cattle.

Once the cattle arrive at Harris Ranch, they are unloaded into clean pens and transferred through wash pens to remove organic material from the animals’ hides prior to being harvested.

In turn, the sanitary dressing procedures and interventions are monitored continuously by Harris Ranch’s quality assurance department and microbiological data is collected and trended from various points throughout the harvest process as an additional measure in process control.

“I believe using a synergistic approach such as the long-standing, multi-hurdle approach of incorporating multiple interventions throughout the harvest process really works,” Cunningham says. “This includes incorporating pre-harvest interventions such as DFMs or antimicrobial vaccines as a part of the overall microbial mitigation strategy for a facility.”

Communicating Science and Engaging the Public at the 2016 RMC