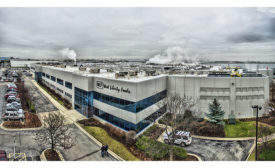 West Liberty Foods won the meat-processing lottery in 2014, when it purchased the former Quantum Foods facility in Bolingbrook, Ill. — a jackpot that already has paid dividends and has an aggressive growth plan in place.
Andy Hanacek
No Comments

In January 2016, a jackpot of historic proportions grabbed the attention of the nation — those who purchased Powerball tickets hoped the record $1.58 billion prize would land in their laps and change their fortunes.

Industry News
No Comments
West Liberty Foods expects to start up meat processing operations at the Bolingbrook location within the next 30 days.
Read More

No Comments
Brown is a veteran of the food and meat industry, and he brings more than 25 years of experience to Quantum Foods.
Read More