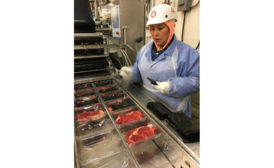 Industry News
No Comments
Chicago Meat Authority has increased its organics offerings to include steak and beef.
Read More

Sam Gazdziak
No Comments
Over the course of 20 years, nearly everything produced by Chicago Meat Authority has come from its location on 47th Place on the South Side of Chicago. The building has grown considerably over the years - seven expansions, including acquisition of adjacent land and building over alleys.
Read More

JBS U.S.A. to implement Völur's AI solution to maximize carcass value and ensure optimal use of each animal