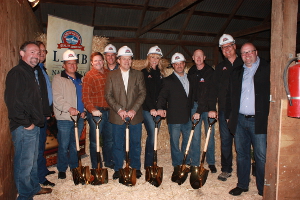 On a much-needed rainy April day, and under the cover of Dutton’s grey barn, Superior Farms, the nation’s largest lamb producer, today unveiled the renderings for its new Dixon processing facility.  To celebrate the occasion, the company hosted a groundbreaking, “Dixon-style,” complete with lamb lollipops, a barbeque truck, and with the support and representation of local and state agencies, 4th- and 5th-generation family ranchers, and nearly 100 of the company’s own employees.

The new lamb processing plant, designed with an eye towards green technologies, will reduce the company’s total carbon footprint. It will be built adjacent to the current plant, which will remain operational until the new construction is complete, preventing processing downtime. Designed for the needs of the industry today, Superior Farms’ new facility will leverage the best in ergonomics, natural lighting, wind power, water reduction (estimate is 30 percent), while reducing the company’s total energy consumption by 45 percent.

"We are "right-sizing" this facility," said VP of Operations Shane MacKenzie.  "Meaning, we're building the plant to be more efficient and appropriate for the number of livestock coming through today.  And we've used some of the best experts in the field to help design something that makes sense - our own employee owners who work the line every day and know it better than anyone."

Founded in 1964 in Ellensburg, Washington, Superior Farms opened its California processing facility in 1981.  The California facility, located in Dixon, was originally built in 1923 and has served as both a beef and lamb packing plant over the 90+ years it’s been standing. The new plant represents a substantial investment, on many levels, for Superior Farms.  “We believe in the US lamb industry, said Rick Stott, Chief Executive Officer of Superior Farms.  “We want to give producers the confidence that they will have a market for their lambs for a long time to come.  As stewards of all things lamb, we are investing not only in this plant, but also in the producers. Together we will thrive.”

Designed by the company’s operations team, the new facility will be approximately 50,000-square-feet in size and will feature several processing rooms, refrigerated coolers and freezer space, employee welfare areas, training rooms, warehouse and distribution docks, livestock yards and office space.  It will have new state of the art packaging equipment that’s energy efficient and ergonomically sound.  For the build-out, the company plans to incorporate environmentally conscious and sustainable elements, while taking advantage of new technologies that offer safer and healthier ways to operate.

Superior Farms has already received preliminary building design plans from Claussen Engineering of Emeryville, and all necessary permits have been filed with state, county and local agencies.  The Company is in the process of finalizing general and sub-contractor bids.

Numerous dignitaries came to show their support for the project, including:

In addition to its brick and mortar investment, Superior Farms demonstrates its dedication to the future of the lamb industry via its commitment to small farmers, local restaurants, farmers’ market-sellers, and the thousands of lambs the company processes and returns each year for 4H and FFA (Future Famers of America) kids and teens. The company separates and handles each lamb and returns the product, which is then sold to offset the cost of college tuition.