The keeper of Wahoo wiener

Not even a fire could stop Wahoo Locker's incredible growth.

Regional sausage favorites can be found all over the United States. Wisconsin has bratwursts, and Louisiana has the Andouille. In central Nebraska, it was the Wahoo Wiener. Produced out of the OK Meat Market in the town of Wahoo, the Wahoo Wiener had a 50-plus year run as one of the area’s favorite sausages. Unfortunately for the residents of Wahoo and the surrounding area, the Wahoo Wiener ceased production when the OK Meat Market was sold in the early 1980s, and the new owners didn’t buy the cherished recipe.

The Wiener’s improbably comeback started when a new owner acquired Wahoo Locker, a small plant with great location. Charlie Emswiler grew up in Iowa and, at an early age, started helping some friends run a custom poultry plant. He later moved to Brainard, Neb. to operate a small locker plant. He gained a red meat education from the former owners and operated that location for several years, when he was approached with an offer to buy the Wahoo Locker plant.

Wahoo Locker was, at the time, primarily a cold storage facility with very little space for retail. It was just 20 miles away from Brainard, but it was located closer to a main highway between Omaha and Lincoln, Nebraska’s biggest cities.

“I could see the future, that if I was going to grow I would have to be closer to the big city,” says Emswiler, who bought Wahoo Locker and ran both facilities for a time before selling the Brainard facility.

The difference between what Wahoo Locker was back then and what it is today is astonishing. The building had gone through several uses, including a feed store and an ice company, before being turned into a meat locker. The whole plant was cold storage with locker boxes for people who didn’t have freezers. The limited processing area was a later addition.

The old plant’s retail space was about 12 feet by 18 feet with barely any room for a cooler. The quality of the meat products was high, but the overall size and appearance didn’t create the welcoming atmosphere that Emswiler wanted.

“Anything we sold [for retail] we had to go to the big freezer in back and get it out of a box,” Emswiler says. He eventually brought in a small cooler to hold product, but when customers lined up on the weekends, it was almost impossible to keep the cooler full or organized.

The new facility, opened in 2013 after a fire destroyed the old plant, features eye-catching signage outside and a large retail store, with 40 feet of cases featuring Wahoo Locker’s award-winning cured meats, a fresh meat case, homemade breads and aisles of interesting kitchen accessories. When the store gets busy on the weekends or when a tour bus drops off a load of shoppers, two employees can man the check-out counter to avoid any long waits.

“What really started the growth was Clarence Beranek, back in 1999, gave me the recipe for the Wahoo Weiner, which was really what Wahoo was known for,” Emswiler explains.

Clarence was one of three brothers who ran the OK Meat Market. He came into Wahoo Locker one day when he was about 80 years old and asked if he could make a small batch of Wahoo Wieners. After a successful 25-pound test batch, he offered to teach Emswiler the recipe. At the time, Wahoo Locker only offered a handful of further processed items, but adding the Wahoo Wiener to its portfolio helped launch the company in a new direction — and inspired Emswiler’s skill at new product development.

Wahoo Locker now sells multiple varieties of the Wahoo Wiener now. Along with the original recipe, there are versions with cheddar and pepperjack cheese, a Hawaiian Wahoo Wiener, a chili cheese Wiener, and a skinless red dog that looks more like a conventional hot dog.

“When I first started adding other ingredients, it was strictly by trial and error,” Emswiler says. “As they would sell, it gave me more motivation to try.”

That motivation has resulted in numerous state and national awards in cured meats competitions. At this year’s American Cured Meats Championships, Wahoo Locker was the grand champion in the Restructured Jerky category and a reserve champion in the Flavored Snack Sticks and Smoked Turkey categories.

Burned down, then built up

By 2013, Wahoo Locker had outgrown its building. Along with a retail area that could not keep pace with the customer traffic flow and present the kind of image that Emswiler wanted, the production area was far too small. Some production was being done on refrigerated trucks, and there wasn’t enough room to work during deer season.

Eventually, Emswiler bought the building next door to Wahoo Locker. A former hardware store and lumber yard, it featured a wide open space, even if it wasn’t ready for a meat processing plant.

Three days after Emswiler and his employees started fixing up the building, a grease fire broke out in one of Wahoo Locker’s smokers. The employees tried to fight the fire with extinguishers but were forced to evacuate. The building and all its contents was a total loss, though fortunately nobody was injured. The fire made renovating the new building even more of a priority.

“We were down 5 months before we opened back up again,” Emswiler says of the new location. “It was a blessing that we had this place, or else the turnaround time would have been way longer.”

With a 17,000-square-foot building, Emswiler was able to design the facility that he had always wanted. The retail area was given special attention. The company’s products now are neatly organized in a cooler that runs the length of the store. Unlike some meat markets, Wahoo Locker doesn’t feature any produce or other outside food items, aside from some salads in the fresh case. It does feature rows of cooking accessories that complement Wahoo Locker’s products.

“When the guys come for deer season, they purposely bring their wives so they can shop and enjoy it,” he explains. “I wanted a shop that the ladies love, and in return, they love for their husbands to come here.”

The new plant added some new features to the company’s operations. The addition of a kitchen lets Wahoo Locker produce fresh-baked breads, sausage buns and pizzas. The kitchen also is used for the company’s catering business. A typical catering job for Wahoo Locker is for 200 to 400 guests, though the company did once cater three events in one day for a total of 1,700 guests.

Wahoo Locker was able to grow its workforce with the larger building. The company now has 10 full-time and 18 part-time employees, compared to three and four, respectively. The processing area, which barely had room for three meat cutters, can now utilize six. A rail system in the building makes moving carcasses easier than ever. From the slaughter floor, carcasses can move by rail to the cooler and then to the production floor, eliminating any unnecessary lifting.

The rails are designed to provide extra cooler space during deer season. Typically, beef carcasses hang on every other rail. Deer carcasses can hang on every rail, effectively doubling the capacity. That extra capacity is important, because Wahoo Locker has grown its deer processing since Emswiler re-introduced it shortly after buying the company.

Wahoo Locker makes about 30 different items from deer, but the one that’s far and away the most popular is the pepperjack snack stick. Emswiler says that about 40 percent of the deer meat processed last year went into those sticks. His customers act as his marketing department, which has helped grow that business.

“It’s like bragging rights for the deer hunters,” he says. “They all go to the break room where they work. They bring in sticks or jerky and say, ‘Oh, this is the best jerky you’ll ever eat.’”

Some small plants have gone away from slaughter as their businesses evolved, but Wahoo Locker still slaughters animals on the average of once or twice a week. Emswiler has also added poultry slaughter to the company’s services. A typical day could have employees slaughtering and processing 30 to 50 hogs, 10 to 20 cattle, 400 to 600 chickens, and even a sheep or two. While he’s not looking to grow the company’s slaughter business, it does fill an area need, and the company is booked several weeks in advance.

“In early spring and early summer, we used to slow down,” he says of the company’s slaughter operations. “This spring, we slowed down some, but not nearly like normal. We may get to where the slaughter doesn’t ever slow down.”

One of the biggest decisions made along the way was the choice to become federally inspected. The new facility was designed with the intent to go federal at some point, down to the addition of an inspector’s office.

“It just kind of evolved, and we made the decision to just do it,” Emswiler says. “It’s a lot of paperwork and sometimes a lot of hassle, but I think in the big picture it’s the best thing I did.”

The federal inspection has opened up a multitude of private label customers for Wahoo Locker. Some customers will bring in a dozen or more cattle for the company to process into beef cuts that can be sold at local farmer’s markets. Other agreements involve producing large batches of private-label beef jerky or other products on a regular basis. One of the biggest advantages that Wahoo Locker has is that there are no nearby federally inspected plants.

“The closest federal plant from me would be two and a half hours away,” Emswiler explains, adding that he has yet to advertise or market the fact that Wahoo Locker is federally inspected. Given the volume of private-label work that has come his way, there simply hasn’t been a need.

Wahoo Locker’s evolution may have been forced a bit due to the fire, but the company’s growth and success stem from paying attention to the customer. Emswiler saw that a small, old-fashioned locker plant wasn’t appealing to some of his walk-in customers, so he created an inviting space. He saw the growth in farmer’s markets and the “think local” movement and became federally inspected to gather in that private-label business. He points out that the quality of small processors is continually increasing, so he’s worked to become an award-winning processor himself.

For those customers who still want a traditional favorite, there are plenty of packages of Wahoo Wieners available, in plenty of varieties. 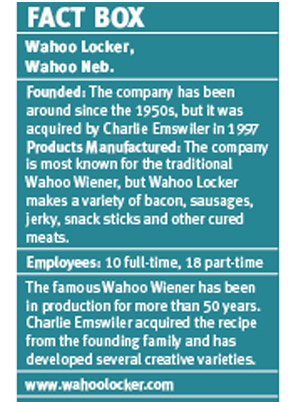