The next generations are hard at work to continue the success Ralph's Packing has enjoyed for 60 years.

When Gary Crane was about 10 years old, his father purchased a meat plant in Perkins, Okla., located between Oklahoma City and Tulsa. He would grow up in the business and go on to be its second-generation owner-operator. Now, 60 years later, with two more generations involved in the business, he is starting to take a well-earned step back or two.

“I’m 70; I’m wore out!” he exclaims, even though he still has his tasks at Ralph’s Packing Co. Ralph’s has, under his and wife Tess’ guidance, evolved from a slaughter and meat-cutting operation to one of the country’s most awarded small meat processors. With daughter Erica Hering and son-in-law Jason guiding the business forward and their teenaged sons already learning the ropes, Ralph’s is well-positioned to grow its business further than ever.

A decade ago, when the company celebrated its 50th anniversary, it completely renovated its retail space, creating an inviting environment with plenty of coolers and display cases to sell its fresh meats and fully-cooked products. Earlier this year, the company celebrated its 60th anniversary by becoming federally inspected. The permanent grant came on April 4, Erica says.

“Our core customer base is in our area, but we’ve had stores call us outside of the state who wanted to carry our products, and we had to tell them no. Then we’ve had a couple of larger customers coming on that are out of state, so we knew it was time to go federal, so that we could ship out of state,” she explains.

Aside from some renovations to the receiving dock, the transition from state inspection to federal inspection was relatively painless. Erica says that Oklahoma’s state inspection program is a strong one that had Ralph’s well-prepared to go federal. In addition, third-party audits that are required by customers like Walmart are sometimes more thorough than the Food Safety and Inspection Service.

The goal of federal inspection, Jason says, is to find a distributor that wants the company’s beef jerky and snack sticks to ship outside of the state.

“I feel like pretty soon, the jerky production will be ramped up,” he says, acknowledging that the increase in production might change the company’s production focus.

The evolution of Ralph’s Packing

When Ralph Crane bought the business in 1959 and renamed it Ralph’s Packing, the business was primarily custom processing of beef and pork, along with a few wholesale accounts. The products that Ralph’s is known for now, like its Circle R Brand jerky, snack sticks and sausages and its “No Junk Yard Dogs” wieners, would come along later, when Gary began adding more processed items to the operations.

The company’s first smokehouse was a homemade affair that would have made MacGyver proud.

“Dad’s first smokehouse was an old milk cooler that had a wood stove on the side of it and a gas burner at the bottom of that milk cooler,” Gary recalls. “He’d build a fire in that wood stove, and he’d hang hams and bacon in there. He had a hair dryer on the wood stove to keep the fire going, so he could smoke meat. There weren’t wet bulb/dry bulb [smokehouses] back then!”

Ralph Crane later built a brick gravity house to smoke hams and bacon, but it was not able to make products like beef jerky. Gary Crane bought a used modern smokehouse around 1986, and the company has grown its cooked products portfolio ever since. It now has three three-truck smokehouses as well as some smaller units.

Sales of sausages, meat snacks and other fully cooked products proved to be so popular, that sales eclipsed the company’s custom processing. Eventually the decision was made to get out of slaughtering livestock altogether.

“Me and Tess had talked about it for quite some time, but it was 10 years ago that I told the kids that I thought we ought to stop slaughtering. They looked at me like I was crazy,” he remembers.

“I just didn’t know what we were going to do with all the employees,” Jason says. But, he adds, “it’s amazing how everything took off. We didn’t lose any employees. We went from killing to making a lot more jerky and sausage right off the bat and never missed a beat. I didn’t know that we could transition so easy. I thought, ‘Why didn’t we quit a couple years earlier?’”

Stopping an almost 50-year service created some strong emotion among its customers. Jason says that they had to put a lock on the livestock gate so that people wouldn’t try to sneak their animals inside.

“We sent out a couple of letters trying to inform everybody, because we’ve been doing this for years and years,” Tess says. “A couple of people called to cuss us out, and a lot were crying.”

The decision to cut out the slaughter side of the business was not due to a lack of demand. There was, and is, still a need in the area for livestock slaughtering, but federal regulations have made it difficult for small plants to kill the volume needed to be financially successful. Ralph’s was killing 80 or 90 hogs and 70 or 80 cows in a week. Now, because of the paperwork required for each animal, efficiency has decreased. To complicate matters, there is a lack of skilled, available butchers to provide quality work.

Today, the Ralph’s Packing facility is about 35,000 square feet in size, with 1,600 square feet serving as its retail store. The company’s former retail space has been converted to a jerky packaging area. The walls of the market feature a picture of Ralph Crane, naturally, as well as a slew of awards from state, national and international competition. A regular award-winner at the American Cured Meat Championships, Ralph’s has also been very successful at the IFFA Quality Competition for Ham and Sausage, held every three years in Frankfurt, Germany. Three years ago, Ralph’s won 10 awards. This year, it won 21 awards, including 16 gold medals. In addition, both Gary Crane and Jason Hering have been inducted into the Cured Meats Hall of Fame, an honor presented at the American Association of Meat Processors annual convention.

Carrying on the tradition

Jason attended junior college in Texas and was introduced to the meat processing trade there. He spent three years in plant management for a sausage company in south Texas before meeting Erica — at an AAMP convention, fittingly.

“Erica said, ‘We can either move to Texas or move to Oklahoma,’ and I said, ‘I’ve never been to Oklahoma!’ So we got married and moved to Perkins, and I’ve been here for 22 years,” he says.

During that time, learning from his father-in-law, Jason has expanded Ralph’s product lines with popular new items. He introduced a fully cooked pulled pork product, and when that proved successful, he expanded the line to brisket as well. 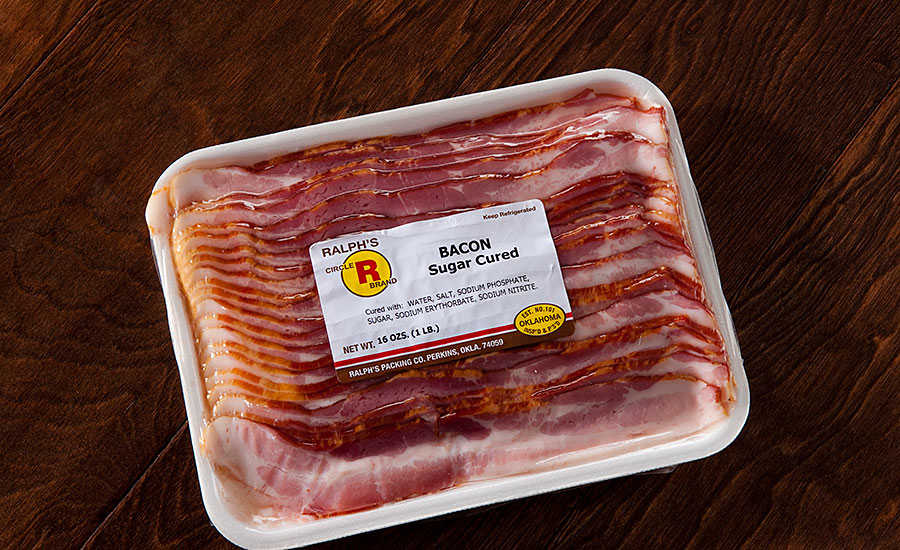 Ralph’s Circle R Brand line of products can be found in the retail store in Perkins, and its products have expanded throughout the state through wholesale accounts.

OSU’s main campus is located in Stillwater, which is about 10 miles from Perkins. The Crane family has been a partner with the school from an academic standpoint for years, assisting and advising its meat science department. From a customer standpoint, the school used to buy sausage patties from Ralph’s years ago and approached Ralph’s again when a new executive chef was hired.

“He wanted me to go up there, talk to him and look at some menus,” Jason explains. “I figured some of it was just a little too fancy for college kids, but he made it work. We make a lot of hamburger patties and other items, some that you can’t find anywhere else.”

“Everybody wants to know where their food comes from, even those college kids. I think they think it’s cool that it’s made just down the road and not in a big warehouse,” Erica adds.

Along with working at Ralph’s, Erica has also represented small processors nationwide. She became the first female president of AAMP, serving her one-year term in 2016-2017.

“I think AAMP is a very unique organization, and I had a blast. It was a lot of work, but I would do it again,” she says. The Herings attended several state association shows, meeting old friends who are regular AAMP convention attendees as well as companies who don’t regularly attend the national show.
Ralph’s is lucky enough to have capable employees who are able to keep operations running smoothly when any or all of the four principals are on vacation or attending industry events. Ralph’s employs a total of 39 people, including Josh and Logan Hering, the twin sons of Jason and Erica. The boys, who are preparing to enter high school, are active in the Future Farmers of America and the 4-H Club. They help in the plant where they are able, in between homework and extracurricular activities.

As far as finding other employees, Gary notes that the job market is tough in Oklahoma.

“Agriculture is big, but oil production is high dollar, and they can pay a lot better wages than what we can,” he says. “Of course, their working conditions are a lot different, but for your average Joe who looks at dollars per hour, it’s hard to pass up that oil field.”

Ralph’s has taken to finding new employees through temporary employment services and no longer hires people directly. If the temporary worker doesn’t work out, the employment service is responsible for letting them know. If the worker is a keeper, they are hired as a full-time employee.

“We work them for a minimum of 500 hours, and we know from that if they’re going to be a good employee or not,” Erica says. “You know what their work ethic is after 500 hours, if they’re someone who’s habitually late or doesn’t show up all the time.”

As Ralph’s Packing positions itself for future success, Gary Crane says that the environment for small processors is still strong, provided they are willing to put in the work of creating quality products.

He points to the company’s perennially popular No Junk Yard Dogs, so named because they are high-quality hot dogs with no “junk” in the ingredients.

“I don’t think there’s any use of us even fooling with making a cheap wiener. The big guys can make them so much cheaper than we can that there’s no use in trying to compete with them,” he says. “We make a quality wiener. We don’t set the world on fire, but every wiener we sell, we make money on it.”

COVID-19 vaccines should be given to ALL meat industry employees

Remember the lessons of 2020

Check out the December 2020 edition of The National Provisioner, featuring the 2021 economic outlook report, regulatory implications in the poultry industry associated with a presidential administration change, understanding metmyoglobin and meat discoloration, process control software and much more!