The Dayton family has served its Iowa community with quality meats and service for 60 years.

When you visit Dayton Meat Products in Malcolm, Iowa, there stands a very good chance that a member of the Dayton family made your sausage, packaged your bacon, checked you out and even talked to you about buying a grill. They probably butchered the livestock you brought and catered your big dinner. They even packed the well-received gift boxes that you handed out to employees and customers at the holidays. It’s a lot of work for one family, but the Daytons have been keeping Iowans’ kitchens well-stocked for 60 years.

Lawrence Dayton bought the town’s locker plant in 1959 and renamed it Dayton Meat Products. He operated it for 40 years before selling it to two of his sons and his son-in-law. The three partners and their families have kept the business prospering since 1999. The scope of Dayton Meat Products has continued to expand under three generations of family operation.

“Back in the ‘80s, during the farm crisis, we thought it was time to branch out and find other things to keep busy with,” explains Bill Dayton, one of the three partners who own the business. “We started making hams and bacons and different jerkies. Then we started making sandwiches and pies, started doing a little catering. Thankfully I’m retired from the catering end of it! My daughter is in charge of that.”

Custom slaughtering is still an important part of the business, Dayton says. Producers from 50 miles around Malcolm bring their cattle and hogs to Dayton Meat Products. In an average week, the company processes about 15 head of beef and 10 to 15 hogs.

“It’s amazing how far in advance we’re booked. I have room next year between the end of March and the end of May for custom slaughter. Otherwise, we’re booked solid the whole rest of the year,” he adds.

The three partners who operate the business include Bill Dayton, his brother Dave and brother-in-law Mark Lang. Dave does the livestock slaughter, and Mark handles the books and the front end of the business. Bill says he takes care of the back end of the company.

“But I’m more of a gopher — go for this, go for that, help out when needed,” he cracks.

In addition, Bill’s three children work in the business. Josh is the head meat cutter, Jake works in the sausage kitchen, and Barb runs the catering business and helps with packaging. His wife, Anna, helps pack as well. Molly, Dave’s daughter, takes care of the processing room, and Patty Lang, Mark’s wife, works up front in the retail store. 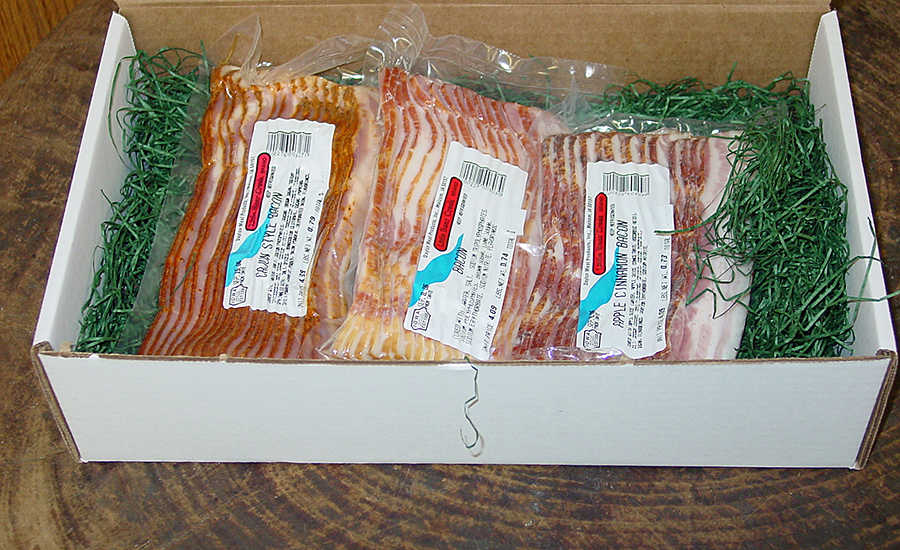 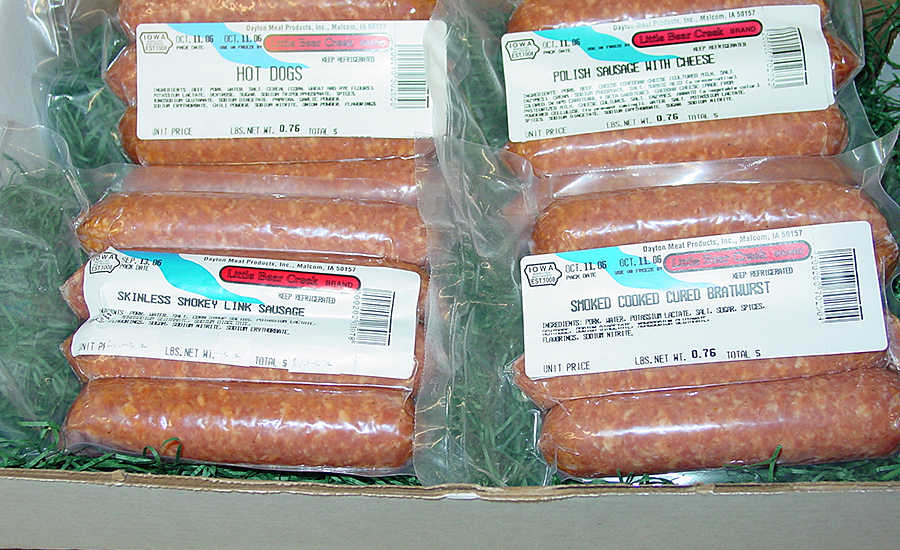 Dayton Meat Products produced more than 400 gift boxes last year and expects at least that many this holiday season. The boxes can contain anything from a smoked turkey to a selection of the company’s sausages or bacon.

The company has about 12 employees, and all but four of them are part of the family. The non-family employees have been with the company for some time.

Dayton Meat Products has become an award-winning processor of cured meat products. Larry Dayton, when he started selling further-processed items, sent his hams and bacon to a processor in Marengo, Iowa. When that processor went out of business, he bought the company’s first smokehouse and learned how to use it through trial and error. Bill, who joined his father’s business full-time in 1976, has carried that tradition very well. He was inducted into the American Association of Meat Processors Cured Meats Hall of Fame in 2015.

One of the company’s specialties is its breakfast sausage, and it also produces several hundred pounds of sweet bologna per week — a rarity in the Midwest.

“I started making that after they had the AAMP (American Association of Meat Processors) convention in Lancaster,” Dayton explains. Sweet bologna was the regional specialty class in the American Cured Meat Championships that year.

He entered his first cured meats competition in 1978 and won his first award — for ring bologna — the following year. Since then, the company has won more state, national and international awards than it can hang on the walls of its market.

“Our association has some pretty good products,” Dayton says of his fellow Iowa processors. “It’s getting harder and harder to win there.”

Shoppers who come looking for bacon, snack sticks, sausages or jerky have a variety of flavor options. In bacon alone, the company sells a regular, Cajun, apple cinnamon and a dry-cured bacon. Dayton says he is experimenting on a ranch-flavored bacon currently. The company’s product development process is simple but effective.

“It probably takes four to five batches before we get it figured out,” Dayton explains. “Usually whenever I made something new, I’d take it home for the family to try. They were probably better judges than anybody else if it was any good or not. They can be more honest than other people.”

The retail portion of the business grew so much that Dayton Meat Products built its facility in 1994, adding a market area to what was previously just a slaughterhouse. The building is 6,000 square feet in size and consolidated the business into one building. Previously, the slaughtered carcasses had to be taken to a different building uptown.

Dayton Meat Products processes animals year-round, except for the month of December. That month, the employees are busy with two seasonal activities: deer season and gift boxes.

The gift box program started off with one customer, and it’s grown ever since. Dayton says the growth has been largely by word of mouth, as the company hasn’t promoted the service much. Last year, he estimated that the employees assembled between 400 and 500 boxes last December. They can hold anything from a turkey breast or smoked chicken to summer sausages, sweet bologna, snack sticks and cheese.

While not seasonal, the catering business also has expanded by word of mouth. Catering jobs don’t happen every weekend, but there are enough that Dayton says he was glad to give that portion of the business to his daughter and free up his nights and weekends.

Dayton Meat Products has taken advantage of many opportunities that have come its way, and it is posed to have more chances. While currently state inspected, the company has had interest from distributors who wish to take some of its products outside of Iowa. Dayton said he might let the next generation of ownership decide the next steps for the company. However, retirement doesn’t come without a hitch.

“We bought the local convenience store across the way, with the gas station,” he explains. “We had to buy it so we could have gas in town; we went two years without any gas stations. The rule is, the first one who retires has to take the gas station.”

Bringing together the Jensen Meat family