Garden City Community College is the longest continuously operating community college in Kansas and has had an animal science program for over 80 years. The program transitioned in 2000 from more of a basic animal science program to having emphasis on food science and safety as well as meat processing. GCCC’s former students can be found in multiple places in the agricultural industry, from farming and ranching to teaching in the classroom to animal health sales.

Although a large percentage of GCCC graduates will continue their education at a university, there are many students who come to this program for a non-transfer degree or a certificate program. GCCC offers certificates in Ag Business, Animal Science and Food Safety, including training in ServSafe® and HACCP for food industry partners. Additionally, with a mobile classroom, the program can take our training courses anywhere. The GCCC Mobile Lab is a large trailer that has slide-outs to make a 1,000 square foot mobile classroom. The trailer has its own satellite with wireless access for the 30 laptop computers inside and also has heating, air conditioning and a small kitchen. Training, such as Beef Quality Assurance, has been completed utilizing the mobile lab at feedyards and ranches across Kansas, Oklahoma and Texas. 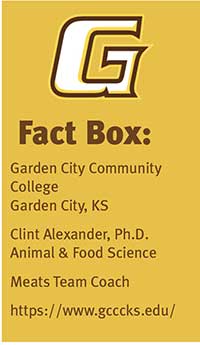 The meat judging team was started in 1987 as the college transitioned from Livestock to Meat Judging. The program won 2003 and 2015 National Champions as well as Reserve National Champions in 2001, 2004, 2005, 2009 and 2011. Additionally, members of the GCCC Team that were All-Americans were invited to participate in the 2014 Australian Intercollegiate Meat Judging Contest and came back to the U.S. with the Championship. The 2016 Meats Team was invited to this event in Australia in the summer of 2016 and was the first community college to be invited. The program has a very strong relationship with Tyson Fresh Meats in Finney County as well as Ehresman Packing Company in Garden City.

In October of 2012, the department was notified that it had received a $1.716 million grant from the Department of Labor. The TRAC-7 grant focused on industry training. The signature program for the college’s portion of the grant brought the food science and safety option. With this funding, GCCC renovated and built a food and meat science lab where students and industry partners could acquire training on all areas of food and meat processing. The facility opened in August of 2013. After product is used for teaching and judging, it is fabricated, packaged and marketed through Buster Red Meats to direct funding back into the program for judging and teaching.

GCCC has been in the business of carcass data collection since the meat judging program began in 1987. The service offers normal carcass data collection for feed-yards and their customers or beef producers to ascertain quality and yield grades for cattle as well as liver scoring collection. GCCC also does carcass show judging for many county fairs in Kansas, Oklahoma and Colorado.

Garden City Community College is a member of the American Meat Science Association. For more information about GCCC and its faculty, please visit the AMSA website at http://www.meatscience.org/students/graduate-programs.