New technologies are improving animal welfare and employee training at the point of slaughter.

A few years ago, Jessica Roosa, owner of This Old Farm, based in Colfax, Ind., was trying to solve employee turnover issues on the slaughter floor and began investigating solutions for her small, aged facility that is a custom service processor of beef, pork, lamb and poultry. What she discovered was changes that helped staff also helped her animals.

“Humane handling starts at the farm and is a given, not just a USDA regulation,” says Roosa. “I wanted to make life easier for our employees. But by redesigning our pens, for example, we reduced stress for both staff and animals.”

“If operators and the animals are in a low-stress environment, it leads to a better quality product,” Roosa says. In addition, the company’s beef boxes were retrofitted to be hydraulically controlled, which took 18 months from design to completion.

“Our holding pens were blocky, and it was hard for employees to move cattle out without touching them,” she says. “We made these changes to the beef boxes to also be able to hire more staff and rotate them between jobs.”

As it turned out, new employees weren’t needed because the stunner was so comfortable with the changes made, Roosa says. Next, a consultant worked with the farm on reducing stress for its pigs and installed electrical stunning.

“We realized electrical stunning was actually a step back for us,” Roosa says. Instead, employees worked on alleyways and restraints before re-addressing the farm’s actual stunning practices, she says.

“We train our employees to stun with 100 percent accuracy,” she says. “Platform layouts are an area we also improved to add better secure footing, safety and improved rail heights.”

Moving away from electrical stunning

Also, CO2 stunning is automated, so employees are not exposed to risks, he says. Niman Ranch has spent time and money the last few years to make its stunning systems more animal friendly.

“The pig flow and gate system is quiet on the live side,” Malenke says. “We’ve put a lot of effort on fine tuning the animal flow to the system and making it as comfortable and calm as it can be for them.”

Niman Ranch has invested in its employees by training livestock handlers to keep animals calm in a production setting. Malenke says the training doesn’t sacrifice the bottom line, and most of the changes made have been beneficial, rather than a cost burden. Pre-stun handling and training is another important new source of innovation, explains Andrew Gunther, executive director at A Greener World, in Bend, Oregon, a nonprofit certification and training organization.

“There is a direct correlation between how animals are handled and their product quality, such as redness or clots in the meat,” says Gunther. “Our aim is to make good farmers and add value without adding cost.”

“Small to medium plants have potential to be leaders and respond to consumer needs, because they move animals more slowly and have more care and oversight,” Gunther says. “When 600 to 700 cattle are slaughtered an hour, it’s difficult not to become immune. Staff learn and understand more about animal welfare issues when they are moving two to three animals an hour — and tend to address them.”

Chicken processors are also embracing CO2 stunning due to its perceived benefits to animal welfare, says Dianna Bourassa, Ph.D., assistant professor and Extension specialist in poultry processing at Auburn University, in Auburn, Ala. These systems vary, but generally the chambers gradually add CO2 in steps. Some also provide oxygen to decrease chickens’ convulsions.

“Auburn is currently conducting research on controlled-atmosphere stunning,” Bourassa says. Low-atmosphere pressure stunning is also gaining ground at poultry plants. Crates holding chickens are placed in a chamber and air pressure is slowly decreased, like flying in a jet, but by using controlled slow decompression with a vacuum pump.

“The technology has been around a while,” Bourassa says. “Some say controlled-atmosphere is better for animal welfare than electrical stunning and others disagree. It does require a big financial investment.”

Non-recoverable stunning is another area being explored by researchers, but it remains mainly experimental in the United States. Traditionally, chickens have been electrically stunned in water baths with low-voltage/high-frequency DC or AC water bath stunners before being bled out. Sometimes these broilers can wake up before the bleeding process is finished, which is distressing. A higher voltage can stun birds to death — “non-recoverable stunning” — before bleeding begins.

“We looked at what happens if broilers are stunned so they don’t recover,” Bourassa says. “It didn’t cause any problems and there was only minimal quality issues.”

What if birds were stunned and slaughtered on the farm instead of being transported first? This groundbreaking idea is being explored by a collaborative group from the U.S. Department of Agriculture’s Agricultural Research Service (USDA-ARS), University of Georgia, Georgia Tech and Auburn University.

“Today, it’s really an out-of-the-box idea to stun and bleed the birds on the farm first,” Bourassa says. “Then we’re not transporting live animals, which is always an animal welfare concern.”

No transportation, no stress. Processors don’t have to worry about outside temperature control, animals falling out of the trucks and stressed birds waiting before being moved from the truck to the facility.

Researchers can look to the past for insights as this was standard practice 80 years ago. It fell out of favor due to food safety concerns.

So far, preliminary research focuses on how to engineer the best path from farm to plant, the microbiology of chilling the carcasses quickly and how to best remove feathers.

“A lot of work needs to be done to see if it’s reasonable to completely change how birds are slaughtered,” Bourassa says. NP

The nuts and bolts of worker safety 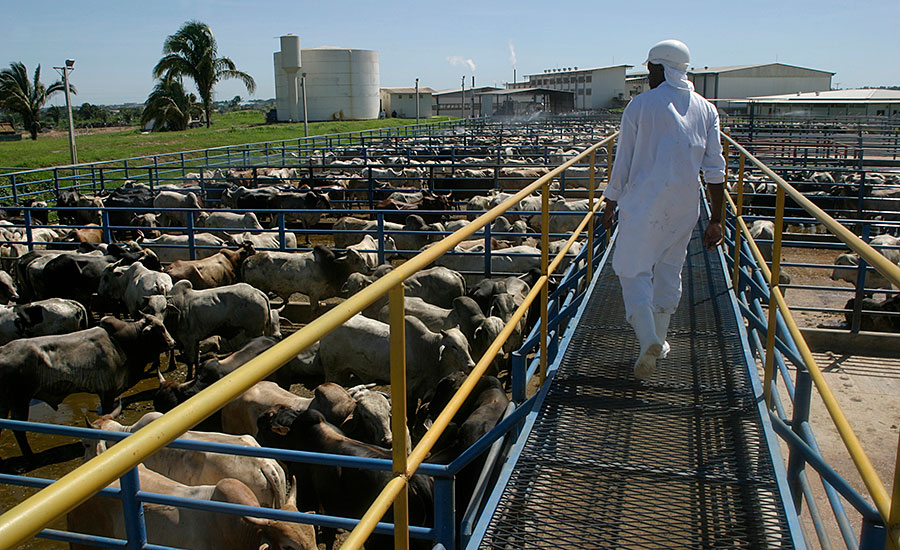 “They are a great tool for cattle and beef plants, because the less vibrations the better for workers,” Vogel says.

“Without dampening the impact, the result is sore or numb hands from running tools all day,” Vogel says. “It’s critical that tools fit workers’ hands well, too.”

“Oftentimes, when platform layout is designed — which is seen more with stun boxes — it’s as an afterthought,” Vogel says.

Bad design leads to bad alignment for shots, which puts animal welfare at risk and fatigues workers who have to overreach to stun the animals. Plus, this situation can lead to plants being investigated for their regulatory management if too many mistakes occur.

“This is an ongoing issue that should be discussed more, but companies don’t tend to fix problems until a crisis happens,” says Vogel.