The city of Asheville, N.C., is a place where culinary creativity runs wild. Much of that is in the form of alcohol – there may be more craft breweries per capita in Asheville than any other city. But there’s plenty of excellent food companies and restaurants to please any foodie, whether they’re a omnivore, vegan or anything in between.

Located not too far away in Fairview, one small farm has played a big role in the development of Western North Carolina’s local food system. Jim and Elizabeth McClure moved there in 1916 and helped found the Farmers Federation, an early cooperative designed to improve regional agriculture. From the McClures to the Clarkes to the Agers, the family has maintained Hickory Nut Gap Farm ever since.

The fourth generation of the family has taken the business further than any of their predecessors could have imagined. Jamie Ager and his wife, Amy, started Hickory Nut Gap Meats as a way to sell the farm’s pasture-raised cattle and hogs. Not only has the meat company’s product portfolio expanded over the years to include further-processed items like bacon, snack sticks, and sausages, but the company also is one of the leaders of the regenerative agriculture movement.

Hickory Nut Gap is located on hilly land in North Carolina, and over the years, the family farmers grew things like tobacco and fruit and sold eggs and dairy products. 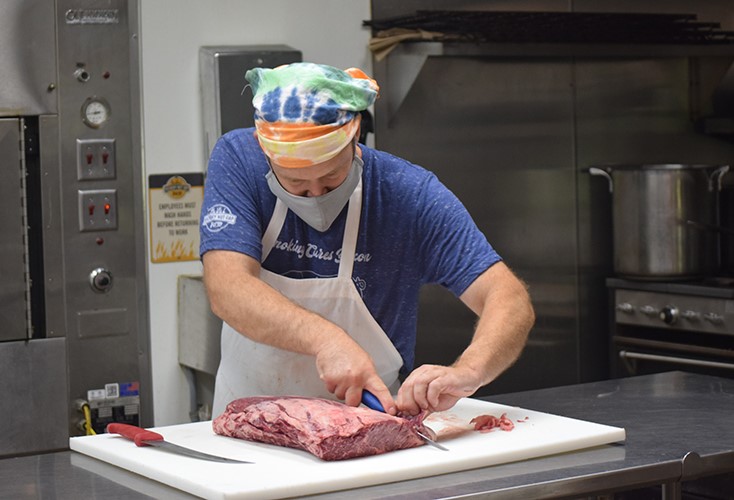 “Here in the mountains, we obviously don’t have the ability to participate in row crop agriculture and that “get big or get out” frame of mind,” says Jamie Ager. “The dairy we had here was maybe a 50 to 75-cow dairy. By the time milk prices stagnated, and it was the ‘80s farm crisis, it was pretty clear that it would going to be a pretty hard enterprise to sustain on the farm.”

By the time Ager was going to Warren Wilson College in nearby Swannanoa, the family had sold the dairy and was direct marketing eggs, raising livestock, and selling raspberries to Asheville restaurants. Ager received dual degrees in history and environmental studies with a concentration in sustainable agriculture. After going to West Virginia to visit author/pasture-based agriculture proponent Joel Salatin, Ager had a new vision for his family’s farm. While it might not be suitable for conventional agriculture, it had great potential in catering to niche markets in the meat and poultry industry. They had the land, they had the animals, and they had a nearby city where niche markets thrived.

“Then I realized we were in a lucky spot because we are so close to Asheville,” he said. 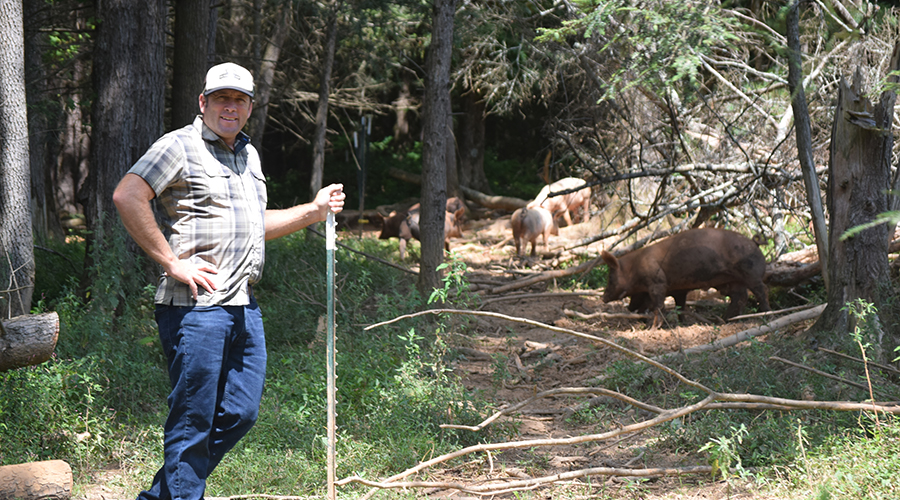 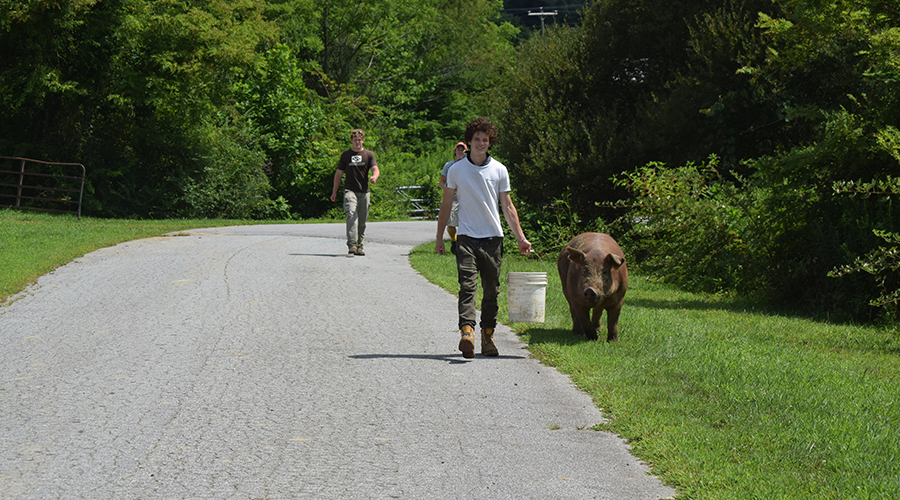 He and Amy drafted a business plan on how to direct-market pasture-raised meats and pastured poultry. They married in 2001 and started the process of direct marketing their red meat. Hickory Nut Gap Meats started with one restaurant in Asheville as a customer, but more customers soon followed.

“The whole concept of direct marketing was an important component of what we did and how we did it. For so long, farmers have been price-takers; we take the commodity price, and you get what you get at the sale barn,” Ager explains. “The awareness that we can control that relationship with the customer and do things differently than the industry does things is a pretty big paradigm shift from the way that farmers think.”

Ager notes that farmers for a century or more have been operating under the same principle — they have no control over the price they can get for the animal, so the only thing they really can control is the costs.

“When you’re only in control of your costs, then price reduction is the key, and you end up in this race to the bottom as far as who can produce it the cheapest,” he adds.

“On a historical level, it’s remarkable how cheap we can make our food nowadays, but there is obviously concern with some consumers about the quality of that food, the welfare concerns with livestock production, the environmental implications of various facets of livestock production,” he continues. “What we realized was that we could really use a brand story to drive that relationship between consumers and farmers in a way that builds trust, that allows for questioning and transparency, that allows for partnership.”

Like many small farms, Hickory Nut Gap Meats began by purchasing a few used chest freezers and selling meat at farmers markets. The company found consumers who connected with the story and the sustainable practices at the farm. Then more chefs came calling, as well as retailers. Finally, by the time that Whole Foods contacted the company about selling its meats, it was time to expand beyond just the animals at Hickory Gap Farm. Fortunately, Ager had by then taken an ag leadership class at North Carolina State University and had established a network of other families who could join as partner farmers.

One of the company’s core values is relationships, and Hickory Nut Gap has developed good relationships with its farmers. The company established a farmer advisory board to discuss company issues.

“We see this as a multi-stakeholder process, and we want to make sure the farmers we engage with, that everybody’s making a living, that we’re paying a strong fair price that’s consistent. We’re going to pay attention to all the pieces of the supply chain that matter, and hopefully the value on the shelf will reflect the opportunity that we create for the farmers and for consumers to know where their food comes from,” Ager says.

While it touts the benefits of grass-fed, pastured pork and beef, Hickory Nut Gap Meats is also an advocate for regenerative agriculture. By utilizing rotational grazing and other sustainable farming practices, the soil at these farms is organic-rich and can pull more carbon out of the atmosphere than conventional farming. At a time when the agricultural sector is being questioned on the amount of greenhouse gases it is contributing to the global warming crisis, regenerative agriculture is a carbon-negative farming system. Not only can Hickory Nut Gap boast the health benefits of grass-fed meats, but it can also talk about its environmental track record — all attributes that appeal to its consumers.

As demand grew, Hickory Nut Gap has expanded its offerings, from pork and beef cuts to sausages, bacon, meat snacks. Ager says that the decision to add SKUs came about, in part, out of necessity.

“What happens is that you end up with a customer for the steaks, and you don’t want to lose that customer, so you end up with a bunch of chucks in the freezer, and then you say, ‘Let’s turn them into sticks!’ Then you contact a stick manufacturer and go through that process,” he says.

Hickory Nut Gap has some on-site meat-cutting capabilities, which it sells out of its country store. Ager has developed a strong group of processors to slaughter the animals and make the further-processed products. The system works well, as far as Ager is concerned. His team of 20 employees has the capability for some on-site research & development work, but he is content at the moment to let his processor partners do the bulk of the work. 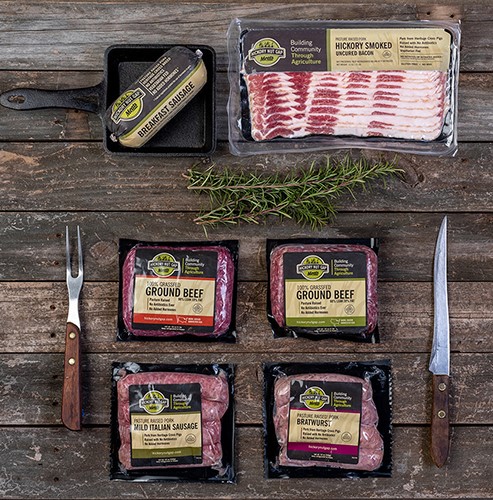 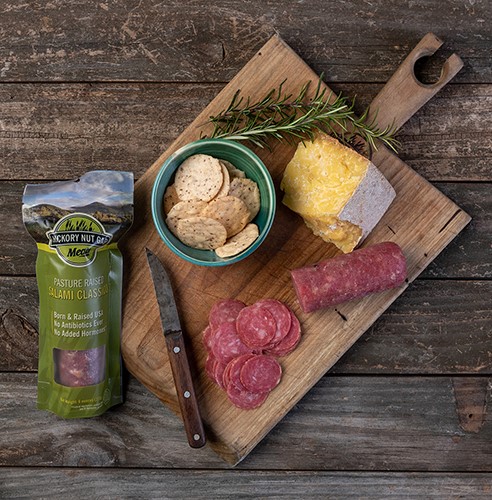 “The easiest business is always the one you don’t understand very well because from the outside it looks so easy to get into!” he jokes. “It turns out there are a lot of hard things to manage with processing that you didn’t know about, being the farmer.”

One of the most difficult tasks with processing is finding just the right companies who can match the specifications of Hickory Nut Gap’s customers. Ager notes that he and his farmer partners put in considerable time and effort into raising the animals to specifications, and all that work can be undone with one missed cut of a bandsaw. As a result, he has tried to find processors who are willing and able to grow along with Hickory Nut Gap and make the necessary equipment upgrades to produce more sophisticated products.

One of the company’s recent product releases was a line of beer brats, in partnership with Spicewalla Spice Co. and Wicked Weed Brewing — two other Asheville food companies. The varieties available are a Jerk Style Sausage, a Bratwurst Dinner Sausage, and an Appalachian-Style Sausage. Each one is made with a different variety of Wicked Weed beer. The collaboration of the three companies, Ager says, helps to further establish Asheville/Western North Carolina as a culinary hotspot.

As with many other small companies, Hickory Nut Gap experienced tremendous growth in 2020 as a result of the COVID-19 pandemic. Ager says that sales at the farm store almost doubled, and sales have been consistent into 2021. The supply chain issues that caused problems with larger processors never reached the company.

“These shorter supply chains actually proved to be pretty resilient. We were able to harvest animals, and these small plants were able to hold the capacity. Everything just worked out,” he says.

Consumers can find Hickory Nut Gap products in major cities in the Southeast, as well as some locations in New York City. An e-commerce option is intriguing to Ager, but it would require significant infrastructure investment. If nothing else, consumers can stop by the company’s farm in Fairview, pick up some fresh cuts or beer brats, and maybe even see the baby chicks or other farm animals.

“We’re 20 minutes from Asheville, and we really want people to touch and feel what agriculture is,” Ager says, “because we feel they’re just so disconnected from farming at this point. It’s one thing to read about it, but it’s another thing to be a part of the system, to touch a pig. That opportunity to share the family farm experience is something that we certainly think is an important component to our overall marketing strategy and allows for us to build a connection