Modern-day grocery stores have perfected the process of shopping. They are large, efficient and, most of the time, well-stocked. They are also, frankly, boring. Ninety percent of what you will find in a supermarket in Georgia is identical to what you find in Oregon. The brand names are all familiar, but the “wow” factor is gone – almost by design. The purpose of the store is to get you what you need and get you checked out as quickly as possible.

Now, imagine a grocery store that encourages you to stop and browse. The baked goods, the appetizers, the fully cooked dinners are all made in-house and change regularly. The wine section features everything from $100 bottles to $7 local vintages. The store shelves are filled not with the same-old, same-old but with a curated selection of gourmet foods. And the meat case… the meat case has eye-popping cuts of beef, pork, and chicken, as well as award-winning sausages and gourmet burger patties. Every step leads to a new idea for the next home-cooked meal. The pot roast or the stuffed pork chops? The Santa Fe burger or the cheddar mushroom burger? You may dash in for a pint of soup or a couple of steaks, but you’ll likely leave a half-hour later with a few appetizers, fresh produce, a couple of homemade cinnamon rolls, and some other specialties that you just had to try.

That experience is what you get at Inboden’s Gourmet Meats & Specialty Foods, a DeKalb, Ill., institution. It’s the kind of market that begs for exploration because you don’t know what you’ll find on the next aisle. Go looking for some craft beer and you will likely encounter the shop’s balsamic vinaigrette bar or a display of mouthwatering desserts. Order a pound of pastrami and discover an array of soups and appetizers. Inboden’s isn’t a big modern-day box. Rather, it’s what you get after you expand a building a little bit at a time over a period of about 60 years and eventually incorporate multiple buildings under a single roof. It may not have the pristine layout of a modern chain grocery, but it has a charm and a friendly feel that welcomes shoppers.

“We’re not selling 20-pound bags of dog food or packs of bottled water,” says Tom Inboden, president of the company. “People come in and say, ‘Where do you get the Coke?’ I say, ‘Go over to the gas station.’ I like Coke, but we’re doing things differently here.”

Inboden’s market is the most public side of its business, but it’s only one part of the company’s overall operations. There is a catering business that can feed groups of a dozen up to several hundred people. There is a separate business, Pig Roast Pros, which specializes in roasting pigs or providing all of the equipment and supplies necessary for a customer to roast their own pig. Then there is a food service business that sells to restaurants and retailers in the region. 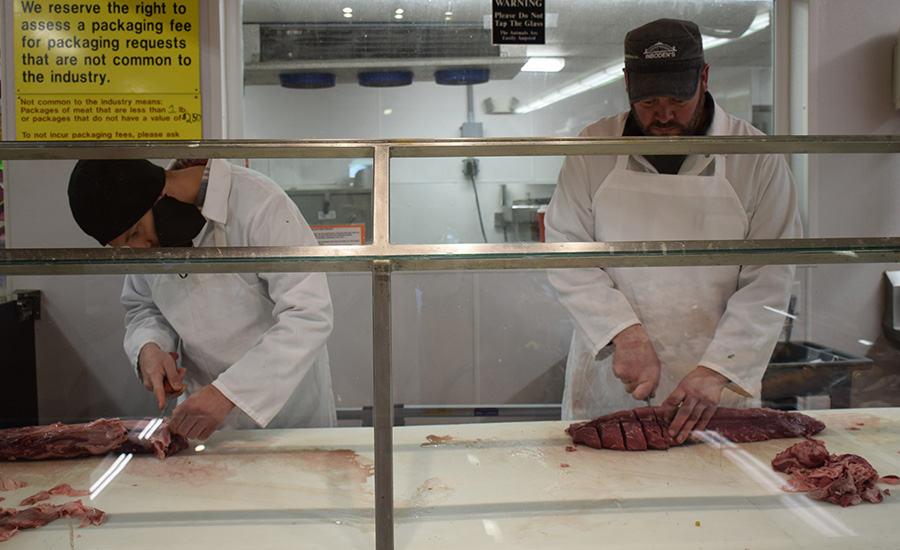 “We do a lot of portion control. We make specialty sausages, but we’re more of a job shop,” Inboden says. “We like to do things more attuned to the customer. For instance, we have our own pizza sausage recipe and have been quite successful with it. But we can reformulate or follow a formula for somebody else’s flavor profile. Everyone’s got their own ideas, and of course, in a college town, you don’t want to have the same sausage flavor profile.”

DeKalb is home to Northern Illinois University, which brings an additional 20,000 students to town in a normal year. That addition helps fill part-time job openings and increases business for the town’s restaurants… in a normal year.

The last two years have been anything but normal, and Inboden’s had to adapt, like other meat processors. Most of the foodservice business evaporated almost overnight, but the market became busier than ever.

“We heard we were one of the only businesses around that had meat. People were driving from 20 or 30 miles away, saying they couldn’t find meat at their local stores, especially ground meat,” said Dusty Inboden, Tom’s son and general manager. “They bought out pretty much everything we had. I was just grabbing everything we had prepackaged in our freezers and putting it in our bunker freezer, and it would sell.” 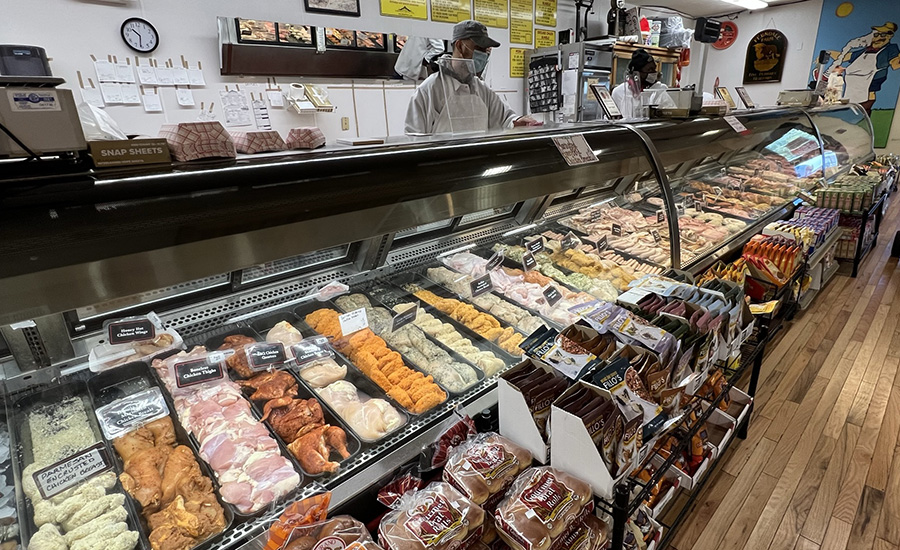 Just by good fortune, the company had bought a load of beef trimmings just prior to the start of the pandemic in 2020, so it was able to keep a steady supply of ground beef. The worst part of that surge, Dusty said, was the increase in hours that everyone had to work to keep up with the demand.

Tom compared that time to the hectic week before Christmas. “But it wasn’t a week. It was 6 to 8 weeks of solid throngs of people, and just trying to get what raw materials you could get in,” he says. The big packing plants had issues with worker shortages and shutdowns, so getting supplied with beef and pork was challenging. Tom notes that Inboden’s advantage was that its employees know how to cut meat and finish products, so the company could, for example, buy tri-tips and peel them in-house if that was the only option.

“Then we produced a lot of convoluted cuts,” Tom adds. “We would take a beef knuckle, which in retail would be like a sirloin tip roast, but we’d slice it thick and call it a pot roast. So we did some frankenscience.”

One of the positive side effects of the COVID pandemic is that many customers discovered Inboden’s for the first time. Some of them had been living in town for 15 years but somehow had never ventured into the neighborhood or seen Inboden’s newspaper ads. “Why are we even advertising?’ Tom asks with a chuckle. Fortunately, many of the new shoppers have remained customers a year later.

The start of something great
Ocie and Leona Inboden started the business as Inboden’s Supperette in 1962. They had a total of $22 cash, and Ocie expanded the building a little bit at a time, whenever he had the money to do so.

Tom Inboden was 11 years old when the business started. He was drafted into military service, and when he came back to DeKalb, he went into the family business full time. When Tom was 28 years old, his father passed away, and he became business partners with his mother. She ran the office and he ran the production.

Dusty Inboden, the third generation, is one of three brothers who were trained in meat cutting. He rejoined the family business about seven years ago, after working there in his youth. He became a cashier when he was 14 years old when his parents asked if he wanted a summer job. “I said yeah, but I didn’t know they were going to pick me up that same day to work! It kind of ruined my summer vacation before high school, but I had the chance to make some money,” he remembers. 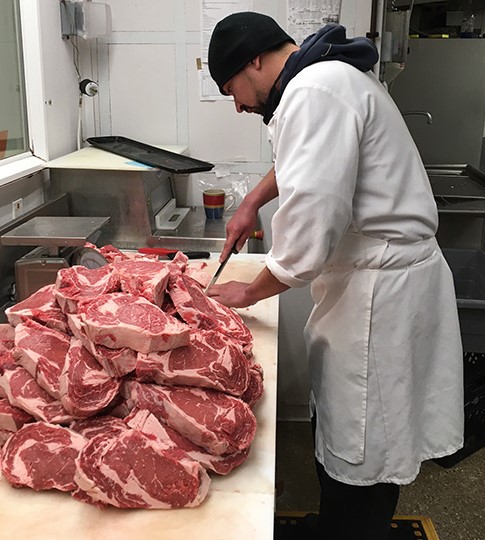 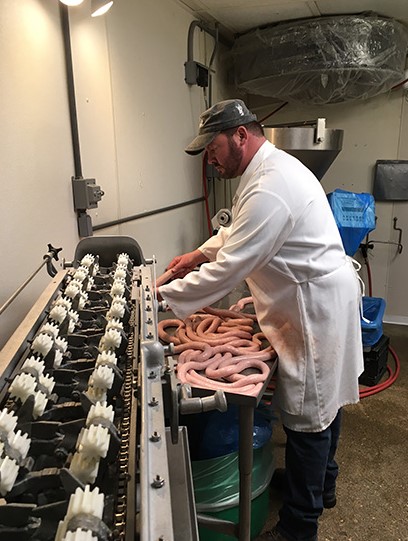 Inboden’s had undergone quite a few renovations and additions since Ocie started adding to it. The original supperette was an aisle’s worth of shelves to the meat counter and another aisle to the cashier. The building’s current configuration is the result of bringing four different buildings together about 15 years ago. The addition expanded the retail area and allowed for more processing room as well. Inboden’s still has a separate storage building for its packaging materials, pig roasters, and other equipment that isn’t currently in use.

The company’s market has gone through many evolutions, and its other businesses have evolved as well. The pig-roasting business has spun off into a separate division with a separate website; Inboden’s website is www.meatplace.com, but its pig-roasting business is www.pigroastpros.com. The company has five stainless steel roasters with glass windows. Customers who want a pig roast can either get all the equipment, pans, thermometers, seasonings, and other accoutrements needed for a successful meal, or someone from the staff can do it. Tom says that the company has been experimenting with a disposable thermal container that can keep a roasted pig hot without the use of a roaster.

Inboden’s kitchen has grown as well and has the capability to make everything from fresh desserts to appetizers and fully cooked entrees. The dessert counter offers cinnamon rolls, brownies, lemon bars, cookies, and much more. The fudge is Leona Inboden’s own recipe.

“I’ve never baked a thing in my life, but I’m the official taster. I’ve gained about 30 pounds,” Tom quips. “We’re making this new cheesecake. It’ll make your eyes roll back in your head if you like chocolate.”

When the building is fully staffed, Imboden’s had about 55 employees. Currently, with labor shortages, the number is around 47 or so, and the company has had to make some accommodations to work around the shortage. The market is now closed to the public on Mondays, so the employees can use the day to catch up on their food service and home freezer work. The company has also changed some of its product mix. It still makes its own corned beef and pastrami, but it no longer produces its own turkey deli meat.

The company used some grant money to invest in new production equipment. The company’s burgers are big sellers, but they required a lot of handwork. Tom explains that previous attempts to automate burger production resulted in patties that were too chewy. Recently, the company bought an inline grinding system and a flattening system to create burgers with the look and texture of a handmade product.

“We can mass produce these and not get so much protein extraction that the darn things eat like hockey pucks. You want them to eat tender,” he notes.

The addition of the new technology has helped to make work easier at Imboden’s, but it’s not the only element. The company’s inclusive employee policies welcome workers from all walks of life and all backgrounds – very important for a college town that is home to people from around the world. Dusty points out that the company’s employees represent all races, religions, and orientations. The company has employed future doctors as well as ex-convicts.

“A lot of people go through a stage in their life where they’re not exactly the world’s best citizen, and whether it’s counter-cultural or based on mental health, addiction or depression, we try to treat everyone who comes here like human beings and like family,” he says.

“For years and years, we’ve had kids who worked for us who went on to places like MIT. I’m sure they’ll remember fondly their days here getting greasy!” Tom adds.

The future of foodservice