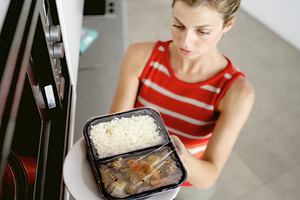 Demand for trays in meat, poultry and seafood packaging is expected to increase 3.9 percent per year to $860 million in 2015, according to Cleveland, Ohio-based The Freedonia Group Inc.’s April 2011 Meat, Poultry & Seafood Packaging report. The growth of trays is expected to be driven by a change in product mix toward larger and more expensive foam and rigid plastic trays as a result of the gains in share of case-ready meats and the increasing popularity of processed ready-to-cook meat, poultry and seafood products.

Freedonia projects that demand for foam trays will progress at a slower pace than nonfoam trays because of market maturity and intensified competition from nonfoam trays. Tray advancements are expected to be restrained by competition from flexible packaging formats, such as pouches and bags, with fresh meat and poultry, the research firm says.

Many retailers prefer case-ready systems including foam trays and film overwrap because these products provide the impression of being wrapped in the store, Freedonia explains. At the same time, the case-ready format removes labor costs associated with in-store meat cutting and packaging, and it permits retailers to place meat in display cases as needed, which decreases losses due to spoilage, the research firm says.

Foam tray demand also will be reinforced by mounting use of specialty trays, such as barrier foam trays for case-ready meats, according to Freedonia. For example, trays that provide increased oxygen and moisture barrier properties, trays designed to absorb blood and other liquids, and pre-padded foam tray with a foam pad glued to the inside of the base already are available.

Sustainable packaging trends also are expected to impact foam tray demand. For example, foam polypropylene trays, produced using a process that reduces carbon-dioxide emissions when compared to conventional thermoforming techniques, are available. In addition, suppliers are offering biodegradable foam trays. On the other hand, sustainable-packaging issues are expected to have more of a negative effect on foam trays, specifically conventional foam polystyrene types, with some cities already banning the use of them, Freedonia says.

Lessard agrees that significant work has been done on improving the recyclability of the trays with plant-based materials. In addition, he anticipates the future will bring an increased level of cost effective recyclability.

In addition, for tray sealers, machine cycle speeds have increased in recent years, making packaging more efficient, Lessard says.Integrated systems such as robotic case-packing also have made their way to the process, he adds. Enhanced sanitation features, including ease of access during sanitation, continue to be engineered into newer generation machines as well.

The draw of tray packaging