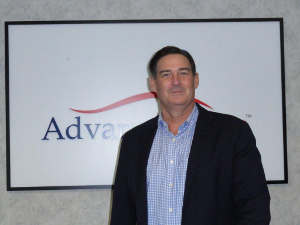 Cincinnati-based AdvancePierre Foods Inc. announced the appointment of John N. Simons, Jr. as President and Chief Executive Officer and member of the Board of Directors.  Simons brings over 20 years of food, agribusiness and consumer products experience to his new role.

“John’s long track record of fostering high-performing, customer-focused and innovative cultures, through building world-class organizational capabilities, and driving growth across a number of enterprises make him the right leader for AdvancePierre Foods at this point in its evolution,” said Dean Hollis, Chairman of the Board.  “In his new role as President and Chief Executive Officer, John will be responsible for leading AdvancePierre in the next phase of its journey to become the premier value-added protein and sandwich producer in the marketplace.”

“I am pleased and honored to lead the great team at AdvancePierre at this time of significant opportunity,” said Simons.  “I am excited to build on the platform established during the last several years, and to work side by side with our team to serve our customers and win in the marketplace.”

Simons, 52, has led businesses with revenues ranging from $30 million to $10 billion.  He served as President and CEO of Swift & Company, Inc., a $10 billion global red meats processing company.  Simons was President and COO of several divisions of Conagra Foods Inc. and earlier in his career, he spent nearly a decade in executive positions at Cargill Inc.  Most recently, he founded Fir Hill Ventures, advising beef industry producers on developing profitable international growth strategies.

Simons earned bachelors’ degrees in Economics and Political Science from Stanford University, as well as a Master of Business Administration degree from the Harvard Business School.  He was also a member of the 1980 United States Olympic Swim Team.

AdvancePierre Foods appoints Celeste Clark to Board of Directors

Protecting your plant and workers and avoiding costly shutdowns due to COVID-19 is critical. Recording screening information by paper can result in delays and incorrect information. Digital Health Screening Tools allow you to make sure screenings are being performed accurately, results are being stored and available for rapid response and analysis.

The Coronavirus pandemic has created many challenges for small processors, but it has created many opportunities as well. As consumers see empty meat cases at grocery stores and hear reports about COVID-19 outbreaks in large meat plants, they may turn to other sources for their protein purchases.
View All Submit An Event