Arby’s delivers its most successful new product in company history — a breakthrough brisket sandwich that bolsters its image as an innovator of high-quality sandwiches in the quick-serve marketplace. 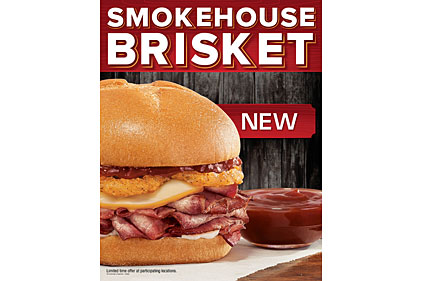 Turn on the TV today, particularly just before a standard mealtime, and you’re likely to be bombarded with commercials from restaurants touting something new, tasty, convenient or unique — particularly from companies in the highly competitive quick-serve restaurant (QSR) space. It can be challenging for a consumer to notice the important points amidst the noise.

Yet, in the fourth quarter of 2013, Arby’s Restaurant Group Inc. experienced success that the meat and poultry industry ought to have noticed — the launch of its limited-time-only Smokehouse Brisket Sandwich, a brand new menu offering that, frankly, aims to take consumer perception of Arby’s to the next level.

“It’s the first time in Arby’s 49-year-history that we have served brisket in our restaurants,” explains Len Van Popering, senior vice president, Product Development & Innovation, for Arby’s. “Roast beef is at the heart of our heritage, and it will always remain a very important part of our business. However, we also have a number of other meats on our menu, and we are known for being a great sandwich destination.”

The Smokehouse Brisket started as an Arby’s development project, but quickly became an achievement of collaboration, with Arby’s beef suppliers and the Beef Checkoff working with the restaurant to develop, promote and perfect the concept before it hit all of the company’s 3,400-plus restaurants. (See below for more info on partnering with the Beef Checkoff.)

Arby’s begins each of its product-development projects by taking an analytical look at the experiences and flavors that resonate with their customers, based on in-the-field research. The seed concept, in fact, for the Smokehouse Brisket sandwich was discovered this way, adds Van Popering.

“Through [our] process, we uncovered that one of the most enticing food demands [from consumers] was to be able to get layers of smoky flavor,” he explains. “That was the imperative that influenced the ultimate development of the Smokehouse Brisket sandwich.”

With the need for “smoky, layered flavors” in hand, Arby’s first looked to its current menu of proteins, says Neville Craw, corporate executive chef for Arby’s.

“But our roast beef, turkey, sliced Angus beef or corned beef and a sauce just wouldn’t meet that requirement,” Craw explains. “Once we ruled out our in-house proteins, we realized smoked brisket carries a wonderful amount of smoky layered flavor while delivering on that beefy note — it was a ‘Eureka!’ moment for us.”

The product development and innovation team then aimed to make sure the brisket met the exacting standards for the sandwich overall.

“We looked at various types of smoking techniques and different flavors, and we landed on a brisket that was naturally smoked, hickory smoked, for 13 hours,” Van Popering says. “This process allows us to deliver a brisket that is flavorful with the right balance of different tastes and aroma, which really delivers on that key consumer insight we started with.”

Everything on the sandwich was added to impart another layer of flavor to the meat, rather than disguise or drown it. Even the slightly sweet bun, Craw says, complements the ingredients inside and lets them do the talking.

“The smoked Gouda cheese gives balance — it was another layer of smokiness, but then there’s a creamy element to it,” he says. “The barbecue sauce added the sweet-and-tangy flavor we needed, the crispy onions added texture, and we also included what you wouldn’t normally think to include with this type of sandwich: mayonnaise.

“The mayonnaise helps drive the smoke that comes off that brisket into your mouth, as a carrier, and it balances against the sweet and tangy, the creamy, and the smoky,” Craw adds.

Arby’s had to make a leap of faith (and investment) to bring the specialty smoked Gouda cheese into the fray — something that’s “not an automatic decision,” Van Popering says, but one that was very much appropriate for this sandwich to meet the original goal. Other than the smoked Gouda and the brisket, Arby’s already had the ingredients in the supply chain from use in previous sandwiches and concepts.

The new protein is the star of the show for the Smokehouse Brisket sandwich, and Arby’s wanted it that way from the start.

“Arby’s guests love the flavor of the beef, no matter what beef product we’re serving,” Van Popering says. “In so many restaurants, the idea is to use the beef flavor as the foundation but add lots of different flavors on top of it to make it more exciting. … We take an almost minimalist approach to let the flavor of that protein shine.”

With the brisket, Arby’s invested plenty of time, effort and training in order to get the product exactly where it need to be to carry the sandwich. According to Van Popering, it became clear that, with brisket as the centerpiece of the item, there was no reason to shortchange the effort to get the product just perfect during the development phase.

“Sometimes making an investment in a whole new process or operational model just makes sense, but the beauty of this sandwich is, it fits right into our operating model,” he explains. “So there were certainly tweaks here and there, but overall our teams were able to execute it with excellence.”

Arby’s brisket is unique, and it is sliced fresh in store, just like all of the restaurant’s proteins. The first big challenge, Craw says, developed out of the obvious size variances.

“It’s not cookie-cutter, right? Every cow is different,” he says. “So that had to be trained, and it was a great partnership, not only working with the supplier on getting the right specs for smoke level, trimming and sizing, but also on the restaurant operations side, where they have to deliver the same sandwich every time at all the restaurants.”

Craw reports that the process was a smooth one, and it’s one he’s particularly proud to discuss.

“In my nine years here, this may be one of the greatest achievements in as far as getting that test-kitchen, one-off, gold-standard sandwich experience to be transferable to all our restaurants,” Craw admits.

For its part, Arby’s could not be more pleased with the results of the sandwich. The Smokehouse Brisket Sandwich itself was the most successful menu item in the company’s nearly 50-year history, prompting Arby’s to set the Smokehouse Brisket sandwich as a re-occurring seasonal item for 2014.

During the months the sandwich was offered, its sales represented 15 percent of the sales mix, and the company sold an average of 64 Smokehouse Brisket sandwiches per store, per day.

Another notch of success

The Smokehouse Brisket sandwich may have re-invigorated some consumers to visit Arby’s and try the product, with its catchy commercials highlighting the “smoked for 13 hours” brisket, but this wouldn’t be the first success story in recent times for the chain. Since it was acquired by Roark Capital Group in July 2011, the restaurant chain has been on an upward swing.

“There’s momentum at Arby’s,” Van Popering states. “We just announced [in October 2013] that we’ve completed 12 consecutive quarters of same-store sales growth, which is quite the feat.”

Beyond the financials, those following Arby’s new menu items can see innovation flowing through the system again. Arby’s Reuben sandwich is a perennial favorite, Van Popering says, and the company partnered in May 2013 with King’s Hawaiian to sell a new roast beef sandwich on a King’s Hawaiian bun (which returned to the menu in December 2013 at presstime). Furthermore, Van Popering says the Grand Turkey Club sandwich has been a remarkable success over the past year.

“In terms of the role we serve in promoting these great proteins, as well as meeting the desires of our guests, it’s been quite a year for Arby’s,” he says. Today, Arby’s is committed to moving its products through the R&D pipeline quickly, given how fast market demand changes, but won’t sway from making sure it moves thoughtfully and in alignment with what’s relevant to its customers.

“We want to bring to market sandwiches that our guests recognize as familiar, yet with an Arby’s twist,” Van Popering says, adding that Arby’s aims to offer sandwich flavors and experiences that consumers can satisfy only by visiting an Arby’s location.

“We have a proud heritage, but consumers who haven’t visited Arby’s in the past five years don’t know just what a great restaurant it’s become,” Van Popering concludes. “Through products like the Smokehouse Brisket, we aim to attract attention and make irresistible the proposition that, even if you haven’t been to Arby’s in years, now is the time to do it.”

How to work with commodity boards to launch successful new products

To introduce its first-ever brisket product to its customers, Arby’s Restaurant Group Inc. tapped into its long-standing relationship with the Beef Checkoff Program to build consumer awareness of the new Smokehouse Brisket sandwich.

Over the years, the Beef Checkoff has helped companies such as Arby’s launch new beef products to stay on the forefront of the latest culinary trends while driving profits. In addition to providing merchandising and marketing support, beef-industry experts collaborate with manufacturers on product ideation and development with funding from the Beef Checkoff, a fund into which every beef farmer, rancher and importer contributes.

There are a lot of considerations that go into launching a new product, so manufacturers can benefit from working with a collaborative group of industry professionals to tackle aspects ranging from consumer insights, availability of product, and fabrication and preparation techniques. This level of customized support helps companies advance their efforts and effectiveness in bringing new products to market.

Many times during the ideation process, companies identify a beef item that attracts a new customer base or a cut they can add to their product mix, such as the newer innovative cuts from the beef chuck or round subprimals — such as the Petite Tender and Flat Iron.

Looking ahead to 2014, the Beef Checkoff will continue to be a resource for companies that sell, market and menu beef. The team will have an emphasis on educating manufacturers on the latest market research and how the findings can shape new processing methods, cuts and culinary applications for beef.

Shenoa French is the director, Innovation and Product Solutions with the National Cattlemen’s Beef Association, a contractor for the Beef Checkoff Program. To learn more about collaboration opportunities with the Beef Checkoff, contact Foodservice@Beef.org.

Land O'Frost's acquisition of Wellshire Farms: 'Well' on its way

Chiming in on culinary trends

Sustainability Report: Slower on the uptake