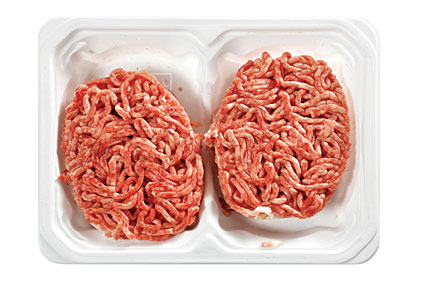 For retailers and consumers, convenience comes packed in trays. Trayed entrees and meals, and case-ready meats, poultry and seafood products simplify handling at the retail level and meal preparation for consumers.

In fact, “research has … intensified on developing products for all meal occasions,” according to a market study by Packaged Facts, Meat and Poultry Trends in the U.S.

The growing popularity of these products is spurring development of tray and lidstock materials and equipment associated with tray filling and sealing.

Trays and lidstock can be monolayer structures, including a new freezer-grade recycled polyethylene terephthalate (rPET) lidstock.

However, multilayer materials frequently are needed to protect products from oxygen and extend shelf life. Traditionally, an ethylene vinyl alcohol or polyvinylidene chloride layer provides the barrier properties. Other options include coatings and oxygen scavengers. In fact, trays can be thermoformed from PET or ovenable crystallized PET blended with an oxygen scavenger. Resulting trays accept film or foil lidstock and can be recycled with other PET packaging.

Barrier coatings, typically found on lidstock, include aluminum oxide or silicon oxide. However, nanotechnology-based barrier coatings are being commercialized. For example, a nano coating of purified vermiculite consists of a carrier resin with nanoparticles measuring 1-3 nanometers thick and between 10 and 20 microns in width and length. These tiny particles create a torturous path that slows gas transmission. In addition, negatively charged nanoparticles block positively charged aromas and flavors.

For meal concepts, barrier film may be microperfed to achieve the different permeabilities needed by protein, carbohydrate and vegetable components. Optimum shelf-life protection requires precise positioning of the lidstock on the tray.

Tray options include reclosable designs with friction-fit overlids and a skin pack, which eliminates headspace by drawing the lidstock down over the product. This close contact prevents formation of ice crystals and enables steam-cooking because the film balloons as the food heats.

A paper/film tray couples barrier properties with sustainability advantages since a significant percentage of the package is derived from renewable wood fiber. The concept involves vacuum-forming the film to paperboard blanks. After the food has been consumed, the film and paperboard separate for recycling. Padifood has adopted the package for its refrigerated, ready-to-eat Asian meals sold in The Netherlands.

Another sustainable option, a peelable lidstock, eliminates the need for paperboard sleeves or folding cartons. The laminate’s peelable layer, which can be printed on both sides, carries product branding and nutritional information. When it is removed, a clear film layer remains sealed in place for cooking. The design reduces material costs 10-20 percent, cuts package weight more than 45 percent and saves tons of paperboard.

Tray-loading and sealing innovations include higher speeds, greater use of robots, minimization of film waste and the flexibility to run more than one pack style on the same machine.

A number of robots meet food-safety requirements with stainless-steel parts, compatibility with washdown conditions and end-of-arm tooling, or grippers, capable of hygienically handling raw protein. With a range of speeds and payload capacities available, robots can automate tray loading, especially in situations where multiple ingredients must be placed in the tray in a specific position.

Integrated vision systems give the robot the “sight” needed to pick up, orient and place product, even when multiple in-feeds are involved. User-friendly operator interfaces and sophisticated software simplify programming and operation.

For modified-atmosphere packaging lines, which customize the environment inside the package to extend product shelf life, a gas analyzer records the residual oxygen level of every package in real time. The system, which also can record carbon dioxide levels, not only provides the process control and traceability data required to meet food-safety protocols, but also eliminates the need for manual, destructive testing.

It also should be noted that high-pressure pasteurization, once limited to relatively small pouches, now includes machines capable of handling larger tray packs.

Hallie Forcinio is a contributing writer.

The draw of tray packaging