Attention to detail pays off in hide removal 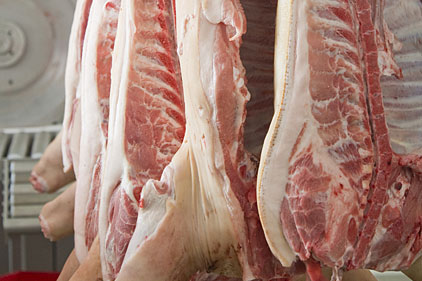 Quality hide removal begins with making sure the process is done as sanitarily as possible, and in today’s world, as efficiently as possible.

“We have to assume the hide is 100 percent contaminated,” says Trevor Caviness, president of Caviness Beef Packers, in Hereford, Texas. “It is impossible to slice through a contaminated surface and not pass anything along to the meat surface. Employee GMPs are extremely important.”

In addition, the challenges of hide contamination change from season to season as to what comes in on the animal’s hide, says Sid Cunningham, director of food safety and quality assurance at Harris Ranch Beef Co., in Selma, Calif. For example, many processors deal with muddy cattle from the rainy season or snow in colder months. In dryer climates, such as where Harris Ranch is located, processors deal with dust.

“No matter what you do, there is always something you’ve got to watch and be mindful of when you are taking the hide off to make sure you are doing it sanitarily and doing it in a best practices-type manner,” Cunningham says.

Processors skinning swine face many of the same challenges, including not contaminating the pork carcass during skinning, clean skinning that maximizes meat yield of the carcass and not tearing holes in the hides so they are suitable for leather processing, says Roger Williams, president of Williams Sausage Co., in Union City, Tenn.

In turn, quality removal of the hide reduces the risk of passing contamination on to the carcass, says Caviness.

“A poor job of hide removal is almost impossible to adequately correct with hot water or microbial interventions,” he says.

In addition to reducing potential cross-contamination from the hide to the carcass, quality hide removal also reduces dressing defects, such as cut folds and cut flaps, that occur if a hide isn’t removed properly.

“When you end up with a cut fold or a cut flap, you have a harborage or hiding spot for bacteria that your interventions may not be able to reach,” Cunningham says.

As far as skinning and hide removal equipment goes, processors say equipment has not changed much in the past 15 years. For example, Williams Sausage currently uses a drum-type skinner for its pork, which it has been using for the last decade and a half. Most cattle hide removal operations have a side puller, up puller and down puller, and the system is semi-automated. Even with the three major equipment steps in hide removal, labor is still required to use air knives or skinning knives to get the process started, Cunningham says.

“Just the employment of the side pullers has replaced jobs that people used to do,” he explains. “You still have to have a person to operate it, but the way it works is more of a pull rather than a cut, so it’s a lot cleaner. You don’t have the same potential for cross-contamination that you had when you have a person do it. You have a lot better presentation of the carcass — a lot cleaner, smoother surface of the carcass where you haven’t potentially cut into it with a knife, creating a harborage.”

Equipment also needs to operate properly in order to get the best carcass yield and most efficient hide removal, Caviness says.

Williams agrees that upkeep is important because downtime during production is costly. His company’s skinner has a multitude of air valves that operate the skinner, and it is critical to keep these valves in good operating order and maintain a dry air supply for operation.

“The skinner we have is fairly complicated, which makes maintenance an issue,” Williams says. “It would be better if improvements can be made to simplify the operation.”

Upkeep and preventive maintenance is critical because one of the worst things that can occur is machines operating improperly.

“If you get your timing off — for example, your puller operates too fast or pulls too hard — that’s an instance where it can cause a situation of contamination,” Cunningham says.

While most machines today have a hygienic design, if the equipment is not maintained, the design is for nothing.

“Equipment manufacturers and the industry have learned together and made things more hygienic and improved the design,” Cunningham says. “They have improved simple things such as corners — making corners rounded — and building in better interventions or sanitizer systems for hide-pulling devices. Years ago, the sanitizer system or the rinse system for those pieces of equipment during daily operation was an afterthought. A lot of facilities went ahead and put that in as they learned that it helped reduce contamination. As of today, it’s a primary feature. … On top of that, with daily sanitation, after you are done processing, they are so much easier to clean than they used to be.”

“It would be nice if robotics could be introduced for more of the process in beef,” Caviness says. “They have not thus far because of the somewhat large variance from one carcass to another. If this can be accomplished, it would take out the element of human error.”

Cunningham agrees that long term it would be nice to automate the entire process.

“I’m not saying that a machine can do it necessarily more sanitarily than a human can, but there are still opportunities to automate a little bit more, especially where we open a high-risk area,” he says.

Manufacturers are even working on improving some simple things such as skinning knives to advance the process, he adds.

Cunningham also believes that companies will continue to forge ahead with additional interventions and skinning interventions that can be put in line. He believes interventions will be the area where the industry will see a lot more development.