In the wake of a tough year, Butterball has invested in automation, sustainability and operational efficiency to position itself for its next big run.

When industry history books look back on the year 2017 for Butterball LLC, there’s little doubt they will consider it one of the more challenging years on record for the Garner, N.C.-based turkey processor. Indeed, the closing of the Montgomery, Ill., plant (and the associated pork business) in May and the accidental death in September of a maintenance worker at the Mount Olive, N.C., plant only added to the strain that market conditions in the turkey industry already had placed on the company.

“We see all the headwinds that all protein companies are dealing with and have been for the past two or three years, and an over-supply situation that’s very specific to the turkey industry,” says Kerry Doughty, president and CEO of Butterball. “In spite of that, we’ve continued to grow not only our whole-bird business, but also our ‘win’ categories [in value-added products].”

This growth has been centered around a focus on utilizing the brand equity in whole birds (Doughty says 1 in 3 whole birds purchased at retail at Thanksgiving were Butterball-branded birds) and extending it to “every day products” such as deli, turkey bacon, sausage and burgers. 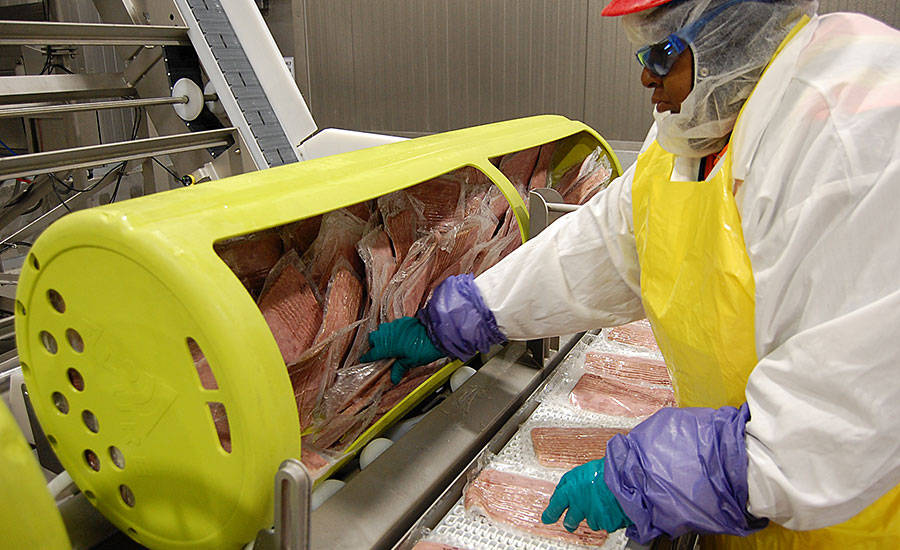 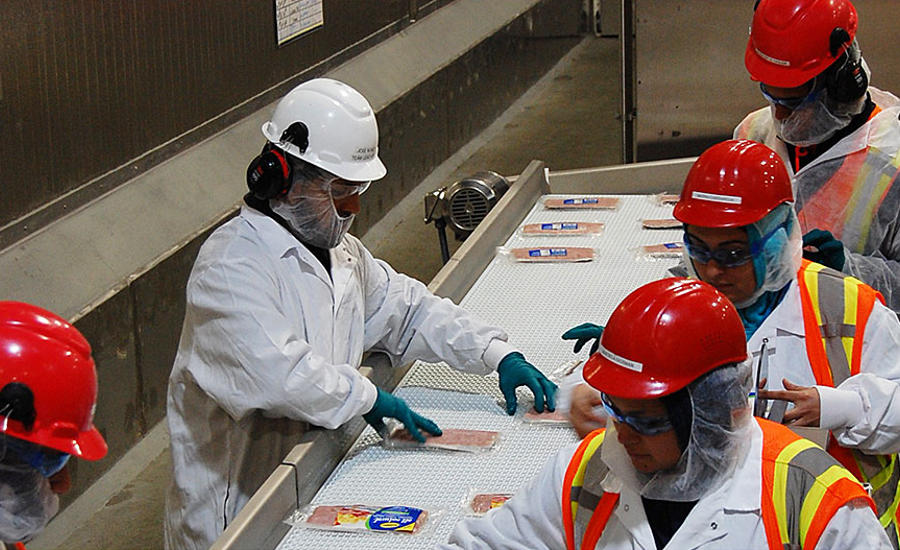 Mount Olive's HPP room features a process flow that attempts to keep ergonomics and operational efficiency at the forefront.

“The dark meat is where we’ve really worked to get back to a profitable whole-bird equivalent (price), and burgers, bacon and sausage use that dark meat,” he says. “I’m pleased and excited to report that our share is growing in those categories, and all of that is Butterball [branded]. Our volume from 2014 through 2017 tripled on turkey burgers.”

All this ties into Butterball’s newest three-year plan to become more of a player in differentiated products, says Al Jansen, executive vice president of Sales & Marketing for the company. While there’s nothing wrong with being a commodity player, differentiation of a strong brand comes with a different set of strategies.

“It means you have to continue to make your brand relevant and compelling, and differentiate your products,” he says. “We continue to push value-added because … it’s not that value-added is immune to marketplace changes, but it does give you some insulation to some of the swings in the turkey market.”

The push to value-added has extended to Butterball’s organic and no-antibiotics-ever (NAE) Farm to Family brand as well, says Doughty, and he sees “opportunities for innovation and expansion within those two specific lines.”

The retail landscape today also offers Butterball the opportunity to “hunt in new places in new ways,” says Jansen. “Everyone is trying to figure out how to do business with Amazon in the perishables world, and there are other places where we haven’t done business that we need to play.

Alice Johnson, Steve Valesko and Brian Rodgers discuss a variety of topics from animal care to operations improvements to worker safety at Butterball in new video Q&As online this month.

“Then, in some of our channels, we want to go about finding customers and opportunities in a more information-driven manner,” he adds. Another area many processors are keeping an eye on, Butterball included, is the online ordering, delivery and meal-kit businesses — still adolescent segments, but making gains as Millennials begin to flex their spending muscles. Jansen expects innovation across all the channels moving forward over the next three years.

“We’re not going to just be the largest turkey company that makes the same products everybody else makes every day of the week,” he says. “We are going to continue to differentiate and challenge ourselves to be as compelling as we can be across all these channels.”

With a new three-year strategy in place and the closing of the Montgomery facility behind it, Butterball has spent the last year-plus shifting production lines to maximize efficiency, adding technology to improve its sustainable footprint (and cost) and installing new processing equipment, including a new high-pressure processing (HPP) system in its massive Mount Olive facility.

Butterball’s Raeford, N.C., plant has gone from being an empty facility in 2015 when Butterball purchased it (featured in the January 2016 issue of The National Provisioner) to nearly full, production-wise. It has gone from 100 employees to nearly 650 expected at the end of this year, Doughty says. 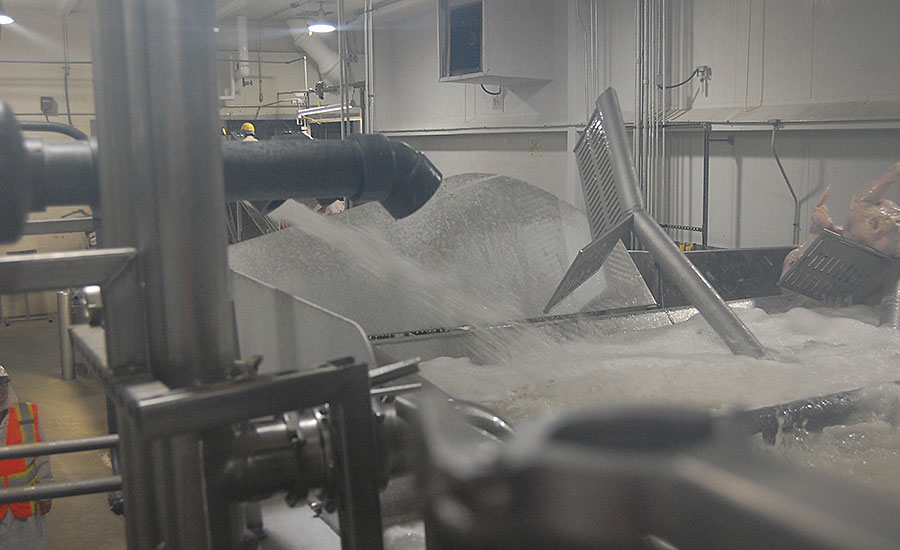 Chilled water captured from birds leaving the chiller is pumped back into the chiller (just left of center of photo), which Butterball has estimated saves the Mount Olive facility (four chillers) about 1.1 million gallons of water per year.

“You figure out that shoehorning [a line] in here and there isn’t optimal but you need to do it to take advantage of the market,” he explains. “Now that all our facilities are essentially full, before we plan brick-and-mortar [additions], we’re going back and optimizing, consolidating particular operations to one plant.”

To make room for the bacon and burgers in Raeford, tray-pack processing will be moved to the Mount Olive facility, which will help operational efficiency and the shelf life of the product. Over the past five years, Mount Olive’s tray-pack lines have been fully converted to high-speed lines with robotics and automation, and it will continue to grow, says Steve Swan, Mount Olive complex manager.

“We will pull two Raeford machines here and purchase a brand new one, and then in another year, we’ll add a seventh in tray-pack,” he says.
Expansion is also expected on Mount Olive’s new HPP line, which has been up and running for less than a year now, says Jandrain.

“To have it up and running less than a year and already have the first phase getting fairly tight, it’s good to have it fill up that quickly,” he says. “We’ve got one machine that’s actually set up to be scaled to grow the capacity, all we have to do is literally put another intensifier on the pad that is already there.”

Installing the HPP system, however, required much more heavy lifting. In fact, it forced a change that would push the facility down the list of “Tallest Buildings in Mount Olive” (if such a list existed).

The Mount Olive facility’s old high-rise freezer was chosen to house the system, but demolition of the room posed significant challenges. First, Jandrain says, the racking system was a primary structural support for the building’s exterior. Second, the room was surrounded on all sides by production areas that needed to continue to operate. Six months of work to deconstruct the room and install the new HPP system have paid off, not only in capacity, but also in product flow, says Craig Leviner, manufacturing director for Mount Olive.

“You don’t have to take the product off the belt to get it from point A to point B,” he says. “Once you unload the product, it’s in flow, and that’s what we’re trying to teach.”

Swan adds that the layout of the room helps with ergonomics as well.

“[It’s] very easy on our workers’ bodies; we’ve got a rotation in that room that has developed, but for the associates, it’s just laid out very nicely and flows very smoothly,” he explains. 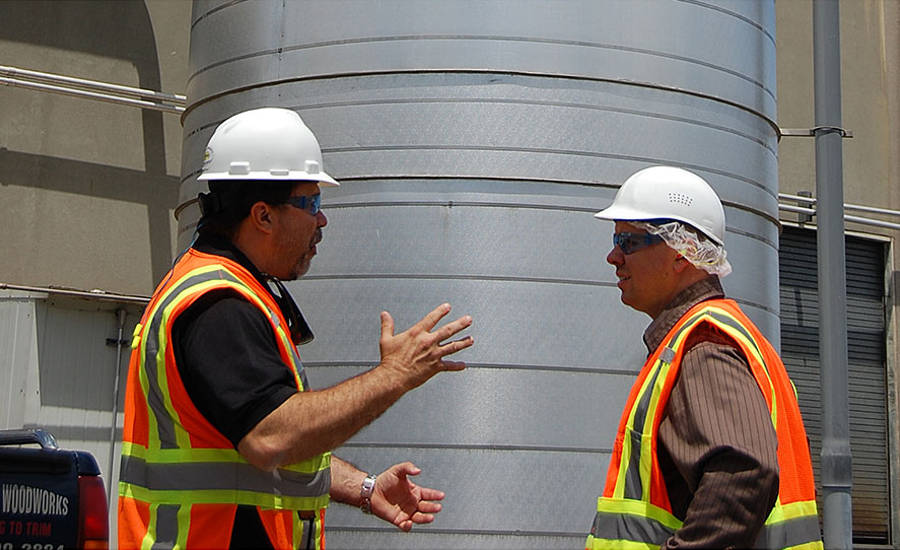 On the sustainability side, Butterball has spent the last few years engineering and investing in solutions to lower its costs, resource usage and wastewater emissions at the Mount Olive facility as well. The plant sends its treated wastewater to spray fields that add an extra layer of management to the process, Jandrain says, so reducing the water usage was crucial.

With the help of its employees, each of the Mount Olive bird chillers has a system to capture the water that drains out and off the birds leaving the basins, and pump it back into the chiller. Ed Spafford, utilities manager at Mount Olive, says the solution has saved a tremendous amount of water.

“After all the calculations, catching all the water coming from the birds coming out of the chillers on all four of them, we estimated [we save] on the very low end, 1.1 million gallons per year,” he adds. “We’re able to capture the BTUs as well of the chilled water, so we’re saving mechanically as well as the water savings.”

Mount Olive also installed heat transfer equipment in the boiler room stack, to recover and use heat from the boilers for process water. The system allows the plant to heat water for sanitation and other purposes to 110 degrees, saving on direct-fire heating costs (which are still used to polish the water to the exact temperature needed).

Many small projects are ongoing, including the installation of reversing coils on freezer blast cells, which has reduced freezing times by half an hour on average, says Spafford.

Despite the high pressure to perform over the last few years during challenging times throughout the industry and even within the walls of the company, Butterball hasn’t wavered in its commitment to growth. With its current roster of facilities near capacity, the positioning Butterball has done appears to have it primed for its next big run, when overall market conditions improve and plant capacity requires expansion or acquisition once again.  NP