After a multi-year break, growth monster Monogram Foods has returned to the acquisition game and already snapped up two processing plants in six months — including long-time partner Quality Food Processors in Denison, Iowa.

Even a superstar needs a breather sometimes.

After a roughly 15-year run of unparalleled acquisitive growth — and numerous awards for what today might be called “beast mode” growth (including The National Provisioner’s Processor of the Year Award in 2017) — Memphis, Tenn.-based Monogram Foods began to focus its improvement efforts inward, tightening up its strategies, improving its operations and generally staying on the acquisition sidelines as it prepared its next moves.

Fast-forward four years, and Monogram’s “hibernation” ended, when in June 2021, it completed the acquisition of Quality Food Processors (QFP) in Denison, Iowa — a plant that had been supplying bacon the previous five years to Monogram’s Harlan, Iowa, plant only 27 miles south on Route 59.

“Because QFP in Denison supplied products for the Monogram Foods’ Harlan plant, these teams had been working together for years, and we’ve had a customer relationship with one another for a long time,” explains Karl Schledwitz, chairman and CEO of Monogram Foods. “These plants do fit hand in glove, they're close to each other, and they offer so many synergies, it was a natural fit. This is probably the most seamless integration of an acquisition we’ve ever had.”

Todd Hansen, who previously owned QFP and is an equity holder in Monogram Foods, says the acquisition injected a lot of optimism and opportunity for the Denison team.

“[The acquisition] allows everybody to think differently around the way the business and processes go, and we probably didn't have that same level of opportunity as Quality Food Processors, because we ran very lean,” he says. “It’s also very enlightening that QFP gets to participate in the process, because the team brings a lot to the table, and the synergies between the two teams are helping Monogram Foods get to a level where one plus one equals four.”

With all the familiarity between the teams coming together, Schledwitz relays that it hasn’t taken long at all for Monogram Foods to begin designing its future in west-central Iowa. Monogram is entering “beast mode” in that realm as well.

“Planning sessions about how to expand both plants are actively happening now, but what happens is really unique here,” he says. “When we expand the Harlan plant, it increases demand for our Denison team, which is where the ‘one plus one equals four’ truly happens. 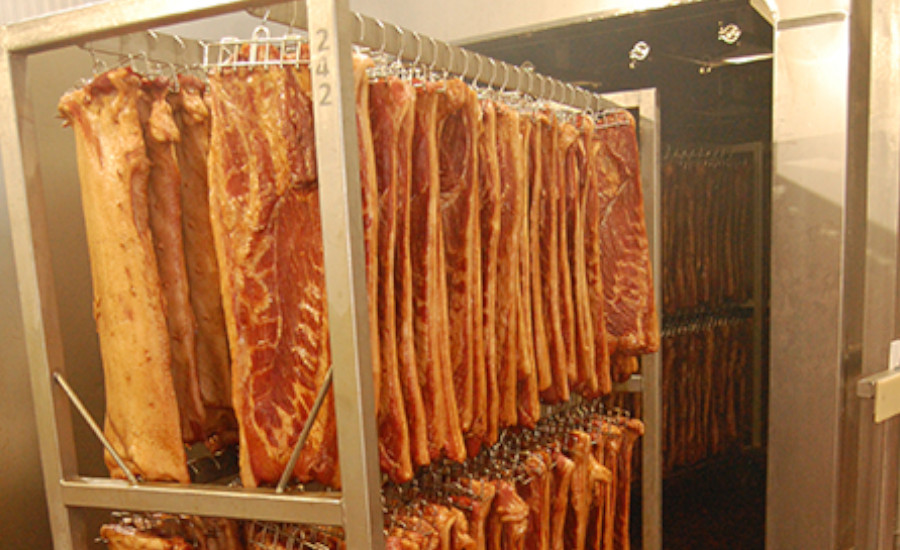 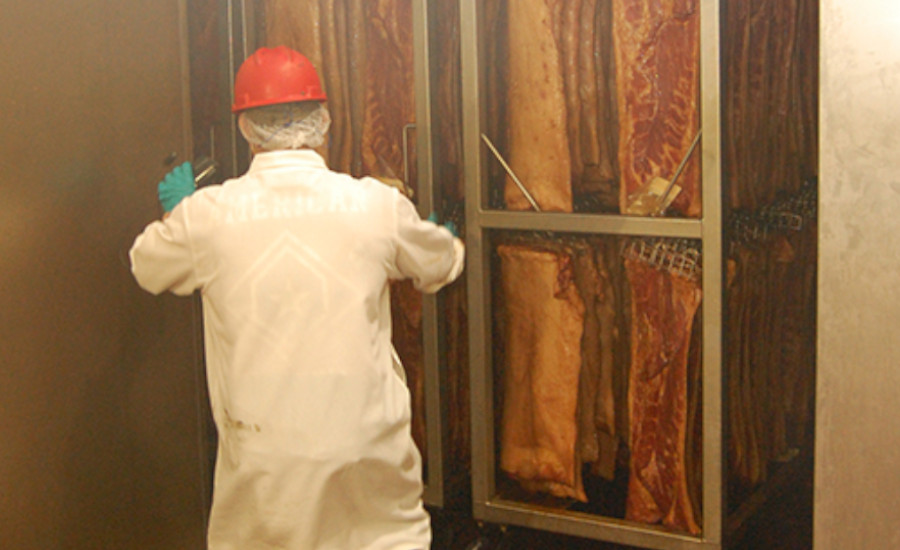 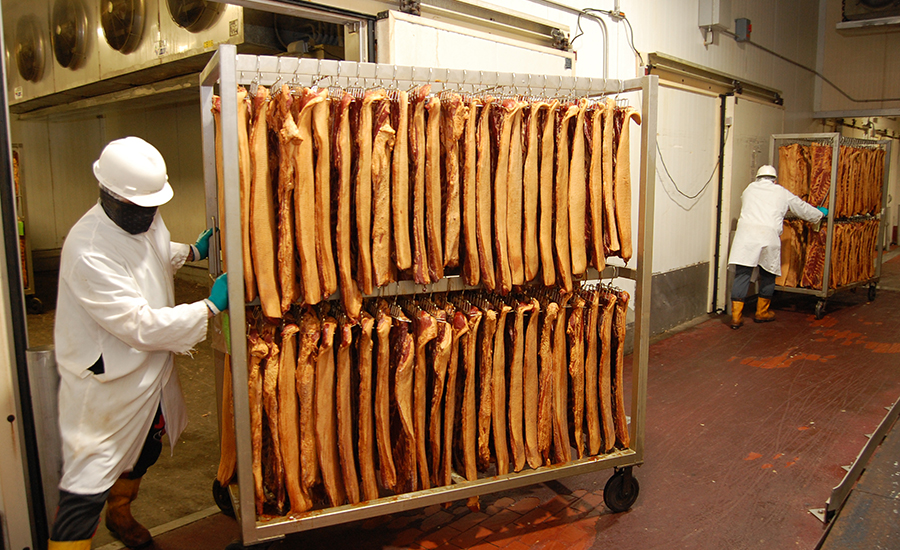 The monstrous smokehouse in the Denison, Iowa, plant holds 28 trees of product, equivalent to one truckload of bellies and the amount of trees they can fit in one blast cell.


“It’s not usually the case in other plant expansions that, when you expand a plant, you automatically have increased demand at another one,” he adds. Yet, the growth of Denison, both yesterday and tomorrow, isn’t tied specifically to Monogram Foods. The Denison plant has made a name for itself over the years with a variety of customers in the segment.

“[Bacon] continues to grow, and it does not appear to have an end in sight,” Schledwitz says. “We're very fortunate to have aligned with some customers that are also growing, but the combination of being in the right category with the right customers is a recipe for success.”

Hansen says the plant’s reputation has spurred success since it shifted to bacon processing in the early 2010s (the plant had housed a wide variety of processing operations since it was built in the 1970s as a beef plant).

“The consistency of our operations has been very solid, and our color has always been good and consistent,” he explains. “We limited the formulas we would run, fine-tuned them, and reached a high level of consistency.”

Eric Kohler, general manager of Monogram Quality Foods, believes that QFP’s approach to its partnerships added to the reputation that plant developed.

“We listened, we were careful on changes, and we didn't move too fast, because we didn't want to upset the applecart,” Kohler says. “We got very consistent on the processes, but there are improvements that can still be made, and with the resources of Monogram Foods, we can pursue them in a very structured way.” 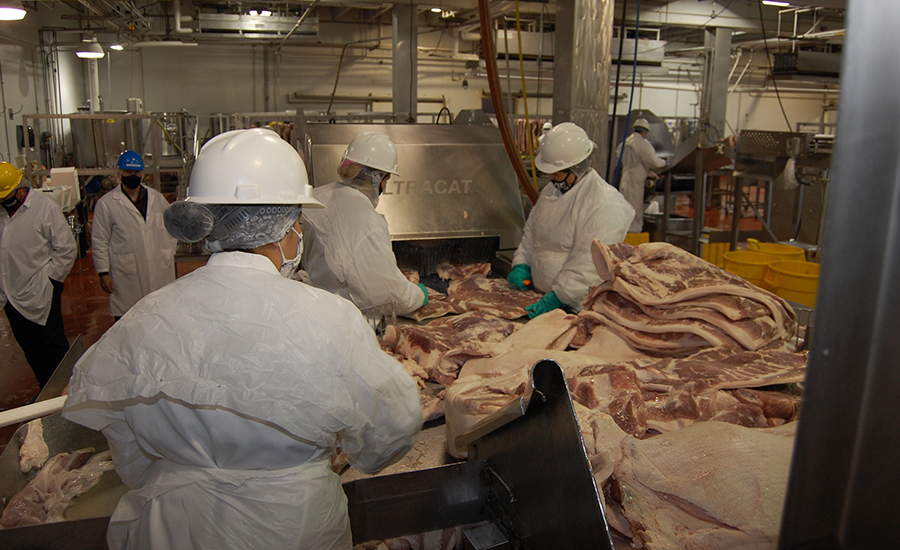 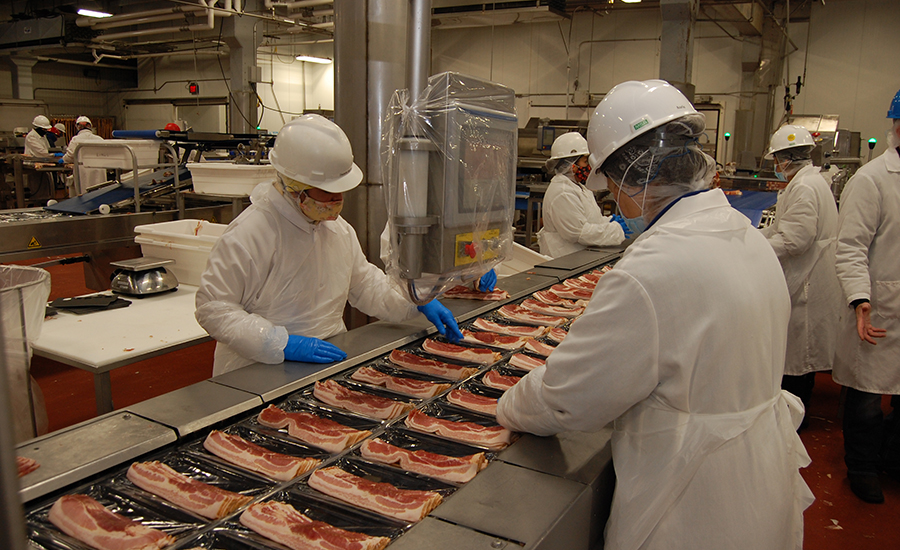 The Monogram team expects investment to ramp up for the Iowa facilities, but it’s not as though QFP wasn’t willing to invest before the acquisition. In fact, in January 2020, the plant finished a significant and unique installation of a monstrous smokehouse capable of holding 28 trees of pork bellies — equivalent to the size of a large truckload and the number of trees Denison could hold at one time in the blast freezer. According to Kohler, the team discussed a variety of options for size and number of new smokehouses but kept finding concerns over consistency from batch to batch.

“Rather than having individual, different cook jobs [on product coming in the same shipment], we wanted to take variation out of the process. So, instead of having four smokehouses handle smaller batches from the same supply, with all the variables, we built one large smokehouse to handle the entire batch,” he says. “Although the changeover is longer, there are fewer changeovers and less handling of the trees each time.”

Continuous improvement of processes and lines will be the norm moving forward, says Kent Kring, senior vice president of Operations for Monogram Foods, but innovation doesn’t always come in the form of changing out equipment.

“In this case, innovation revolves around understanding what both plants can bring to the table and how to maximize that,” he explains. “For example, changes made to the steps taken here in Denison for trimming will help produce a better product at a lower cost and higher quality in Harlan.”

Of course, the challenges around attracting and retaining employees in today’s job market mean Monogram Foods has its eyes on automation at both the Denison and Harlan plants, Kohler says.

“We’ve been complimented over the years by almost every customer about the quality of our product, but there are a lot of manual labor jobs with repetition motion on the floor that can be automated,” he says. “So we have to automate processes we can — but without hurting the quality of the product.”

For a company like Monogram Foods that is willing to invest to grow, maintaining the high quality of the wide variety of products it offers is crucial. Schledwitz believes the Denison and Harlan plants are poised to blast through the challenges that still linger from COVID-19 and any other issues that arise.

“I am so proud of what Denison and Harlan did, not only integrating this last year, but in the midst of COVID, like every other plant in this country, they were facing their challenges with hiring people,” he says.

Schledwitz and the leadership at Monogram Foods expect to have much more to be proud of in coming years, starting with its second acquisition in six months (announced at presstime) — this one in Dickson, Tenn.

Notice has been served to industry: The Monogram beast has been awakened and is back on patrol for more aggressive growth opportunities.