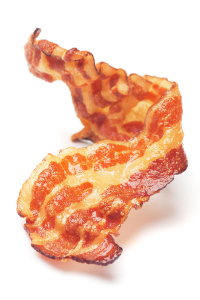 It has been said that bacon is meat candy. And this past year, restaurants have pushed the point by literally treating bacon as a sweet garnish for and in sundaes, milkshakes and coffee.

Yet overall, bacon continues to confound expectations by holding steady in a year of higher prices and a still fragile economy.

After much attention was given to rising pork belly (and corn prices) last year — with some media outlets hypothesizing that the average price per pound of bacon could reach as high as $6 —the average price settled on a more modest, though still high, $4.53 per pound, with the average price of a package of bacon at $4.01, reported SymphonyIRI Group, a Chicago-based market-research firm.

In fact, although last year’s prices may have temporarily hurt bacon sales at grocery outlets, they certainly bounced back by year’s end. According to SymphonyIRI Group data, bacon dollar sales at retail increased 4.7 percent to $2.5 billion and unit sales only decreased 1.1 percent to 627 million pounds, as of June 10, 2012.

Moreover, this summer’s pork belly prices were down about 10 percent, noted Slate.com. So consumers may once again be more inclined to try new product combinations.

Roughly 554 million pounds of fixed-weight bacon was moved through retail in the 52-week period ending on June 10, 2012, a decrease of 1.1 percent, reported SymphonyIRI Group.

“Bacon is still the condiment of choice to increase flavor,” says Patrick Fleming, director of retail marketing for the National Pork Board, based in Des Moines, Iowa. “Its volume was down this year because of pricing, but once prices softened, bacon was right back at [driving incremental sales]. Everyone loves it.”

Foodservice operators — from fast-food to sit-down restaurants — are certainly not lacking in creativity with bacon options.

This summer, Burger King launched a Bacon Sundae on its limited summer menu. Soft-serve ice cream was paired with caramel, chocolate and bacon pieces on top. While the reviews have been mixed, with some consumers appreciating its over-the-top flavors and others finding them to be more of a gimmick than a plus, the sweet-and-savory combination drew consumer attention and fits into recent trends of bacon as a flavor enhancement to sweet dishes.

Just this spring, Jack in the Box sold a 773-calorie bacon milkshake as part of its “Marry Bacon” campaign. The unlikely combination once again piqued consumer interest and caused Jack in the Box to sell out quickly, due to its use of bacon syrup, not real bacon, to manufacture the taste of bacon. These combos follow Denny’s bacon sundae which debuted in April 2011.

“Bacon is one of the most versatile products in the market today,” notes Joe Pawlak, vice president, Technomic Inc., a Chicago-based food industry research and consulting firm. “It can be used as a standalone item or in innovative ways for breakfast, lunch, dinner, snacks and now desserts. Very few products can do the same.”

“Consumers still enjoy bacon and will try it in new ways,” says Nielsen. “But the bacon trend is maturing, and it’s less of a trend now than just part of the landscape.”

Because consumers are familiar with and love bacon, it can provide a way for foodservice operators to experiment with their menu offerings and up-charge items in the process.

“There is a role for bacon to be a unique item that can add complexity to flavor profiles, such as with sandwiches, wraps and pasta,” says Pawlak. “It is broadening its appeal on the menu to every area, which we haven’t seen before.”

He notes that there is an opportunity to add bacon to Mexican and Italian foods that haven’t used it before as an ingredient to provide a new flavor twist.

“Flavored and peppered bacons are growing, so they will expand bacon into more applications,” says Pawlak. Nielsen points to TacoTime’s new Cheesy Bacon Quesadilla, available for a limited time, as another example of this new trend.

Indeed, the National Restaurant Association’s “What’s Hot in 2012” survey of chefs identified artisan/specialty bacon as a trend, with 65 percent of the nearly 1,800 chefs noting it as a trend.

Usually, consumers think of bacon as a staple of breakfast menus. According to Mintel International’s “Breakfast Restaurant Trends – US February 2012” report, bacon remains popular at breakfast but performs slightly better with men (37 percent) than women (30 percent).

Summer is usually a popular time for bacon, as it is a natural addition to grilled burgers and chicken, sandwiches and more leisurely weekend breakfasts, notes Fleming.

But he points out that restaurants and grocery stores have been promoting bacon heavily for the past two to three years despite higher prices, and with lower prices the crispy strips are trending up again on restaurant menus.

“Bacon did well during the recession because it’s so flexible and serves many purposes,” he says. “Consumers are comfortable having it in their fridges.”

For years, bacon slices were getting thinner but thick-cut strips continue to grow in popularity, he says. “For example, Wendy’s recently added thicker and more flavorful bacon to its menu,” he says. “Bacon is an indulgence, and adds a lot of flavor for little money.”

This spring, Oscar Mayer launched Butcher Thick Cut Bacon, a thicker cut of bacon that is hand-trimmed and smoked with natural hardwoods for up to 14 hours. It comes in two smoked varieties: Applewood or Hickory.

Fleming points out that ready-to-eat bacon is still growing as a convenient option for consumers who don’t want the mess of making bacon at home.

As pork belly prices stabilize after years of volatility, bacon producers see an opportunity to experiment with line extensions and new flavors.

Fresh Mark, for one, has offered line extensions this year with center-cut, extra-thick slices and new stronger flavors such as Applewood. It also took the opportunity to upgrade its packaging.

“The current pricing stability gives us some breathing room to launch new products: We don’t have the buying frenzy of the past when prices were so low, [nor] the consumer reticence from when prices were high,” says Kristin Clemmer, director of marketplace strategy and communications, Fresh Mark Inc., which manufactures Sugardale Foods and Superior’s Brand Meats.

Fresh Mark’s new packaging comes in larger sizes of 24 to 40 ounces for the thicker cuts, and has new attractive, upscale graphics.

“Consumers still love bacon, so putting bacon on a sandwich is not a novelty today, but a necessity,” says Clemmer, noting that bacon is a mainstay ingredient for daily American cooking now.

Smithfield Foods Inc. is another company that has launched new packaging this year. In fact, it’s the first bacon manufacturer to offer portion-controlled packaging with its PouchPack.

According to Will Brunt, vice president of marketing for Smithfield, the company engaged in new consumer research to better understand bacon consumption trends and learned that 75 percent of people who purchased a package of bacon didn’t wind up using it all before it went bad.

“We saw a market for those who wanted to use some portions but not all at once,” says Brunt. Based on this feedback and other consumer suggestions on package features, Smithfield provided two perforated pouches in its package, a window on the front of each pouch, and peel tabs for easy access.

“Our research showed that the average bacon user ate two slices at a sitting with three other people, so each pouch has a minimum of six slices for an average gathering,” adds Brunt.

The material itself is a firm plastic so it can sit up on the shelf and be easy for retailers to merchandize. The entire research, product development and machinery acquisition process for the new packaging materials took one and a half years.

“Overall, when people see our new package and understand it, the response has been very positive and they purchase it again,” he says. “The new packaging isn’t for everyone, but is mainly for smaller households.”

Brunt notes that bacon has been sold in an L-board format for so long that it can be hard for consumers to try something new.

“We’re constantly looking to increase our ‘peelability’ and feedback to tweak our packages,” he says. “There was definitely a need gap for this product.”

Going back to basics

So, what can foodservice operators and bacon manufacturers do to top themselves? Perhaps, go back to the basics.

Nielsen points out that charcuterie — the centuries-old European art of preserving or curing meat — is becoming popular again. Products like pancetta and guanciale (Italian cured meat from pig jowls) could be seen on more pizzas and pastas.

It should be noted that these products are prone to pathogen contamination if the temperature and salt added are not correct, so most cities have stringent health-code rules regarding charcuterie. She also suggests that chefs will continue to play with smoked bacon.

“Another newsworthy way to stand apart is for restaurants to use humanely treated pork, similar to Chipotle,” she says. “We’re already seeing large [restaurant chains] talk about getting rid of gestation crates. Consumers should look for and prod companies into offering more humanely raised product.”

McDonald’s Corp. and Wendy’s Co., and pork producers Smithfield Foods and Hormel Foods Corp. are among the big-name companies that have announced plans to phase out gestation crates.

2016 Bacon Report: The power of bacon