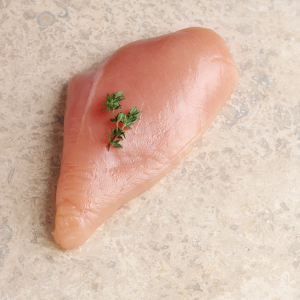 Consider all the steps it takes for a live animal to become a piece of meat sold at a supermarket or a meal served at a restaurant. Between the field, the transportation, the slaughterhouse, the processing and the further processing, there are dozens of places where a foreign object can become embedded in the meat tissue. It could be a piece of bone broken off during the first processes, or a stray bit of metal broken off from one of the machines. When it happens, it often requires a metal detector or an X-ray machine to keep the contaminated product from leaving the plant.

X-ray detection systems discriminate between bone and meat based on the density of the material, so a piece of bone which is denser than the meat becomes visible on the screen. The system is not infallible, though, points out Doug Britton, program manager of the Agricultural Technology Research Program at Georgia Tech University in Atlanta.

“Bones in chicken have similar densities of the meat tissue,” he explains. “Unfortinately, with some of the bones – in particular fan bones – the discrimination is very difficult because the density of the bone and tissue are very similar.”

Another problem is that some systems are unable to detect small pieces of bone.

“When we chomp down on a small, 2-by-3 millimeter piece of bone in a chicken breast, we feel it,” Britton says. “But X-ray systems tend to have a little difficulty detecting down to that scale”

He adds that the latest X-ray technologies have improved on small bone detection significantly, allowing processors to catch much smaller bone pieces than they were previously able.

The most common method for X-ray detection is to have the product spread out on a conveyor, although some methods use a diaphragm or piston pump to pipe more fluid products through an X-ray system. Georgia Tech has looked into several other methods for detecting bone chips. One approach was to look at the carcass instead of the butterflied meat to see if bones are missing. The inspection used infrared light instead of X-rays.

“We have had some success and have done a reasonable job of detecting the fan bones as well as other things like broken clavicle bones,” Britton says.

Another possible technology, though it's much further from being a commercial product, is the use of ultrasonics. The problem with that technology is air entrapment in ground product, which throws off the results. However, Britton says the technology has possibilities for detecting calcified materials in meat.

The application of X-ray systems in a processing plant depends largely on the type of product. If a company is a raw producer, Britton advises placing the X-ray machines as close to the deboning station as possible.

“You'd like to know as soon as possible if you're having an issue with a particular piece of deboning equipment, or if there are some employees on a particular line that are having a challenge deboning the meat successfully without getting bone chips,” he says. “That's really where you can do something about it, like recalibrate a piece of equipment or give the workers additional training or a break – something that can help improve that productivity.”

If a company is a further processor that is bringing in meat from outside sources, the ideal spot for an X-ray machine is at the very beginning of the process, so that the incoming meat can be pre-screened. That is especially important, Britton notes, if a company is getting its meat on the open market and not from a trusted supplier. He knows of several companies that pre-screen all incoming material and give each supplier a grade, with the pay based off of that grade.

“Often what happens, if you're selling on the commodity market, maybe you're not as careful with your bone detection processes,” he says. “But if your customer, the further processor, is going to give you a score and pay you based on the amount of bone that they find, that might make you pay more attention to what you're delivering.”

Metal detection, on the other hand, is best performed right before the product goes into packaging, “as close to the end of the process as you can possibly put it, so nothing else can be introduced in the process along the way,” Britton says.

Metal detection shares some of the sale issues as X-ray detection – i.e. the size of the contaminant. Orientation is also an problem, as a thin piece of wire embedded in a piece of meat may not be detected depending on how it is positioned within the meat. Metal detectors require a good bit of calibration, Britton notes, to make sure they are staying in specification and that they are detecting to the small sizes processors require.

Of course, there are some objects that cannot be easily detected by either an X-ray system or a metal detector. In this year alone, there have been recalls due to pieces of cardboard, plastic, pens, conveyor belts, gloves and gaskets being found in the meat product.

Britton says that the Georgia Tech lab had at one point experimented with imaging systems on certain types of meat to detect foreign objects in food.

“In those cases, we recommended that [processors] use all blue plastics,” he says. “Use blue belt liners, use blue film for totes, use blue everywhere they could, because it provided pretty good discrimination between typical protein products like beef, chicken and turkey.”

The future of foodservice

The Growth of the Halal Market