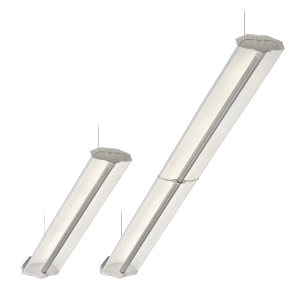 “The Cree CS Series luminaire is unlike any other suspended linear lighting on the market today,” said Jason D. Curtis, principal, Cardinal Gibbons High School. “We researched the LED market extensively and only Cree offered a solution that delivered high-quality lighting and easy payback. Since the new CS Series is designed for 75,000 hours of life, Cardinal Gibbons High School can benefit from ongoing operational savings due to decreased maintenance and lower energy consumption compared to the linear fluorescents we replaced.”

The CS Series is designed for low maintenance and long life – lasting up to three to four times longer than standard fluorescents and enhancing the appearance of any space. The new luminaire introduces a deceptively simple yet highly efficient optical design approach that integrates an upward-facing LED light strip with Cree TrueWhite Technology and an ultra-lightweight upper reflector, featuring all-new Cree MicroMixing Optics for precise optic control. The CS Series comes standard with 0-10V dimming control to five percent and features a seven year warranty.

“Everything we do at Cree is focused on accelerating LED acceptance and the latest CS Series innovation delivers on our promise and truly provides a no-compromise alternative to fluorescent lighting,” Elien continued. “Businesses no longer have to choose between color quality and savings and no longer have to suffer the poor performance, toxic mercury and hazardous disposal expense inherent with fluorescent lighting. The color quality and visual impact offered by Cree CS Series makes it the ideal solution for large retailers and industrial users.”

New, innovative Cree MicroMixing Optics are formed from thousands of tiny impressions imprinted on the state-of-the-art highly reflective polymer material. Unlike direct-view LED solutions, this multi-faceted pattern blends and softens the intense light and redirects it with precise control and color mixing. The result is beautifully balanced white light with optimal distribution within the desired area.

The Cree CS Series LED Linear Luminaires are made in the United States and sold through Cree lighting sales channels with sample quantities targeted for availability in May 2012. For additional information, please visit www.cree.com/csseries. The CS Series will also be demonstrated at Cree’s lighting booth #3008 at Lightfair International in Las Vegas, May 9-11.

Cree is leading the LED lighting revolution and making energy-wasting traditional lighting technologies obsolete through the use of energy-efficient, mercury-free LED lighting. Cree is a market-leading innovator of lighting-class LEDs, LED lighting, and semiconductor products for power and radio-frequency (RF) applications.