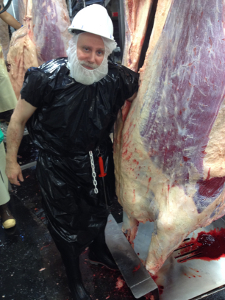 Anyone who has ever had to follow a special diet—for medical reasons, for weight loss or otherwise—knows how restrictive it can seem. But if you think following a low-sodium protocol can limit your dining options, that’s only a fraction of what Jewish people who follow the kashrut laws endure.

In addition to having a list of foods that are prohibited, preparation methods are specific. Utensils used to cook meat products must be kept separate from those used to prepare dairy. Beef can only come from animals that have never been sick and then are harvested using the kosher methods.

When he heard he could source Certified Angus Beef® (CAB®) brand Kosher, he saw that as a way to continue to set his restaurants apart.

“I’ve been in the meat business my whole life. When I saw the piece of meat I knew it was different,” he says. “It’s like when a diamond guy looks at a diamond.”

The beef must meet the 10 carcass specifications for the CAB brand, a feat that’s only achieved by about 22% of all Angus-type cattle. Beyond that, it must qualify for CAB Natural, from cattle never given hormones, antibiotics or anything but a vegetarian diet.

“The cattle that we’re buying are the premium, the best of the best that’s out there in terms of cattle, and we pay a large premium for them,” says Ilan Parente, with Golden West Food Group, which is producing the brand’s kosher extension at its Vernon, Calif., packing plant. “That’s why it all fit very well with CAB.”

As a kosher consumer himself, Parente takes a personal interest in producing the highest quality beef that appeals to those of his faith.

The process starts back on the ranch, he notes.

“We have two guys who go out to check the husbandry conditions on the farm, and we’ll make recommendations,” Parente says. They prefer metal or cement bunks, low-stress weaning programs and Angus breeding. They are also buying all-natural cattle that have never received antibiotics or implants.

The reason is simple: there are added steps, and costs, associated with kosher production. The more cattle in a group that end up with that certification, the better.

“First, the cattle are ritually slaughtered, meaning that a knife is used,” says Parente, comparing that to the “knock box” used in most packing plants. The person at the helm is a rabbi with a minimum of eight years experience. That knife has already been checked, and its sharpness approved by a separate rabbi.

“From there it goes through the dress process as you would see anywhere else,” he says, “except when it comes to splitting the brisket.”

Instead, another rabbi is there and inspects the chest cavity to be sure there are no signs that the animal has had so much as a cough during its lifetime. That is also the reason that they don’t want wooden bunks, to cut down on possible splinters and internal injury related to that.

“If that lung is free of adhesions, then that animal will qualify for kosher,” Parente says. “Kashering” the meat entails deveining, soaking and salting it to be sure there is no blood left.

“We employ two rabbis for the slaughter process, but then we have three additional rabbis on the floor who monitor the process, making sure that the carcass is tagged properly, then marked and shifted in the cooler properly,” he says.

The process slows down the “chain speed,” which is why it takes both a specialty packer and assurance that a high number of the cattle are going to make it into the program. Anywhere from 30% to 70% of any group gets accepted and receives the Orthodox Union

certification for Glatt Kosher, and that’s why Parente and his crew work hard to develop relationships with specific commercial Angus cattlemen, and try to become repeat buyers.

“The beef is consistently higher quality,” Parente says. Indeed, while the industry average for Prime is around 3%, Golden West boasts a 30% to 40% rate. That 22% nationwide average CAB acceptance rate is closer to 80% CAB at their plant.

Back in New York, Allaham says the exclusive product is worth the extra work and money.

“It’s true I pay more, but the quality—the meat is totally different,” he says, noting that his most popular beef dishes are simply unadulterated steaks. “A good piece of meat, you don’t need to do much to it.”

They make their own olive oil, add a little salt and pepper and they’re well on their way to pleasing some of the city’s elite diners.

That end result benefits everybody in the high-quality beef production chain, from ranchers to processors to restaurateurs.