A kid’s book for carnivores 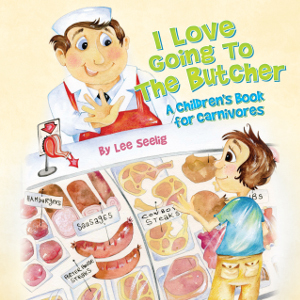 A child’s worldview can be shaped my many things, both large and small. For instance, reading them bedtimes stories can foster a love of books that can carry over into adulthood. Thanks to a new book from Lee Seelig, children now can gain an early appreciation for their local butcher shop.

Seelig’s new book, I Love Going to the Butcher: A Children’s Story for Carnivores, is close to home for him. As a father of Zoe, 5, and Jonah, 3-1/2, he has read more than his share of children’s books. As president of Main Street Wholesale Meats, he wants to help spread a positive message about the meat industry and the people who work in it.

“I thought it could be something that, in my little way, could try to promote the industry,” he says. “I just through that the idea of promoting old-school butcher shops would be fun. There’s no voice out there really for that.

“If you read to kids when they’re young, it could help to normalize that idea, so as they get older, it’s in the back of their heads and make them more likely to feel good about going into a butcher shop, as opposed to some of the stuff out there now that’s just so negative against the industry,” he adds.

I Love Going to the Butcher describes a fun trip a child makes to get meat for a family BBQ. The butcher in the story, like Seelig’s own company, has full, mouthwatering meat cases, and the friendly butcher offers free slices of cheese or bologna to his young customers. The butcher is called an artist and, like the real-world people who work for Main Street, cuts the meat just how his customers want it.

“Our case is full, but if you want a porterhouse that’s twice as thick, we’ll cut you more. That’s why one of the pages says, ‘He’ll cut the steaks just the way we like it,’” Seelig says of his company. “We’ll do whatever our customers want us to do.”

Seelig wrote the text fairly quickly. To publish it, he went through CreateSpace, an Amazon-owned company that provides the tools and services that authors can use to self-publish their books. The company gave Seelig a choice of illustrators, and he ended up with one who provided colorful, cartoon-like pictures that perfectly complement the text.

The book is available for sale through Amazon.com, and Seelig is working to promote the book through his business, as well as a network of other butchers across the country. He jokes that it makes a perfect holiday present for vegetarians.

What do his own children think about it? At first, daughter Zoe was upset that there were no princesses in the story. However, Seelig did dedicate the book to them, so they love seeing their names in print.

“We’re calling it the Zoe-Jonah book now,” says. “They’re into the idea of reading, so they were positive. But they were psyched to see their names in there.”

Independent Processor and Main Street Wholesale Meats are giving away three autographed copies of I Love Going to the Butcher. To enter, go to www.provisioneronline.com/butchercontest.