Godshall’s Quality Meats is taking steps to ensure its future is as  successful as its present.

Visit the historical district of Philadelphia, and it’s not uncommon to see tourists and business people walking down the same streets as re-enactors dressed in colonial garb. In the Pennsylvania Dutch region, late-model cars and trucks often share the roads with Amish horses and buggies. It’s fitting for the past and present to mix in an area that’s steeped in as much history as Pennsylvania.

Godshall’s Quality Meats is an important part of the region’s meat-processing history. The company has been family owned and operated since 1945, and some of its brands date back to the 1800s. Inside its facilities in Telford and Lebanon, Pa., however, there is no room for dwelling on the past. With state-of-the-art ovens, smokehouses and other processing equipment, Godshall’s is working hard to sustain the growth that has transformed it from a small meat seller to a regional powerhouse with more than $100 million in annual sales. With investments into sustainability and new construction projects, the company’s management is ensuring its future is just as successful.

A look at Godshall’s continually expanding footprint shows how the company is modernizing and expanding. The Telford facility is located on the family property, but the original house has been converted into offices for management. President Mark Godshall’s office used to be the living room — he says he can still remember where in his office the family Christmas tree used to go. The red barn is still standing, but instead of housing livestock or farming equipment, it houses computers that track water temperature, refrigerant line pressure and smokehouse settings.

Mark Godshall and his partner, Floyd Kratz, purchased the company in 1991, following Godshall’s father’s retirement. At the time, the company sold products in several farmers’ markets throughout the city and supplied to restaurants and retirement communities.

“We do none of that business anymore,” Godshall says. “We could really see the world changing, so we transitioned into fully into manufacturing. We peeled off all the other business and never looked back. Manufacturing has been terrific.”

Godshall’s manufactures a variety of fully cooked items, including snack sticks, sausages and turkey breasts, but its specialty is turkey bacon. It has two facilities, in Telford and Lebanon, Pa. The Telford plant produces whole-muscle and chopped and formed products, while sausages and ground products are produced in Lebanon. Both plants make turkey bacon, and the Lebanon location has the ovens needed to produce pre-cooked bacon. 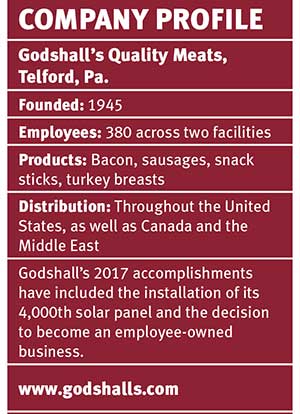 Godshall’s sells products across the United States, as well as Canada. It also has a growing Halal business that exports product to several countries in the Middle East. Kratz, the senior vice president, oversees that portion of the business.

Turkey bacon can be a tricky item to produce. It has an audience among consumers who like the product for its leanness or who don’t eat pork products. However, the taste of turkey bacon often doesn’t compare to the traditional version. Godshall’s has found a way to eliminate that obstacle by producing a chopped and formed turkey bacon made out of thigh meat, creating a better eating experience. Ron Godshall, chief operating officer and Mark’s cousin, notes that a quality end product starts with sourcing quality raw materials.

Godshall’s expertise in bacon has led the company into beef and chicken bacon, as well as pre-cooked turkey bacon. The latter product required specialized equipment, so the company installed a 50-foot-long impingement oven into its Lebanon plant after building an addition to house the equipment. Mark Godshall notes that the product came with some risk, as a fully cooked turkey bacon had seldom hit the store shelves.

“When we built the addition in the back of the warehouse, we did something we never did before – we had a failure plan,” he recalls. “If this pre-cooked turkey bacon didn’t work, we were going to pull the ovens out and use the area as a warehouse. A year and a half later, we put the second oven in, and there was no failure plan that time. That has been just a wonderful growth item for us.”

Godshall’s Quality Meats has frequently found itself at the leading edge of a growing trend. For instance, it was producing clean-label items for a major retailer at the start of the demand for those products. Its success with that customer led to more and more opportunities with private label customers who wanted to get involved in that niche.

“We got started in that because nobody else was doing it, and we’ve gone through some really wrong paths because of that,” Ron Godshall says.

“But obviously, we’ve had more successes than failures,” Mark adds. “We’re always getting people reaching out to us with new projects.”

New construction or renovation is a common process at Godshall’s, as the company tries to stay ahead of its production demands. At one point last year, it had five different construction projects taking place at once. Currently, the amount of construction is a more manageable two projects – but they are substantial ones.

One of the projects is a new research & design facility, located about a mile from the Telford plant. It will be completed by the end of the year and will allow the company to produce test batches of practically any type of product imaginable, as well as run shelf life analysis. Once the lab is completed, team members won’t need to squeeze in test batches in between production runs anymore.

The second project is the largest construction project that Godshall’s has ever undertaken. It is adding an addition onto its Lebanon facility, which used to belong to the Daniel Weaver Co. Godshall’s acquired the company and its facility – which dates back to 1885 – in 2005 and has worked to maintain the building since. The new addition is designed to move all production out of the old section and into a modern facility, with enough room to add more packaging lines as the need arises.

The Lebanon location, like Telford, feature rows of solar panels – the company installed its 4,000th solar panel earlier this year. The commitment to solar energy is part of Godshall’s sustainability program, which includes a conversion from diesel fuel to natural gas and a landfill-free status. Its recycling program now pays for any remaining garbage disposal.

A shift toward sustainable practices, like any change in corporate culture, requires full commitment from the entire company. Randy Godshall, vice president of manufacturing, says that the company’s employees make the team effort easy.

“We have a couple of supervisors that are in charge of these programs. They’ll hold meetings throughout the whole company with each of their departments to get the whole team involved,” he explains.

“Solar is just one part of our sustainable business structure. The government promotes it, they’re willing to put a tax credit behind it, so when you look at it from tax planning, it makes a lot of sense. You write off a solar panel over six-and-a-half or seven years, and the panels we use have a guaranteed service life of 25 years. From a long-term perspective, and we all intend to be here a long time, it makes sense,” he says.

As part of that commitment to the future, the Godshall cousins and Kratz made the decision this year to become an employee-owned business. An ESOP (employee stock ownership plan) allows owners to sell a portion of their shares to employees, giving them a vested interest in the business. Mark Godshall says that, given the company’s growth, the ESOP may become more lucrative than its 401K plan.

The management team was presented with the ESOP idea while undergoing succession planning, and it intrigued them. Mark Godshall has two children in the business, but they are not currently in management roles. He points out that many among his senior management teams in Telford and Lebanon had lost previous jobs as a result of their companies being acquired. This decision gives them assurances of long-term stability for the future.

“We have worked with these folks forever, and we have a great deal of respect and admiration for them. The idea of saying, ‘I got my check, and good luck guys,’ that’s not right,” he says.

Not that anyone is planning on leaving or selling the business. The goal of the ESOP was to allow the owners to take some of their own money off of the table while at the same time thanking those people who have contributed to Godshall’s success.

“The lawyers were saying, ‘When you do an ESOP, it will empower your employees, and they’ll work harder,’” Mark recalls. “Our people already give 110% now. I don’t know if they have 115%, and I don’t care about that. Oh sure, we’d all like to see things improve, but it’s all about rewarding them for the work they’ve done to get the company here.”

Godshall’s future plans look to ensure that the company’s growth continues well into the future. The addition of the R&D lab will keep new products and new customers entering into production. Yes, more construction projects are expected as well. The company was able to purchase more land in Lebanon County and is considering its options. A 2016 fire at the Lebanon plant forced Godshall’s to turn a warehouse into a processing plant, and the company is looking at ways to compensate for that change in plans.

“We try to be looking two construction projects ahead, because they kind of sneak up on you,” Mark says. “We’ve done just-in-time construction before, and it doesn’t work nearly as well as well-planned-out construction.”