This website requires certain cookies to work and uses other cookies to help you have the best experience. By visiting this website, certain cookies have already been set, which you may delete and block. By closing this message or continuing to use our site, you agree to the use of cookies. Visit our updated privacy and cookie policy to learn more.
Home » U.S. Poultry Market: The price is right
Meat and Poultry Industry NewsChicken
Business Strategies

A moderating price environment for feed grains, particularly as compared to price levels from a decade ago, has provided protein companies with ample incentive to expand production over the last few years.  While all three major protein categories — chicken, beef and pork — have interesting narratives heading toward the traditionally strong summer selling season, none is more compelling than the broiler industry. The fact that chicken overtook beef as the most consumed protein in the U.S. nearly 25 years ago is now largely taken for granted in a sector that has become almost entirely supply driven. Yearly, incremental growth has seemingly become an afterthought, and American consumers have yet to exhibit any form of real resistance to this continual expansion.

Historically, the explosive growth of chicken was undoubtedly linked to relative prices between proteins, as chicken was commonly a cheaper alternative than beef and pork substitutes. The resiliency of chicken as demonstrated by a consumer focus on healthy eating, product innovation and expanded fast food menus, however, has clearly made pricing less of a factor than it once was. In fact, most pork products are now cheaper than chicken in retail markets, but this has not driven domestic consumption materially higher. Rather, the moderate expansion within the domestic pork industry has been almost entirely driven by foreign demand. For the last decade, when feed price inflation and overproduction caused two severe down cycles within the chicken sector, it would seem broiler companies suddenly became immune to the repercussions of supply expansion. 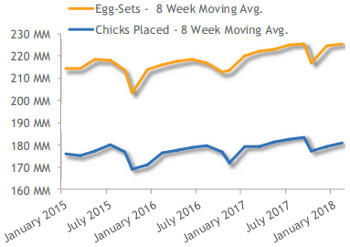 This summer will be yet another test for how much chicken the domestic market can absorb. It appears the upward limits may be challenged. The chart to the right provides two key leading indicators of future chicken supplies: egg sets and chick placements. While seasonality certainly exists, the three-year trend line is clearly on an upswing, and current data supports a minimum supply expansion of 1.8 percent in 2018. This projection is likely on the low end as higher bird weights could easily flex this number to as much as 2.5 percent for the year. As a result, it seems likely wholesale chicken prices, particularly breast meat and wings, will lag the prior year as producers work to ensure adequate product velocity to avoid stockpiling.

Clearly the favorable feed price environment will continue to benefit chicken suppliers, which are now enjoying break-even levels that are largely manageable, even in the face of price declines. Perhaps more important, relative protein prices may not have the same impact they once did. Considering that pork expansion could reach as high as 5 percent for the year and that boxed beef prices are now 23 percent below the record highs of 2014, competing meats could otherwise place an additional damper on the outlook for chicken. The chicken industry may still face obstacles, such as the impact the next inevitable down cycle will have on processors, but at least for now, some external factors that once affected the industry have been minimized. NP

State of the Meat and Poultry Industry 2017: Chicken

State of the Meat and Poultry Industry 2017: Chicken

Calling all Nashville Beefitarians: Burgers and Beats Contest is right around the corner