There’s nothing fishy about seafood’s popularity. Americans are sampling more ethnic seafood dishes, poke, raw fish and snacks, and finding fish to be a versatile partner with street foods and spices. This year, bowls, seafood as a snack, frozen pre-seasoned seafood, multicultural flavors and sustainability will also continue as trends, according to the Seafood Nutrition Partnership.

Put simply: More Americans are eating fish. They consumed the highest U.S. per capita consumption of seafood in a decade, according to the latest figures from the National Oceanic Atmospheric Administration’s Fisheries of the United States 2017. Americans ate 16 pounds of fish and shellfish per capita in 2017, an increase of 1.1 pounds from 2016, says the Alaska Seafood Marketing Institute (ASMI) domestic marketing team.

“Sixty-five percent of consumers eat seafood, at least occasionally (once every 90 days) — this is stronger with those ages 35 and up (71 percent) versus 18- to 34-year olds (56 percent),” according to Technomic’s Center of the Plate: Seafood and Vegetarian Consumer Trend Report, says Lizzy Freier, managing editor at Technomic, a Winsight Company in Chicago.

And there’s still plenty of room for growth. Seafood mentions on menus are actually down 4 percent in the past five years, according to Technomic’s Menu platform, powered by Ignite. “However, where we’re seeing growth of seafood on menus is with add-ons (up 26.9 percent), sides (up 7.7 percent) and kids’ menus (up 12.9 percent),” Freier says.

Generally, most Americans are still a bit less comfortable with seafood than with other forms of animal protein.

“That said, some trends have certainly helped drive increased interest in seafood,” says Maeve Webster, president of Menu Matters, based in Arlington, Vt. “Sushi was the first big trend to increase seafood consumption. Poke is the more recent iteration of that general idea and continues to do well on menus with tuna tartare also growing. Of all seafood types, salmon does best.”

Salmon’s growth year over year continues to rise with no signs of slowing. “Over 50 percent of the patrons to U.S. restaurants consider salmon when they are ordering seafood at a restaurant,” according to Kantar/ TNS, Norwegian Seafood Council’s Seafood Consumer Insight 2017, says Egil Sundheim, U.S. director, Norwegian Seafood Council, based in Boston. “Consumers are looking for sustainable seafood with a known origin. And additional species, such as steelhead trout, cod and haddock, are expected to have stellar growth over the next five years.”

But it doesn’t stop there. Species such as wolfish and other lesser-known fish are poised to have a dramatic impact on menus as well as grocery stores, says Sundheim.

Octopus is growing in popularity but remains available on only a limited number of menus (about 2 percent), Webster says.

“Seafood is poised for growth in both (foodservice and retail) channels: frozen aisles have an enhanced convenience factor and the fresh counter has knowledge,” Sundheim says. “Fish mongers are constantly being updated with all of the information customers are seeking — farmed versus Wild, to name one. They provide details on cooking techniques/recipes, serve as a time and temperature resource and share some flavor pairing advice.”

According to AC Nielsen, one of the strongest growing categories in retail is fresh prepackaged salmon, which has had a growth rate of 300 percent since 2016, Sundheim says.

Retailers are calling out source-of-origin on seafood in response to customer demand and using terms such as “wild caught” as a descriptor.

In fact, according to Chicago-based Nielsen, “Unlike ‘farm raised,’ consumers are very aware of the ‘wild caught’ claim, and this claim is more likely to spark a purchase, as 56 percent of consumers stated it makes them more likely to make a purchase.” Nielsen notes this messaging resonates most with higher-income households, and older and Asian and Hispanic households.

Poke, tartare and lower-impact preparations are all performing well in the seafood category.

“These are born, to an extent, off of the popularity of sushi,” Webster says. “What works well here is that it allows the seafood to really shine as it is without a great deal of impact on the basic flavor profile of the seafood.”

Although poke was a bigger trend about a year ago, it’s still growing on menus, Freier says. “In fact, mentions of poke are up 208.8 percent in the past five years on menus,” she says. “Two-fifths of consumers aged 18 to 34 say they would order raw fish from restaurants.”

Fish pairs well with global spices and street foods that have been on the scene for a while, such as poke, ramen and steamed bun dishes, Sundheim says. 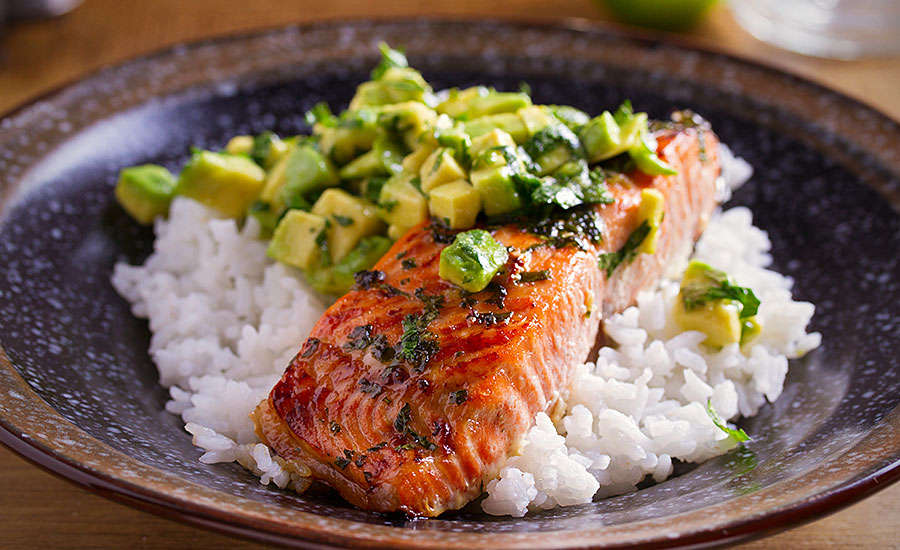 Seafood has also benefited from the small-plates movement, Webster says, “as these proteins work well in smaller portions and allow those consumers less comfortable or familiar with seafood to try it and enjoy it without committing to an entire plate.”

The more consumers sample new fish entrees, the more open they are to new species and flavors.

“Half of consumers demand a wider variety of seafood on restaurant menus, and 37 percent want to see more ethnic seafood dishes,” Freier says.

“Latin seafood is particularly trending, including fish and shellfish (shrimp and lobster) tacos and nachos, as well as Peruvian ceviche and use of Latin rubs, seasonings and spices for center-of-the-plate fish.”

Overall, 52 percent of consumers ages 18 to 34 say they would be very likely to order a Mexican seafood entrée at a restaurant for lunch and 44 percent say the same for dinner, Freier says.

Another up-and-coming trend is the integration of seafood into breakfast and the continuation of all-day snacking.

Popular breakfast options include seafood Benedict, shrimp and grits and ceviche, as well as tacos and frittatas.

Techniques such as sautéing, poaching, frying and slow roasting will never go out of style.

“As consumers continue to learn more about seafood, texture is becoming the key driver of how seafood is prepared,” Sundheim says. “The soft and delicate palate feel of seafood has brought out old, yet new cooking techniques. Sous vide is a perfect example — the amount of home sous vide kits sold is incredible.”

In addition to low-impact preps, grilling and encrusting remain popular.

“They are perceived as healthier and impact not only the flavor but have visual and textural appeal for consumers without losing the overall healthy perception,” Webster says.

Seafood still retains its health halo, which is why more consumers are trying to integrate it into their weekly menus.

Fifty-eight percent of consumers consider seafood to be healthier than beef and/or pork, and 43 percent say the same of chicken and/or turkey, Freier says.

Fresh seafood is also key: 87 percent of consumers say they are more likely to buy seafood that is fresh, and 61 percent are willing to pay more for it, Freier says. 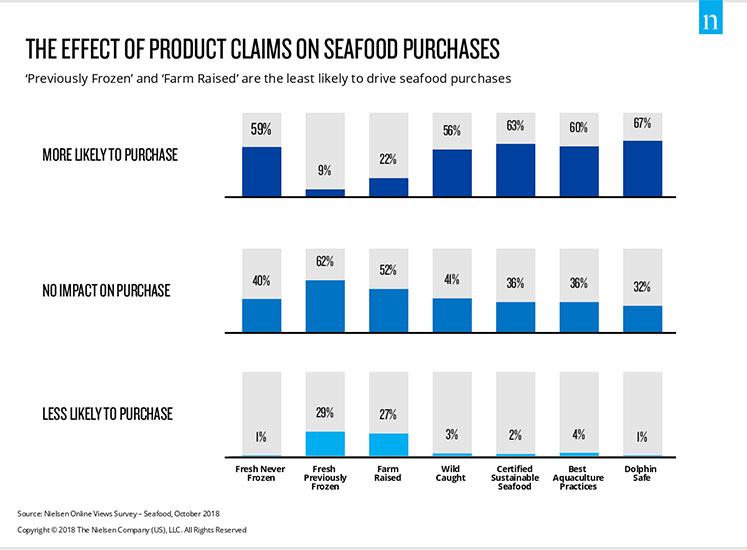 In addition, sustainability is important to diners.

“Knowing who and how we buy our fish from has been not only the right thing to do, but also increased volume and menu items,” says Bill Ranniger, executive chef at Duke’s Seafood and Chowder, based in Seattle. “People like to know where their food comes from. We have added many healthy, sustainable and very tasty items — flavorful food, expertly prepared and sustainably sourced.”

“The first (reason) is Alaska’s commitment to sustainability,” Ranniger says. “We at Duke’s go to Alaska often, meeting the best fishermen in the world. We buy from the best of the best, from people that take exceptional care of the fish and the environment.”

Many of Duke’s new dishes are pan-seared and grilled. “When working with great fish, you don’t have to do a lot to make the taste great,” Ranniger says.

Seafood tacos are more popular than ever at many restaurants, including Duke’s. “We hand-stretch our tortillas and make all our own salsas and relishes,” Ranniger says. “Currently we have a salmon kale salad on the menu. It includes local organic beets, mangos and grilled goat cheese.”

“Overall, seafood is benefiting from the overall growth of health/wellness-focused behavior,” says Webster. “As functional foods continue to shift the way consumers think about healthy eating, many types of seafood should benefit. Sustainability issues, though, will remain a challenge for certain types of seafood.”

As consumers learn more about different species and prep techniques, they will become comfortable adding more seafood to their diets, whether they order it at a restaurant or grocery store. NP