This website requires certain cookies to work and uses other cookies to help you have the best experience. By visiting this website, certain cookies have already been set, which you may delete and block. By closing this message or continuing to use our site, you agree to the use of cookies. Visit our updated privacy and cookie policy to learn more.
Home » 2018 Seafood Report: Tidal surge of trendy options
SeafoodSpecial Reports
Special Report | The Seafood Report

Haven’t heard of poke (“POH-keh”) bowls? Get ready as this Hawaiian specialty — raw fish salad in a bowl — continues its steady spread from California to the East Coast.

“Americans’ seafood palettes are growing as demonstrated by the growth of poke at retail and foodservice and sushi at retail,” says Victoria Parr, domestic marketing director at Alaska Seafood Marketing Institute (ASMI), in Seattle. “The latest innovations by processors are for poke kits [for example, Great American Seafoods and Orca Bay] and increased value-added products [such as Trident’s new retail and foodservice Alaska pollock product forms].”

The $208 billion U.S. commercial and fishing industry is holding steady for another year as consumers continue to embrace quality favorites and new flavors and formats at retail and restaurants in 2015, according to the National Oceanic and Atmospheric Administration, based in Silver Spring, Md.

“Knowing that seafood is mostly eaten away from home, and with 62 percent of consumers eating fish at least once a month and one-third expecting to increase their consumption, we see seafood as a strong menu category that operators and manufacturers should continue to focus on and build [according to data from our recent Keynote Report: Seafood],” says Joe Garber, marketing coordinator at Datassential, based in Chicago.

Demand varies based on the year and species, Parr says.

“Less traditional species are gaining in popularity on menus, like rockfish from Alaska,” Parr says. “Rockfish is known for its delicate, mild flavor, pearly white color and tender yet meaty texture.”

Consumers’ desire for a variety of delicious, healthy protein options is driving demand for more seafood species, including the lesser known species.

“The industry is also heavily investing in Alaska pollock as it is a great seafood option for value-added ease, consistency at retail and foodservice, and demand for this domestic species has grown significantly,” Parr says.

When browsing the seafood case, consumers look for new options and brands that offer an authentic sourcing and sustainability story.

“With growing consumer awareness and increased desire at retail for convenient, affordable options, the seafood industry overall is being challenged to deliver innovative products that also adhere to the highest sourcing and quality standards,” says Leslie Harris Thomas, marketing manager at SeaPak Shrimp and Seafood Co., in St. Simons Island, Ga. “Seafood is also gaining ground as a leading protein on restaurant menus nationwide, which in turn is fueling consumer desire for restaurant-inspired, chef-quality seafood options made easily at-home.” 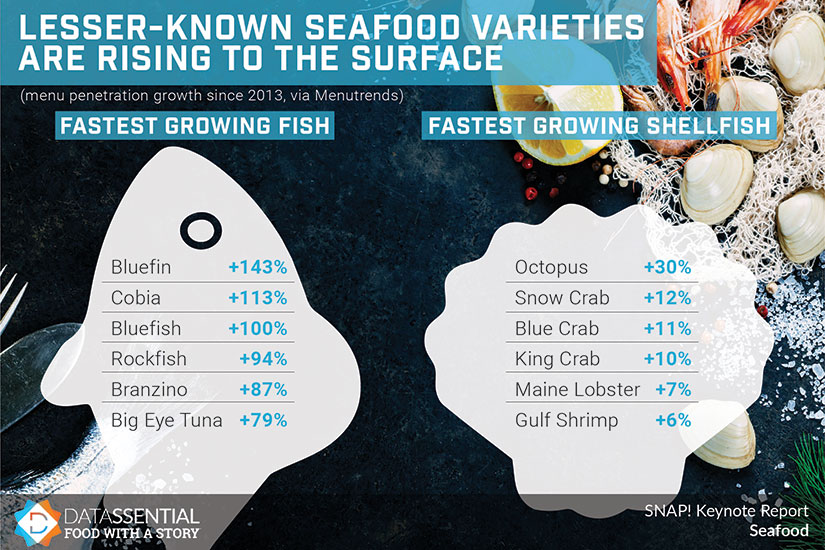 Branching out of dinner

Seafood is branching out of dinnertime to also be considered as a lunch and snack option, such as with popcorn shrimp or tuna.

“In fact, 88 percent of consumers have grabbed seafood as a snack,” Garber says. “Trendy dishes like poke and fish tacos have also put the spotlight on seafood.”

According to Chicago-based Mintel’s 2017 Meat, Poultry & Fish Global Annual Review, global snack launches that feature meat, poultry and fish increased 11 percent from 2014 to 2016. Most of the innovation came from the United States, China, Thailand, South Korea and Germany.

More consumers start their day with seafood, with choices such as versatile salmon and shrimp, in their breakfast or brunch, Garber says. In fact, 17 percent of restaurants offer seafood at breakfast and brunch in Southern dishes, tacos and egg dishes such as frittatas, omelets and Benedicts.

Seafood lovers can be found in all age groups, as well. “In addition, overall seafood attitudes and behavior are unusually consistent across demographic groups, with only a few minor differences between Millennials vs. other age groups and households with and without children,” says Garber.

Sixty-five percent of consumers eat seafood at least occasionally (once every 90 days), including 56 percent of 18- to 34-year-olds and 71 percent of 35 and overs, says Lizzy Freier, managing editor at Technomic, a Chicago-based Winsight company.

“Fifty-three percent eat seafood at least weekly, less often than they eat beef, pork and chicken,” says Freier. “This is slightly fewer than those who ate seafood on a weekly basis two years ago. This is likely the result of lower meat prices, leading to more consumers substituting seafood with meat.”

Among consumers who report eating more seafood in the past year, health concerns have been the primary driver, she says.

“Currently, we are seeing steady growth in seafood popularity at retail, particularly in oven-ready, prepared seafood options, as shoppers look to the frozen aisle more often for convenience and value,” Harris Thomas says.

In addition, consumers demand a wider variety of seafood options across the board, with a broadening desire for new tastes and flavors rising to the top of purchase drivers for the category, she says.

“Shoppers are also looking for greater variety in the size of packaging and amount of product available on-shelf, as well as stricter adherence to best-in-class sourcing and sustainability practices,” says Harris Thomas.

As with other proteins, consumers want to know where their fish comes from and, in particular, equate Alaskan seafood with quality, according to research conducted by Datassential on behalf of the ASMI in 2017 to better understand seafood eaters’ behavior. In fact, 72 percent of consumers surveyed say that seeing the Alaska Seafood logo would increase their likelihood to purchase.

“Latin seafood is also trending: fish, shrimp and lobster tacos and nachos, ceviche and Latin rubs, seasonings and spices for center-of-the-plate fish,” she says. “This adds ethnic and flavor appeal.”

Poke also remains a big trend. “Although only a tenth of consumers say they would order poke, this is twice as high in the West — a trendsetting region,” says Freier.

Seafood boils are becoming more popular. “Consumers increasingly love a unique experience when they dine, and seafood boils in a bag deliver,” Freier says. “They also allow for customization and a do-it-yourself technique.”

What’s in a name? Plenty. Consumers want to know where their food comes from, whether it’s in the grocery store or restaurant menu. Chicago-based Datassential researched seafood eaters’ behavior for the Alaskan Seafood Marketing Institute (ASMI) in 2017 and found:

“Seafood already has a solid health halo — it’s the No. 2 reason consumers say they eat it, right behind great taste,” Garber says. “Although consumers are very driven by price and format, things like sustainability are less important to them.”

Sustainable seafood is preferred, he notes, but not a game-changer for most consumers.

Interest in sustainability, however, may increase this year as consumers pay more attention to environmental issues. The National Restaurant Association’s annual “What’s Hot” list for 2018, compiled from its survey of 700 professional chefs, ranked sustainable seafood fifth in its Top 20 Food Trends and environmental sustainability sixth in its Top 10 Concept Trends, Parr says.

“Consumer perception of fish as a nutritious and beneficial protein source, at least compared to meat and poultry, should help the category maintain sales performance and, for brands capable of capitalizing on those qualities, could provide a key boost,” Parr says.

Likewise, “thawed” on seafood packaging has a strongly negative connotation, signaling a disconnect between consumer perceptions and the reality of the seafood counter, Garber says. Datassential’s Keynote Report: Seafood, in fact, points out half of restaurant operators freeze their fresh seafood purchases because of the challenge of accurately meeting customer demand — or lack of it.

“Though not a top issue, consumers would strongly prefer to see a mention of low mercury content,” as well, he says.

“Additionally, consumers are demanding a wider variety of seafood options across the board, with broadening desire for new tastes and flavors rising to the top of purchase drivers for the category,” she says.

Shoppers also look for greater variety in the size of packaging and amount of product available on-shelf, as well as stricter adherence to best-in-class sourcing and sustainability practices, Harris Thomas says.

“Quick-and-easy mealtime solutions that are both shareable and snackable are trending upward,” Harris Thomas says. “This shift is most noticeable among young families, with Millennial moms and dads seeking out seafood more often, prioritizing value, quality and taste, as well as more variety and options.”

With growing awareness for international tastes and new flavors becoming mainstream, the seafood shopper overall has become more adventurous in their seafood selections, she says.

“We are beginning to see a shift in the driving factors behind consumers’ decisions to choose seafood over other proteins,” Harris Thomas says. “According to Datassential’s 2017 Keynote Report: Seafood, fewer than half of consumers say they eat seafood because they are trying to eat less meat, suggesting that seafood is now being seen as a leading protein choice suitable for a variety of mealtime occasions.”

Seafood is steadily expanding its influence as a healthy, everyday, quick-and-easy protein suited for a variety of consumer lifestyles and mealtime occasions.

For more on the seafood industry, read our Seafood Report Archives.

State of the Seafood Industry 2018