This website requires certain cookies to work and uses other cookies to help you have the best experience. By visiting this website, certain cookies have already been set, which you may delete and block. By closing this message or continuing to use our site, you agree to the use of cookies. Visit our updated privacy and cookie policy to learn more.
Home » Surveying the dry-aged beef crust
Meat and Poultry ProcessingBeefExpert Commentary
Tech | Meat Science Review

Dry-aged beef is a specialty meat product that has recently enjoyed an increase in popularity in the high-end food market. It is considered especially desirable for its unique flavors.

Typical meat purchased in a grocery store is wet-aged for a short period of time, meaning it has been vacuum-packed and refrigerated before reaching the consumer.

In contrast, dry-aged beef undergoes the aging process without protective packaging. During the aging period, the meat undergoes a significant loss of moisture and develops an outer crust of tissue laden with microbes. These microbes, mainly fungi and bacteria, are not considered contaminants, but rather may be an important component of the dry-aging process that aids in the development of distinct flavors. But there is very little known about the microbial community compositions or their role in dry aging. 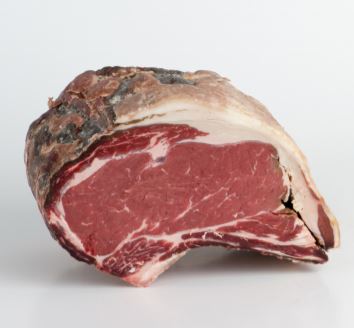 We sought to use modern sequencing techniques to survey the microbiome communities of dry-aged beef loins in order to identify key microbial members found in the crust. In addition, we designed the experiment to identify differences in community composition between aging facilities as well as microbial distribution across the loin’s surface and within the tissue.

We analyzed beef bone-in strip loins from five dry-aging facilities across the United States. Each strip loin was aged for 45 days under similar temperature and humidity conditions. One facility (“A”) treated loins with ultraviolet light for microbial control. Samples from each loin were excised from three positions on the anterior surface of the longissimus lumborum et thoracis: near the subcutaneous fat (superficial), the center of the ribeye surface (medial) and near the 13th rib. At each position, the excised sample was cut parallel to the meat surface to separate the inner and outer portions. The inner portion was then cut again perpendicular to the meat surface twice to create three biological replicate samples.

Table 1. Temperature and relative humidity data for each dry-aging location.

DNA from the microbes was extracted and primers designed for specific amplification of unique identifying regions of the respective microbial genomes were used to amplify select portions of fungal and bacterial DNA. The sequencing was performed with a next-generation sequencing technology, Illumina MiSeq, that allows for the generation of millions of sequences from samples.

Interestingly, neither fungal nor bacterial DNA could be obtained from the loins treated with UV light. This was somewhat expected because UV light is a powerful antimicrobial. Dry-aging systems that use UV light produce very consistent product with less yield loss from trimming; however, they may not benefit by the flavor compounds that the microbes are hypothesized to contribute.

In our analysis of core Operational Taxonomic Units (a group of closely-related individuals, abbreviated as OTUs), which we defined as being present in 75 percent or more of all samples, we identified four core fungal OTUs and one core bacterial OTU (Table 2). Of the four core fungal OTUs identified, one had literary associations with meat products (Penicillium polonicum), most commonly associated with dry-cured hams. Previous literature suggests that some isolates of this microorganism are associated with the production of adulterants when pork products are aged at higher temperature; however, it is not known whether these challenges exist for the conditions under which beef is dry aged. The other core fungi identified (Debaryomyces udenii, Mucor PG272 and Penicillium bialowiezense) were not found to have literary associations specifically with meat production, but have been noted in other food-production systems and have closely related species that may be associated with meat aging and other fermentation processes. The core bacterial OTU identified in the study, Pseudomonas fragi, is associated with meat products and different isolates may have varying effects on the sensory products of meat. Pseudomonas species are often connected with aerobic meat spoilage, but due to the nature of dry-aged meats, it is assumed that although these species were found, they likely had little opportunity to impact the final product. Bacteria tend to require abundant moisture to be viable while dry-aged meats have a very dry surface.

The research identified fungal communities composed of similar OTUs in varying relative abundances, depending on the aging facility from which the sample originated . The community compositions between the aging facilities (locations) differed significantly for both the fungal and bacterial datasets, while the compositions did not differ significantly based on the position on the loin or the depth from which the sample was taken. This indicates an even distribution of microbial populations throughout the beef loins.

The variation in community compositions may be a driver of differences in sensory profiles between beef dry aged in different facilities under similar conditions. Further study into the factors determining microbial communities, as well as the impact of specific microbes on sensory properties, will be important future steps for dry-aged beef producers to enhance the safety and quality of the product. NP

To view the figures noted in this article, please view the full abstract published in Meat and Muscle Biology at https://doi.org/10.22175/mmb.10373

Consumers getting the marbling message

The value of telling the story of your meat product

Dr. Phil Bass is an assistant professor in the department of Animal and Veterinary Science at the University of Idaho. For more information, contact him at pbass@uidaho.edu.

Diana I. Clark is with the Ohio State University College of Food, Agriculture and Environmental Sciences’ Agriculture Technology Institute, in Wooster, Ohio

Daniel L. Clark is with the Ohio State University College of Food, Agriculture and Environmental Sciences’ Department of Animal Sciences, in Wooster, Ohio.

Thomas Mitchell is with the Ohio State University College of Food, Agriculture and Environmental Sciences' Department of Plant Pathology, in Columbus, Ohio.

Rachel D. Capouya is with the Ohio State University College of Food, Agriculture and Environmental Sciences' Department of Plant Pathology, in Columbus, Ohio.

The effect of freezing on the quality of dry-aged beef