Seafood sales are up as consumers buy healthy, versatile fish.

Pandemic cooks are looking to seafood to provide healthy, versatile dishes — but mostly, just to have a special treat during trying times.

“According to Technomic’s 2019 Center of the Plate: Seafood and Vegetarian Consumer Trend Report, top purchase drivers for seafood are just liking seafood (52 percent), a craving for a specific seafood item (46 percent) followed by to treat myself (39 percent),” says Lizzy Freier, senior managing editor at Technomic, a Winsight company, based in Chicago. “Seventy-three percent of consumers classify seafood as healthy or very healthy, but only 33 percent of consumers select seafood because it’s healthier than meat options.”

The $102 billion seafood industry predominantly relies on restaurant and institutional food service sales, according to the National Oceanic and Atmospheric Administration’s latest annual report, from 2018. These restaurants are struggling as the Coronavirus (COVID-19) epidemic has caused multiple lockdowns or restaurant closures.

In fact, 65 percent of consumer expenditures for seafood were at restaurants and other away-from-home sources. Thirty-five percent were at retail and other at-home sources, according to a recent paper that examines the National Health and Nutrition Examination Survey (NHANES) from 2007-16 which looked at pre-pandemic U.S. seafood consumption (Food Sources and Expenditures for Seafood in the United States, in Nutrients).

Americans’ favorite seafood species are shrimp, salmon, canned tuna, catfish/pangasius and tilapia, according to the Nutrients study. The researchers pointed out that crab, shrimp and cod were popular choices at restaurants, while tilapia, canned tuna and salmon were more likely to be bought at grocery stores.

For the past 30 years, Americans’ weekly consumption of seafood has remained around 5 ounces per week, instead of the recommended 8 ounces per week. Only 10 to 20 percent of consumers are estimated to meet the federal dietary guidelines for seafood, the Nutrients report shows. 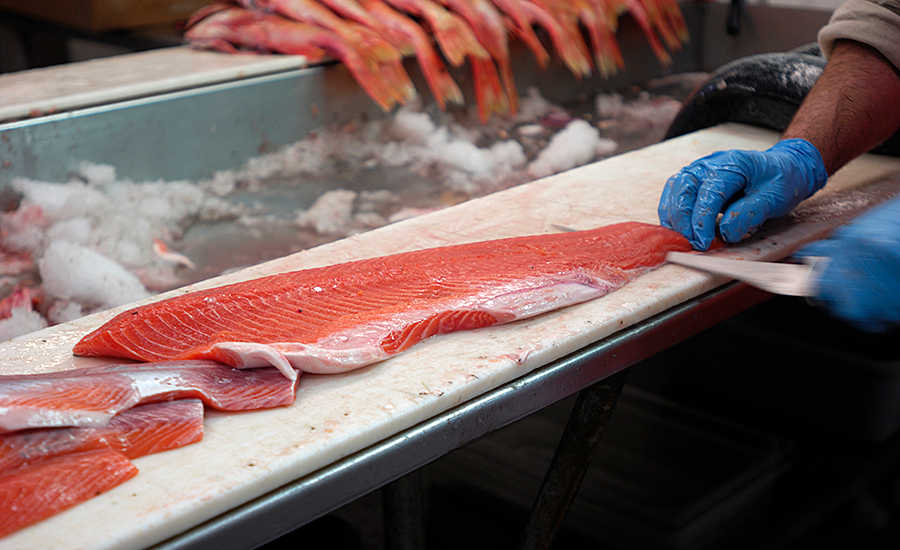 When they purchase seafood at grocery stores, consumers most frequently purchase tilapia, canned tuna and salmon.

Diets may be changing. Seafood was the fastest-growing category at retail at the end of May (with a 26 percent increase in volume) and through mid-summer (up almost 60 percent for fresh seafood by the end of June), according to Nielsen data given to SeafoodSource.

“Consumers are looking for more premium, special items like crab legs, lobster tails and shrimp,” says Stacy Schultz, director of marketing/sustainability coordinator at Fortune Fish and Gourmet, based in Bensenville, Ill. “They are tired of cooking and want something special from retail or carryout. Seafood sales increased this year and will continue to improve next year.”

Sea eggs with other eggs

The COVID-19 lockdowns put a tremendous amount of pressure on the seafood supply chain, similar to other operations that had to transition from primarily sourcing restaurants to retail markets. It took time to make the switch and form new relationships.

At retail, customer loyalty has increased with seafood purchases. “They are also moving from fresh seafood to the frozen case,” Schultz says.

Frozen and canned seafood is appealing to consumers who want to stock up with affordable, healthy options. High-end canned and jarred tuna emphasize their sustainability, nutrition and health attributes.

Home cooking will continue for quite some time, and consumers are open to adding seafood to their weekly meal rotations. “Seafood is easy to prepare at home, and it’s quick and healthy,” Schultz says. “There’s not one seafood that is easier to prepare over another; they are all pretty forgiving.” 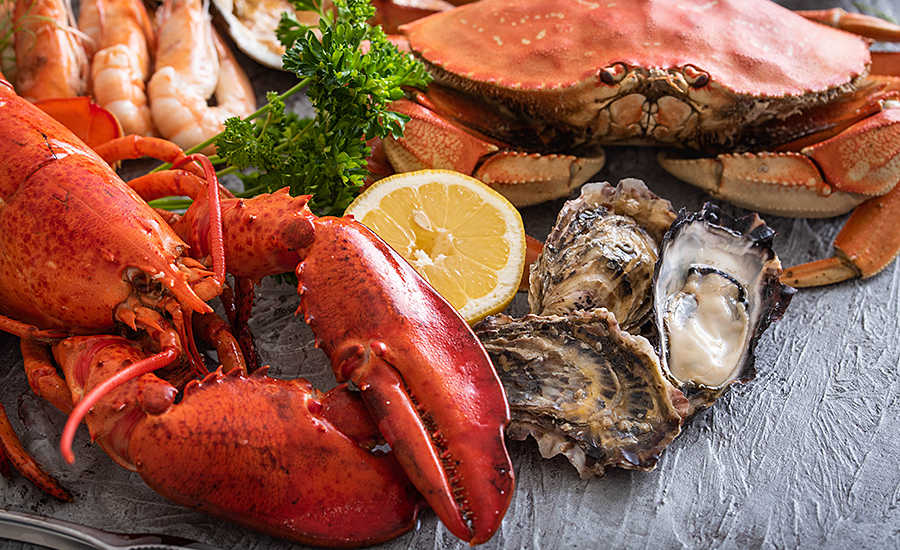 Independent restaurants continue to be the vanguard of trends, as nontraditional koshos with seafood, fish/seafood chicharonnes, fish/seafood meatballs, sea eggs with other eggs and plant-based seafood are now available on more menus, according to Technomic’s Emerging Eats report.

“As far as something different, we’ve seen incidence of fish/seafood used in charcuterie boards in place of the traditional cured meats and cheeses,” Freier says. “Bonefish Grill launched a Sea-Cuterie Board, for example, with an assortment of chef-inspired bites from the sea.”

These trends track with the idea that if consumers are able to visit a restaurant today, they want something unique. “When consumers are able to order restaurant foods, they want items they can’t easily make at home like sushi, lobster, shrimp tempura and lobster rolls and sandwiches,” says Kelley Fechner, director of customer solutions at Datassential, in Chicago. “They also are more likely to order filet mignon and prime rib and authentic global cuisine such as Korean and Mexican.”

The leading preparation style preferences for seafood, according to Technomic’s 2019 Center of the Plate: Seafood and Vegetarian Consumer Trend Report are grilled (39 percent), deep-fried (29 percent) and pan-fried (29 percent).

Overall, seafood is on 87.7 percent of menus, according to Technomic’s Ignite Menu data.

“Menu mentions of seafood are down about 5 percent in the past year (Q3 2019-Q3 2020), but menus overall are streamlining due to the pandemic, so this number doesn’t really stand out in any way to me,” says Freier. “Particular seafood types showing year-over-year growth on menus include orange roughy (+12.8 percent), perch (+5.1 percent), spider crab (+1.8 percent), abalone (+1.7 percent) and herring (+1.0 percent).”

b Per individual consuming that species group in the past 24 h;

c If species group was not provided, the food was assigned either “fish”, “seafood”, or “shellfish”. 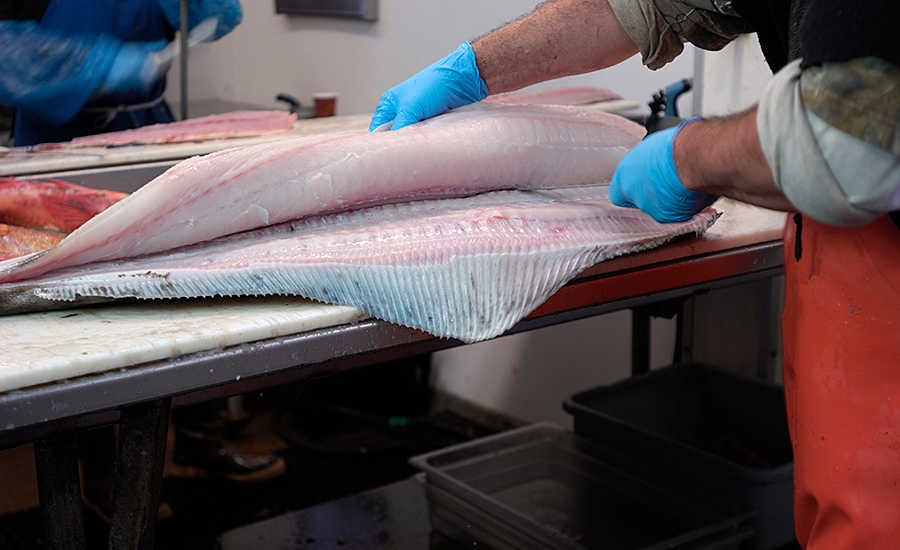 New menu introductions of seafood dishes are down, specifically in April and May, Fechner says. In March, these COVID-based changes hadn’t really taken effect as menu items were already in the pipeline.

“We’ve also seen this with new intros for all foods through the end of 2020; but we didn’t see as many seafood intros as we would normally like to see which is definitely a challenge for the industry,” Fechner says.

Seafood usually has a higher penetration of casual and fine-dining menus, and those segments are suffering the most in lost sales.

We do see that consumers are interested in trying new foods or a type of dish that is of interest to them. “The trends we’re seeing are fried shrimp is growing — one of the top 15 appetizers. Poke is available at a lot of chains or more restaurants are opening as only poke restaurants. And seafood sandwiches like salmon burgers — the fastest growing sandwich— cod sandwiches and lobster rolls are doing well,” Fechner says.

Fish and shellfish menu items with spicy flavors such as chipotle and sriracha are also doing well, Fechner says.

To appeal to consumers who want to try something new but are hesitant to experiment, operators can take something familiar and pair it with a new sauce or flavor or combine a traditional preparation with a new fish species. “Something familiar paired with new flavors is always a winning combination,” Fechner says, pointing to The Cheesecake Factory’s new grilled shrimp bacon club.

Moving forward, sustainability and transparency remain important selling points for seafood, although some focus on wild capture has ebbed in recent years. “Sustainability will be an overarching issue for the category and is likely to be more important rather than less as we head into the next 12 to 18 months,” says Maeve Webster, president of Menu Matters, based in Arlington, Vt.

The Nutrients study pointed out that farm-raised products and imports are being stocked more as U.S. seafood production is stable but not increasing from mid-1980s numbers.

“Consumers still like to know the story behind the fish or shellfish that’s on the menu,” says Fechner.

Although consumers initially were drawn to comfort foods at the beginning of the COVID-19 shutdowns, many consequently turned their focus to health and wellness to try to lessen the potential effects of the virus. Foods that promote physical and mental health will only increase in popularity this year, said Robyn Carter, founder and CEO of Hillsdale, N.J.-based Jump Rope Innovation, during the Food Institute’s webinar “What’s Ahead in 2021?” 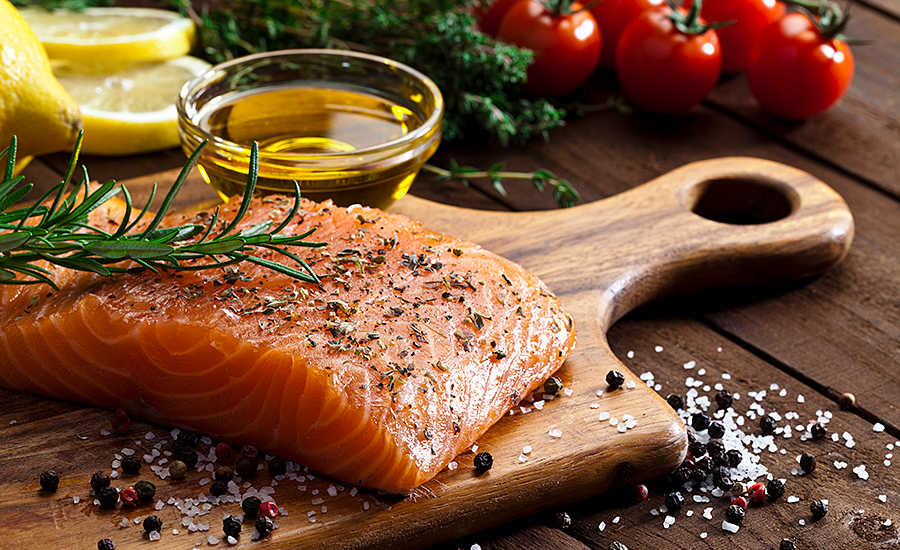 “I think as soon as restaurants can reopen and mitigation efforts start to roll back we’ll see a significant uptick in seafood sales,” says Webster. “Seafood isn’t something most people feel comfortable preparing at home so there’s likely to be pent-up demand once they can really get back.”

Indulgent options and items featuring seafood that are unique to an operation will drive the initial growth, as people celebrate the return to some level of normalcy, Webster says.

“After that, we’ll settle into a mix of indulgence and healthier options as seafood does still enjoy that halo,” Webster says. “But I do see restaurant visits shifting back to more special occasions for many consumers rather than habitual visits, which will really support those indulgent, unique dishes.”