Breakfast and dinner sausages explode in popularity during the pandemic.

What’s summer without a hot dog or brat? These staples of the backyard party, baseball games or Fourth of July gatherings are more popular than ever — especially as Americans look forward to long-awaited family reunions.

“I think the future for sausage is bright,” says Anne-Marie Roerink, principal and founder of 210 Analytics, in San Antonio, Texas. “While every protein in the meat department will have a hard time lapping the results of 2020, demand continues to sit comfortably above the 2019 pre-pandemic normal. Add to that that Americans are ready for a re-do on all the missed celebrations, family and friends’ get-togethers and the massive investments made in all things grill and smoker, and I think we’re going to see a very strong barbecue season this summer.”

Both breakfast and dinner sausage have been on multiyear growth trends, so the explosion in sales that we witnessed during the pandemic is really an acceleration of a trend that we had already been seeing, Roerink says.

“Dinner sausage is the bigger of the two — at 2020 sales of $4.7 billion — which was an increase of 21 percent over year ago, according to IRI for the multi-outlet universe,” says Roerink. “But this is on top of a 2.6 percent increase in 2019 and up 2.1 percent in 2018. And this goes hand-in-hand with solid increases in volume also.”

In 2020, breakfast sausage totaled $2.1 billion, which was a 20 percent increase year over year, after gaining 1.8 percent in 2019 and 3.7 percent in 2018. “So, these are certainly numbers that point to strong and growing offerings,” Roerink says. “And that makes all the sense in the world as they are versatile, convenient, easy-to-prepare and kid-friendly items — which is exactly the type of items that have been doing well.”

But according to Chicago-based IRI, an analytics firm, the average assortment per store of dinner and breakfast sausage has dropped from 92.7 items in 2017 to 86.5 items in 2020.

“I believe dinner and breakfast sausage may be an interesting segment for retailers to review, especially for limited-time offers of fun, new flavors or cross-merchandised solutions,” says Roerink. “For instance, Publix had a wonderful breakfast endcap the other day, with all the items ranging from orange juice and coffee to bacon and breakfast sausage.”

On the menu: New, unique flavors


Sausage is popular with diners because it’s versatile, flavorful and unique.

About 53 percent of operators have sausage on their menu, according to Technomic’s Ignite menu data, says Lizzy Freier, managing editor at Technomic, a Winsight Company, based in Chicago.

“Though incidence is down slightly on menus — no surprise given menu streamlining amidst the past year due to the pandemic — sausage mentions are up in certain items, including mixed protein bowls (up 120 percent year over year), breakfast quesadilla entrees ( up 60 percent), breakfast bowls (up 33.3 percent) and build-your-own combos (up 32.1 percent),” says Freier.

And consumers are interested in buying more pork options.

“Data from Technomic’s 2021 Beef and Pork Consumer Trend Report shows that 37 percent of pork consumers would order regular or smoked sausage at least occasionally (once every 90 days),” says Anne Mills, director at Technomic, noting the survey included 1,034 consumers who eat pork once every two to three weeks. “This is higher among consumers ages 35 and older (41 percent) than 18 to 34 (30 percent).”

The report found that there is substantial demand for unique pork options: 39 percent of consumers would like restaurants to offer pork entrees with new, unique flavors and 35 percent of consumers are interested in trying pork dishes made with global flavors/ingredients, says Mills.

“Demand is relatively stable compared to 2018 and is driven by younger consumers, who are generally more adventurous eaters,” Mills says.

Plant-based meat alternatives aren’t going away, and consumers are willing to try new varieties. “Beyond beef patties, we’re seeing plant-based substitutes expand into other categories, and 42 percent of pork consumers say they would be likely to try a plant-based pork alternative if available,” says Mills, citing the same survey.

In 2020, IRI reports pork sausage sales represented over 60 percent of all retail sausage sales and outpaced the total sausage category in growth for the 52 weeks ending Dec. 27, 2020, says Jason Menke, director of marketing communications at the National Pork Board (NPB), based in Des Moines, Iowa.

“Pork sausage wins on taste, with half of consumers noting that pork sausage is delicious and saying it is something they love eating,” says Menke, referencing NPB At Home Meat Tracker, April 2021.

Younger shoppers have a higher affinity for pork sausage. “More than 70 percent of Gen Z note that it tastes delicious, and half of them also note it is less involved to cook than other meat,” says Menke.

Traditional flavors tend to be most popular for both breakfast and dinner sausage. And while uncooked makes up the majority of sales, growth has been fueled by fully cooked and ready-to-eat sausage, says Menke.

Compared to other species, Pork Breakfast Sausage drives total Breakfast sausage sales with dollar share of 88% and volume share of 92%. And its growth outpaced the category.

Sausage is certainly a traditional comfort food, but new offerings are focused on health. Varieties include organic, chicken-based sausages and products that have added ingredients, such as apple sausages.

In addition to natural ingredients, sausages have also innovated with the types of protein used, blended sausages, new flavors, formats and packaging in the past five years. “In terms of proteins, innovation runs the gamut from plant-based meat alternatives to seafood and chicken. The innovation in chicken sausage is particularly exciting as it brings a different health positioning and many interesting new flavor combinations,” Roerink says.


“Last year when supplies on the shelf were low, people may have bought sausages, hot dogs and other cuts of meat they normally would not have,” says Sarah Findle, director of marketing and communications at Coleman Natural Foods, in Denver, Colo. “This unexpected trial has resulted in consumers understanding that natural sausages made with clean ingredients are a great source of protein, provide great taste and can be used for multiple eating occasions.”

Several brands now carry protein callouts as well as clean-label callouts such as organic, no artificial colors or flavors or non-GMO, Roerink says. “We see antibiotic-related claims come into the sausage segment also,” she says. “And on the packaging side, I’m encouraged to see more and more vacuum-sealed packaging. This allows for much longer shelf life in store as well as at home, as well as being freezer ready as we continue to see people take fewer trips while buying more each trip.”

Package Claims: No Artificial, No Artificial Preservatives and No Hormone Added are the most common claims for Pork Breakfast Sausage. 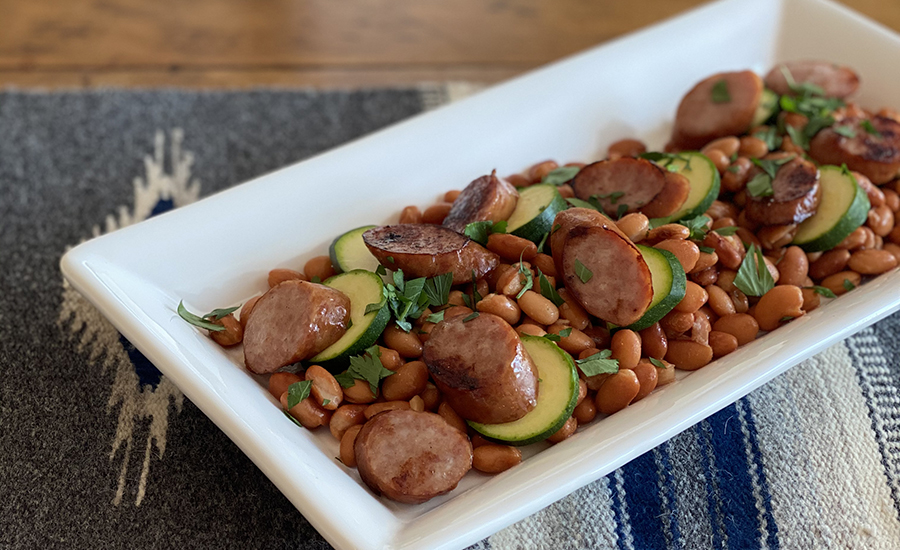 In the end, consumers care more about quality and value than trends. “Shoppers today want to make sure when they do spend money, they are buying quality food they feel good about feeding their family,” Findle says. “Consumers want to be confident in where their food is coming from and will be looking for meat products raised and processed in the U.S. on farms that care about the humane treatment of their animals.”

Consumers’ newfound confidence in cooking at home, which may have been discovered during the pandemic, is ready for old and new favorites this summer. “As grilling season hits its height, we’ll be suggesting new preparation styles and recipe ideas that will make meals and gatherings even more memorable,” Findle says. “We want to inspire people to go ‘beyond the bun’ with sausage recipes like skillet dishes, salads, and appetizers.”

Compared to other species, Pork Dinner Sausage drives total Dinner sausage sales with dollar share of 49% and volume share of 49%. And its growth outpaced the category.