This website requires certain cookies to work and uses other cookies to help you have the best experience. By visiting this website, certain cookies have already been set, which you may delete and block. By closing this message or continuing to use our site, you agree to the use of cookies. Visit our updated privacy and cookie policy to learn more.
Home » Small family farmers generate more than 50% more economic value for local economy, report reveals
Meat and Poultry Industry News

“Local economies would prosper if more adopted Niman Ranch’s approach instead of conventional production,” said Swenson of his findings. “This is the Main Street effect. The small farmers in Niman’s network hire more people, spend more regionally and their employees also spend their money closer to home.”

Swenson analyzed 2019 data on the overall Iowa hog industry contributions and compared it to Niman Ranch-specific inputs and outputs of their 195 Iowa-based farmers. The analysis utilized the IMPLAN, Inc., modeling system, the most widely used input-output modeling system in the U.S. The full methodology and findings can be viewed in the full analysis. Additional analysis findings include: 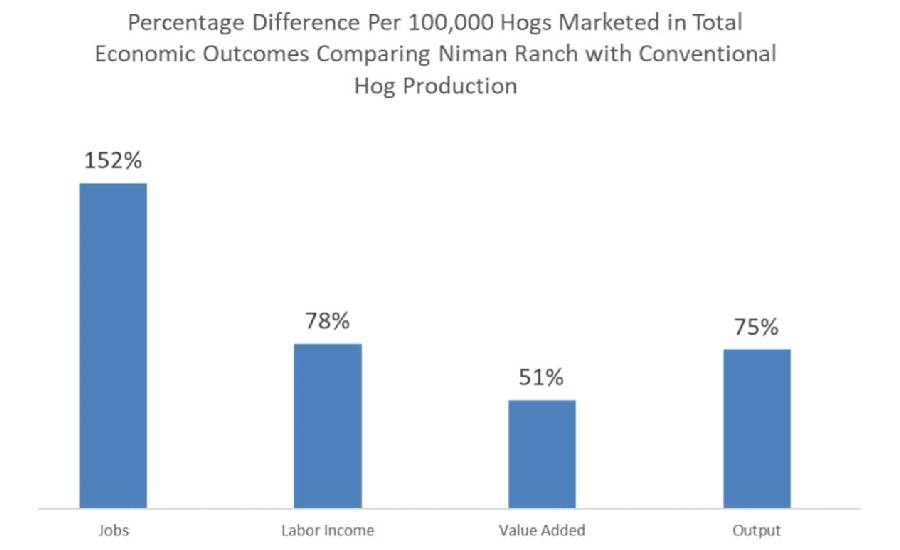 Niman Ranch was founded by farmers and ranchers and its business model was developed to ensure producers are treated fairly and can make a living. Niman Ranch pays farmers a premium that is based on inputs, like feed, rather than commodity markets, providing a stable premium they can count on. The premium pay and security Niman Ranch offers allows farmers to reinvest in their businesses and local communities, creating an economic multiplier effect.

“This study proves that there is significant value in these smaller, diversified farms,” said Chris Oliviero, Niman Ranch General Manager. “We’re never going to feed the world, but the Niman Ranch business model brings real resources and opportunities into rural communities. We’re a small part of the food chain, but our farmers have an outsized positive impact.”

Dave Swenson presented the analysis findings on Saturday August 28, 2021 at Niman Ranch’s 23rd Annual Hog Farmer Appreciation Celebration. The annual event recognizes the contributions and hard work Niman Ranch hog farmers put into raising their livestock with care and their contributions to local communities. At the event, Niman Ranch awarded over $170,000 in scholarships to support the next generation of young farmers and rural leaders and also distributed numerous farmer awards recognizing sustainable farming practices, meat quality and anniversaries working with the brand.

Wellshire Farms donates more than 40,000 pounds of food to local families for the holidays

More than 50 doctors call on the USDA to overhaul the U.S. Dietary Guidelines