This website requires certain cookies to work and uses other cookies to help you have the best experience. By visiting this website, certain cookies have already been set, which you may delete and block. By closing this message or continuing to use our site, you agree to the use of cookies. Visit our updated privacy and cookie policy to learn more.
Home » From farm to food hub at This Old Farm Inc.
Meat and Poultry Industry News 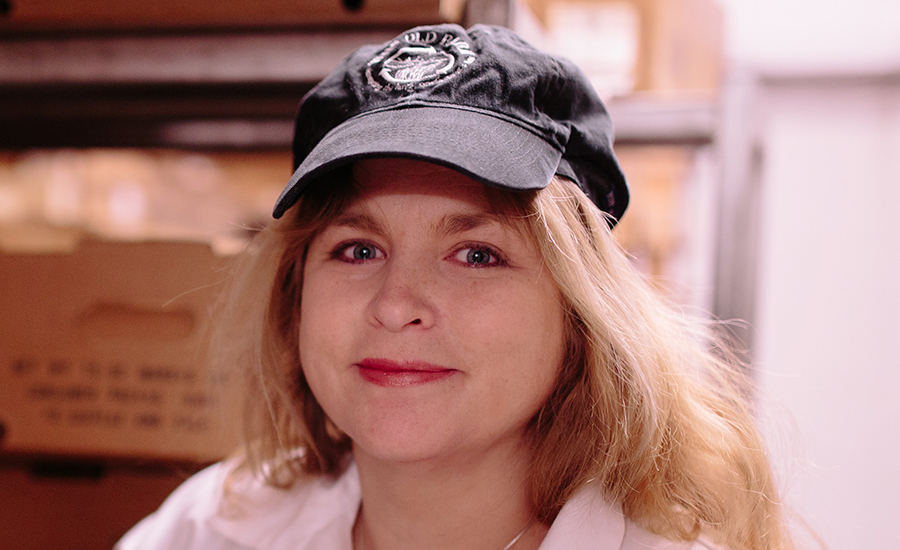 Jessica Roosa started This Old Farm to process her livestock and beef, pork, goat, and lamb for local farmers. The company now touches every aspect of the food supply chain and growing to reach new markets and produce new items with a growing list of customers.

Jessica Roosa isn’t what you would expect from a typical leader of a meat processing business. She is a first-generation farmer. She had a background in biology and the pharmaceutical industry. She once was … a vegetarian.

“When you say never about anything, that usually comes to find you. That makes sure that it happens for you in a big way,” says the president of This Old Farm Inc., which is based in Colfax, Ind. “And so now I own a big meat business, simply because I was a vegetarian for a number of years, probably.”

Meat processing is at the heart of This Old Farm, but it is a multi-faceted business that spans the entire supply chain. It harvests and processes beef, pork, lamb and goat for farmers and serves as a co-packer for other food companies. It distributes meat through wholesale channels and also sells to consumers through its own butcher stores. It helps non-meat culinary artisans find expanded audiences for their gourmet jams, jellies, pastries and cheeses. The company’s work even extends to the very beginning of the agriculture food cycle — the soil. The company is a strong proponent of regenerative agriculture. The motto on its logo is “Rejuvenating the Land One Farm at a Time.”

“That’s something that I stood behind before the words ‘regenerative ag’ were really being discussed, to the best of my knowledge,” Roosa says. “We were talking about it back when the organic program was beginning. The word ‘sustainable’ was probably out there being used quite a bit, but the word ‘regenerative’ was not.

“But whatever the word, it all comes down to soil health. My first farming operation was changing a traditional crop farm to one that was pasture based because pasture binds the topsoil and keeps it in place, and livestock makes that circle of life happen. Our logo was about the circle of life, and livestock are part of that,” she adds.

This Old Farm was incorporated in 2009, when Roosa first decided to expand into meat processing. But her interest in agriculture came while graduating from college and starting a family. She made the decision to buy a farm near Colfax so that her family could eat well and learn some valuable physical skills. Demand for farm-raised meats grew by word of mouth, and it eventually grew to the point that a processing operation became a necessity

The decision to expand into meat processing came about after Roosa saw the state of an extremely consolidated meat industry. That realization motivated her to get involved in processing, not only for her own livestock but also for the farmers that she had come to know.

“Now, President Biden’s talking about food insecurity. President Biden is talking about meat processing and our lack of capacity, which is fascinating,” she explains, “because 2007 and 2008 is when I was heavily researching the processing industry and realizing that we in America really were in the middle of a food crisis. People didn’t realize we were. People didn’t know that it only took one event to create a problem. And we’ve seen that now; that one event [COVID-19] has happened. That event did disrupt our food supply.” 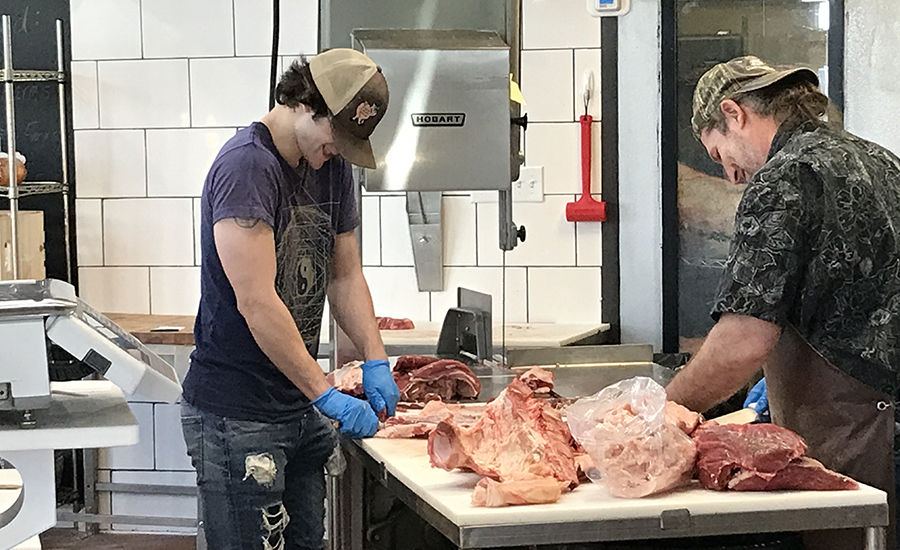 Consumer interest in locally raised and produced food has been growing for years, but the COVID pandemic helped accelerate it and raise awareness of its importance. “What are we going to do with if we have a food security issue? Well, I'm not going to have a food security issue if there is a local food chain. If we know where it’s coming from, who’s processing it, who’s raising it, and where the market outlets are, then there should be no worry in our food supply,” Roosa says.

To get started, This Old Farm began processing in a facility just outside of Colfax. About a year later, the facility burned down, so the company had to rebuild on the original footprint. Since then, Roosa says that the company has made several expansions to the building. As the facility has just one smokehouse, production has been limited to mainly fresh meats and ground products, but a recent 10,000-square-foot addition should increase capacity for ready-to-eat and value-added products. Due to increased demand since the COVID pandemic, the company slaughters five days a week under federal inspection and also processes meat products in two shifts a day, five days a week.

Along the way, This Old Farm also began to support non-meat and even some non-food products from other small businesses. The company sells locally produced items from within a 400-mile radius of Colfax.

“Artisanal items are fun because the meat industry is so regulated,” Roosa says. “It is harder to bring a product through to market, whereas somebody can come out with a new jam and jelly and get it professionally labeled and on the shelf.” 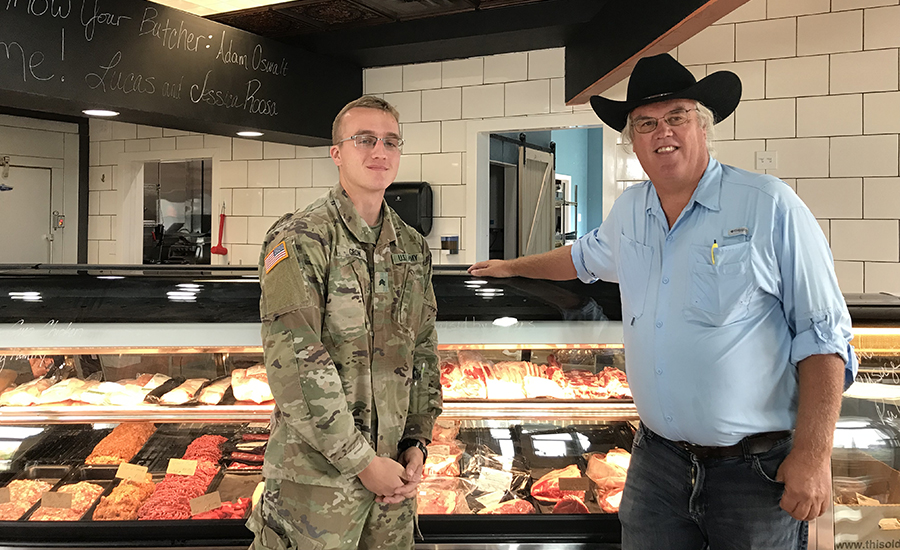 Local farmer Randy Grow and his son at the opening day of This Old Butcher Shoppe. Grow is working to direct market his meat for the first time, with This Old Farm as a partner.

Along with harvesting livestock for farmers on a fee-for-service basis, This Old Farm also supplies product through wholesale channels. Roosa says that the company does not get involved with the Indianapolis foodservice sector, because many of its farmer customers are already servicing that market. Chicago, on the other hand, represents a huge opportunity. The company recently announced that it has partnered with the Elawa Farm Foundation to support the Kinship and Seale Foundation's Food:Land:Opportunity initiative. Roosa says that the goal of the project is to bring a collective group of processors and partners together to look at how to grow the supply web around the Chicago foodshed. Given the size and population of the area, there is plenty of room for multiple processors to participate.

“We’re looking for processors that are interested in collaborating, talking, working, partnering on any level to help grow this market segment and reach Chicago markets,” she says.

This Old Farm has operated a storefront in Colfax, but it broke into a separate retail space with the launch of This Old Butcher Shoppe in Lafayette, Ind. A second store is in the works for the Zionsville-Whitestown area, northwest of Indianapolis. Among the company’s 53 employees are apprentice butchers who have dreams of running their own shop someday. The expansion of the This Old Butcher Shoppe to additional stores can help give them that opportunity.

“I love training butchers up and offering opportunities to artisanal butchers. I have found equal pleasure in watching my son grow up to be a butcher and be passionate about utilizing his hands and his skills in a very real trade,” she says.

In a similar vein, Roosa says that the company’s five-year plan is largely dependent on what customers need. One of the results of the COVID pandemic was that it defined This Old Farm’s best customers. It worked with many new customers during the pandemic, but it made sure that those small processors looking to bring private label lines to market or those small farmers looking to make a living in the ag world were prioritized. As those clients grow, Roosa wants This Old Farm to grow with them and adapt to their needs.

This Old Farm’s focus has been on regenerative agriculture and organic meats, but Roosa welcomes farmer customers of all sizes and operations. As much as she believes in sustainable agriculture, she acknowledges that the health of a farm’s topsoil doesn’t matter if the farm can’t stay in business.

“I love farmers. They all work so hard. And whatever their practices are, they are making the business work however they need to make their business work. So there's no judgment in that,” she says. “We don’t only process for certified organic operations or for a farm that you might consider regenerative. We process for confinement hog operations, just the same. If they want a processor, we’re here. We believe in supporting farmers wherever they are.”

That being said, there have been plenty of success stories as farmers adapt to a more environmentally sustainable agriculture practices.

“Across from us outside of Colfax was a farmer in a farm family that was highly opposed to everything that we stood for and did in the beginning,” Roosa says. “And then they watched us over the years, and they watched us grow in the processing realm. And eventually they came over and started asking questions, and now they have certified organic ground. So we like to see those changes. It's not for it's not for everybody. But for those that do want to make the changes, it can happen, and we’re here to support them.”

This Little Piggy Stays Home at This Old Farm on Saturday May 18th to support Hoosiers Feeding the Hungry!

This Old Farm calls on all livestock producers

Down on the farm