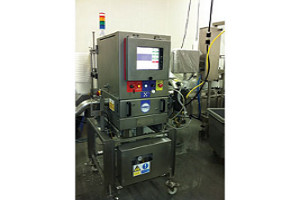 St. Clair Foods is one of the premier foodservice providers for salads and entrees in the United States. Managed out of Memphis, Tenn., since 1976, the company offers hundreds of different products from salad dressings to chilled salads, to dips, frozen entrees and side dishes. With "quality as the main ingredient," according to Brian Edmonds, vice president, St. Clair Foods, the company is quickly expanding their distribution channels.

St. Clair Foods had been investigating the development of a second line of defense to ensure its own strict standards for product quality and food safety. Loma Systems - of which St. Clair has been a loyal customer for 20 years - visited the plant and began the task of mapping out the entire operation.

At that point, St. Clair Foods already was using Loma Systems metal detectors as offline inspection systems for large, 12- to 30-pound containers of finished product. X-ray inspection was immediately identified as the right technology for St. Clair Foods' second line of defense. Loma Systems worked with St. Clair Foods to integrate two X4 PipeLine X-ray inspection systems, one on each of the highest volume production lines. It was decided the two X4 PipeLine systems would be placed in-line to add an extra layer of protection to control the quality of incoming raw product.

The two high-volume production lines run a continuous flow of product at high flow rates. Blue cheese dressing, chunky salsa and potato salad run between 15,000 and 30,000 pounds per hour. The organic nature of these products is not consistent, so Loma Systems recommended a 3-inch pipe width to improve product flow rates and prevent product blockage.

"We run multiple products on each line, so it was important to find an X-ray inspection system with solid product memory," said Dennis Spence, plant manager, St. Clair Foods. The X4 PipeLine systems store up to 10,000 unique product profiles, and the system will auto-calibrate, ready for production within 30 seconds.

"Since integrating the X4 PipeLine X-ray inspection systems, we have been able to share our results and best practices with our suppliers and help them improve their processes as well," said Edmonds. "As a result, the quality of raw product we receive has significantly improved."

St. Clair Foods can now capture product images using Loma Systems' proprietary image processing and 3D modeling technology with speed and reliability. This data-capture system has significantly reduced the number of contaminant instances found during the final stages of production - before product reaches the consumer. This is crucial in protecting the integrity of the St. Clair brand.

As part of the package, Loma Systems included start-up and one week of on-site training for operators and users. St. Clair Foods is also a member of Loma Systems' premium service program. With 5-star service and support, it's no wonder St. Clair Foods trusts Loma Systems to help them verify food quality every step of the way.