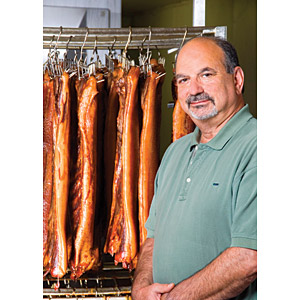 With a reputation for all-natural, premium-quality products and the nation’s top chefs as customers, each day’s production at North Country Smokehouse has a rather high bar to meet. Mike Satzow, the third-generation owner of the Claremont, N.H. company, knows not only where that bar is set but also the number of factors that could affect his operation’s success.
“We’re not smart enough to compete on price,” he jokes, “so we have to maintain consistently high quality and uncompromising food safety standards.”
North Country Smokehouse produces six types of smoked ham, seven kinds of bacon, and 17 varieties of sausage, as well as beef brisket, a range of smoked turkey, chicken, and duck products, and a line of cheeses.
North Country’s motto is “food that’s rooted in passion tastes better.” Among the justifications for that assertion, Satzow notes that in February, his company’s Andouille sausage won the North American Meat Association’s (NAMA) 2013 “Hold the Mustard” award at MEATXPO’13, the group’s annual suppliers’ exposition and convention.
In addition, North Country Smokehouse is the house purveyor for the James Beard Institute in New York City. Upscale hotels, restaurants, institutions, and cruise lines are the company’s primary clientele, and the public can purchase North Country products through the company’s e-commerce site.
“We also have a secondary retail presence through specialty shops throughout New England and the greater Northeast,” Satzow adds.
While many specialty food purveyors might envy North Country’s stellar reputation and elite clientele, Satzow offers one caveat: “We’re only as good as the last batch of product we’ve delivered.”
His firm does not advertise, but builds and maintains its customer base through intensive relationship marketing.
“We work directly with chefs, and the key to those relationships is that once you gain a chef’s trust, you gain an extremely loyal customer,” Satzow says. “By the same token, however, if we were to lose that trust [because of a quality or safety issue], it is likely we would never get it back.”
Satzow has established an aggressive food safety program to protect those products. In 2011, he and his staff began researching and evaluating antimicrobial treatments designed for direct contact with food products. They needed a treatment that was highly effective at killing pathogens but would not alter their products’ flavor or texture.
One promising treatment was Listex, a culture of bacteriophages that are effective against Listeria monocytogenes, developed by Micreos Food Safety (then known as EBI Food Safety), Wageningen, The Netherlands. Bacteriophages (or phages for short) are microorganisms that kill only bacteria. Phages are specific to their target bacterial species, and will not affect desirable bacteria in foods (starter cultures, for example), beneficial bacteria in the human gastrointestinal tract, or other useful, non-pathogenic bacteria in the environment.
North Country reviewed the supplier’s efficacy data and did some in-plant testing of its own. Satzow also spoke with colleagues at a Canadian food company that was using Listex and had had a good experience with it.
“When the USDA approved Listex as a processing aid, we jumped on it,” Satzow remarks. “We felt it was an innovative treatment, and we liked the fact that it is applied topically. It allowed us to improve our food safety standards without compromising key attributes of our product, such as flavor and texture.”
Cost of use was the least of Satzow’s concerns.
“We don’t put a cost on food safety,” he asserts. “We set the highest bar possible for the safety and quality of our products.”