When innovations enter into a given business, the companies that are the earliest adopters tend to gain an advantage over their competitors. Sometimes though, there is an advantage is maintaining those old traditions.

Diestel Turkey Ranch, for example, has maintained traditional production methods, even though many of its competitors are using practices that help grow turkeys larger, faster. They rely on handwork when other companies have automated much of their turkey processing operations. Has it hurt the company? Actually, their turkeys and turkey products have become a premium item among consumers. Not only are the birds a popular seller during the holiday season, but their numerous claims and attributes have struck a chord with today’s consumers.

“We do a lot of things across the operation that we think are very different from our industry peers,” explains Jared Orrock, president of the Sonora, Calif.-based company. “We always want to be clear that there’s nothing necessarily wrong with the way they do it. They serve a critical role in the food system and produce a lot more food than we do, but we do what we think is better or is more appropriate for our goals and our consumers’ interests.” 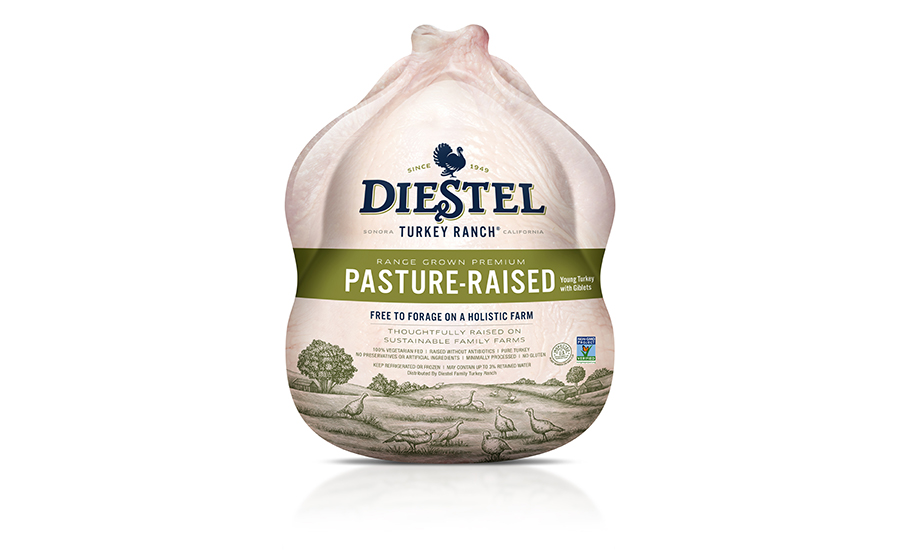 Orrock, along with his wife Heidi Diestel and brother-in-law Jason Diestel, represent the fourth generation of the family to run the business. The company’s roots in California’s Central Valley date back to 1949, when Jack Diestel founded the company on the same property where its primary processing plant and pasture based farm stand today. Jack, now in his 90s, learned how to raise turkeys from his Uncle Ernest. He began processing turkeys to sell in the San Francisco Bay Area. His son and daughter-in-law, Tim and Joan Diestel, took over in the 1980s and laid the foundation for the modern Diestel Turkey Ranch.

At the time, animal antibiotic usage was becoming commonplace in the turkey industry. Tim and Joan felt that the quality of the final product was starting to decline. They made the decisions about animal raising practices that the company still follows to this day.

“While at the time Diestel was considered a fairly forward-thinking brand, what Tim tried to do was to maintain the farming practices that his father and great-uncle had established. It wasn’t innovation so much as it was sticking to traditional practices, while the industry was moving into different areas,” Orrock explains.

The Diestel turkey soon became known for the characteristics that continue to make the brand stand out in the marketplace today: outdoor access, no antibiotic usage, slower growth that allows the birds to develop better texture, flavor and fat layering. The brand grew thanks to an antibiotic-free, range-grown in Sonora turkey, processed by hand and sold into the Bay Area.

Today, Diestel Turkey Ranch adheres to those same principles. However, staying a “simple” brand is actually an incredibly intricate process.

“Our turkeys are grown significantly longer than most of our industry peers, which is certainly more expensive, but we think makes a better-quality product,” Orrock explains. To make that process work with whole turkeys in a variety of different sizes, it has to use different breeds in order to meet every weight class.

“At any given point, we’ll have six different breeds of turkeys on the ground, and generally both the hen and tom of those, so effectively 12 different turkeys. They all serve different purposes, but the primary goal of using multiple breeds is to control weight through genetics or breed rather than through age,” he adds.

Diestel Turkey Ranch sells anywhere from a 6-pound turkey all the way up to more than 30 pounds. If the company were to do that with one breed, it would have to process birds at different ages to meet the weight requirement. However, Orrock explains that if the company were to do that, each weight category of turkey would have a different appearance, different yield and a different flavor and texture. The consumer would never get a consistent eating experience. The way to provide that consistency is to have breeds of turkeys that naturally fit into the appropriate weight category when they reach the harvesting age. The Diestel Petite Hen at 20 weeks old weighs 13 to 14 pounds live, which makes for an 8- to 10-pound eviscerated turkey. The 30-pound whole turkey comes from a completely different breed, but is also processed at roughly 20 weeks. 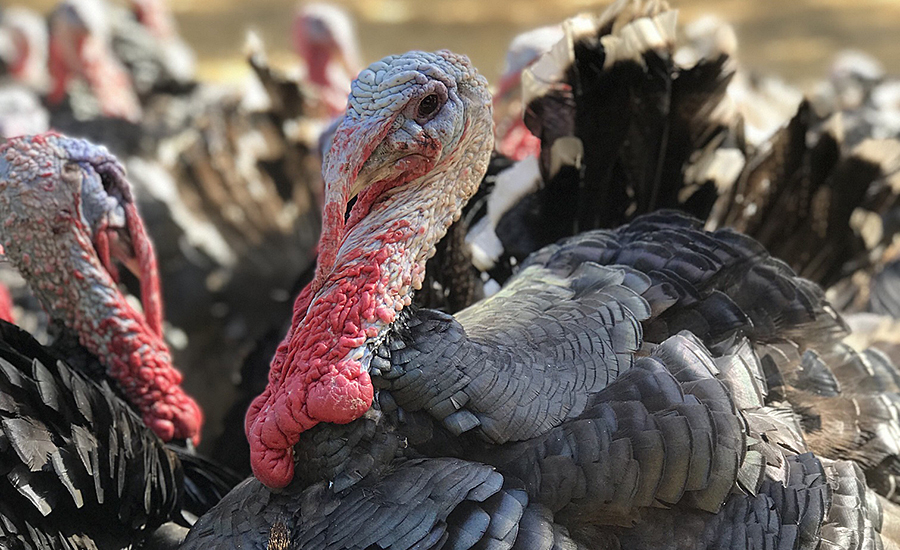 When placed side-by-side, a packaged 8-pound Diestel turkey and a 30-pound turkey obviously would be different sizes. However, the physical characteristics of the two turkeys would be very similar, as would the meat-to-bone ratio, texture, and most importantly, the taste.

Diestel’s traditional production methods have earned many modern certifications. It offers a Non-GMO Project verified turkey, an heirloom turkey that is certified organic, and all of its birds are at least GAP (Global Animal Partnership) Step 2 or higher.

Orrock grew up in Sonora and was friends with the Diestel children. He moved to San Francisco after college to work as an accountant. When he and Heidi married, they returned home. Heidi went to work in sales, customer service and marketing. Orrock initially worked as the chief financial officer before being named president. He oversees areas of the business like accounting, finance and human resources. Jason Diestel, the third partner, is the vice president of operations and oversees the live operations. He is deeply involved in the processing facilities as well. In addition to the slaughter operation in Sonora, the company has a further processing plant in nearby Chinese Camp. The management structure, with the major duties divided into thirds under the oversight of Tim and Joan, has proven successful.

“Not only do we have different skills and different interests, but I think each of us knows that the other two are better in their given areas, so it works really well. It takes all three of us here, that’s for sure,” Orrock says.

One of Jason Diestel’s passions is sustainability initiatives, both on the farm and in the plant. In those areas, the traditional turkey company is on the cutting edge of the poultry industry.

“There is a tremendous amount of traditional chemicals used in meat processing, and there are a lot of good food safety reasons on why that’s the case,” Orrock explains. “From our perspective though, it’s overdone, and you can produce safe food without so many chemicals, particularly chlorine and paracetic acid.”

The company’s principals have made reducing chemical usage a key initiative over the last eight years. The company still uses PAA and chlorine — at much lower levels than others in the industry — but it has incorporated probiotic cleaners on the farms and in the plants. Probiotic foam is sprayed on the facility floors; even the hand soap in the bathrooms has probiotics.

“That’s been a huge part of our chemical reduction initiatives and has been hugely effective even in places where traditional cleaners haven’t been able to accomplish the goals that we’re after,” Orrock says.

One of the additional benefits is that the probiotics have a long-lasting effect. Most traditional chemicals have an instant lethality but no residual effect. Probiotics, though, introduce beneficial bacteria into the environment, creating a type of living barrier that consumes the biofilm that harmful bacteria would otherwise use. Orrock adds that the probiotics are USDA approved, less caustic on the equipment than other chemicals and are safe for the environment and employees. Diestel also uses ozone in its processing facilities. 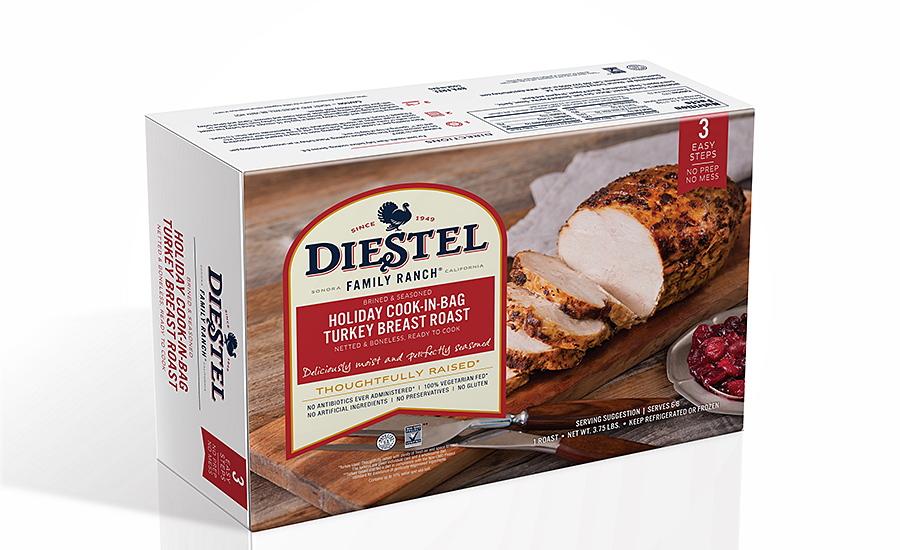 “Ozone, with the proper dwell time and concentration, has a 6-log reduction for Salmonella, which is the same lethality for cooking turkey at 165F, and it’s chemical free and totally safe,” he says.

Jason Diestel is responsible for those innovations. He experimented with probiotics on the turkey farms, using them to clean the water systems. The results were so good that they were added to plant maintenance programs.

While Diestel Turkey Ranch has worked behind the scenes to improve its food safety and the health of its employees, it has also been busy working to please its consumers with new products. Orrock notes that industry-wide sales of raw, whole turkeys for Thanksgiving have been in decline in recent years, so the company has released several new fully cooked varieties. In recent years, the company has released an apple cider-brined smoked turkey and a bone-in breast, a pecan-smoked turkey and a cook-in-bag 4-pound netted boneless roast.

Along with whole turkeys, Diestel offers deli meats, burger patties, bacon and snack sticks, to name a few of their further-processed items. Most of those products are produced in its Chinese Camp location, though some items, such as franks and retail sliced deli meats, involve co-packers. One of its latest offerings is a sous vide meat loaf, available in a traditional or Florentine style.

“While we want to continue to grow our year-ground business, we do place significant focus on continuing to offer holiday products that really are more aligned with where consumers are and where they are headed, which we believe is definitely not in raw, whole turkeys,” Orrock notes.

For more information about Diestel Turkey Ranch, including its composting operations and its production practices, visit www.provisioneronline.com.